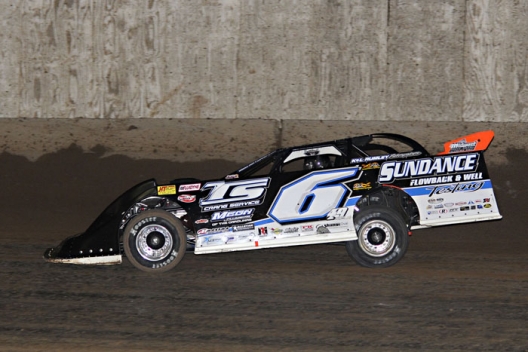 Third-starting Darrell Lanigan of Union, Ky., got within a few lengths of Davenport at halfway and again on lap 22, but Davenport edged away in the race’s late stages to capture the third round at the Arizona event. Patience in traffic helped Davenport keep his pursuers at bay.

“I really didn’t know where they were gaining on me at, because I’d pull away and (crew member) Bryan (Liverman) would (signal) me they would gain back in traffic, which I figured they would, because I would hit it first,” Davenport said. “I just tried to be patient with ‘em and pick my lines where I could get a good run off the corner and just not kill my momentum too bad.”

Lanigan finished a half-straightaway behind in second while polesitter Shane Clanton of Zebulon, Ga., was third. Seven-time World of Outlaws Sprint Car champ Donny Schatz of Fargo, N.D., came from ninth to finish fourth and Billy Moyer Jr. of Batesville, Ark., rounded out the top five. Davenport lapped all but 14 competitors in a race where the lone caution flag appeared on the eighth lap for a slowing A.J. Diemel.

Lanigan scored his second top-five finish of the miniseries and while he got within striking distance of Davenport, his chances for victory faded over the final laps.

“Not quite enough for ‘em. We’re getting closer and closer … hopefully here at the end of the week we can get us a win,” said Lanigan, a two-time winner at last year’s Wild West Shootout. “We had a good car there at the end. I just wish we could get around that lapped traffic a little quicker.”

World of Outlaws Late Model Series champion Clanton, who joined Davenport for a potent front row of reigning national touring champs and Georgia standouts, scored his best finish of the week but knows he’s got work to do to outrun Davenport, the Lucas Oil Late Model Dirt Series champ.

Davenport ran the high side most of the way on a smooth track that had streaks of black, but lapped traffic he hit before halfway caused a few problems.

Other competitors were “blowing just enough grit across the racetrack to make it a little slippery (instead) of just the black (surface) it was. But yeah, this car as phenomenal. I could drive around the top, the bottom, the middle, you know, once I found my rhythm there — especially in lapped traffic, it kind of messed me up a little bit.

“But other than that, man, I can’t say enough for (crew chief) Kevin Rumley and (engine builder) Lee Roy (Rumley) back home watching, Gaynell, everybody else back home watching. Bryan (Liverman) has been doing a phenomenal job. Heath came on to help us out. Baird Transport has come on board this year to help us out, and everybody back at the Longhorn shop, I can’t thank them enough.”

“I don’t know. Like I said before, it’s hard to be perfect in this sport. Tonight we started dead last in our heat and had Clanton and Lanigan, and two or three other really good guys," said Davenport, who was hampered in the opener by a disqualification in his heat race for failing to report directly to the scales. "I don’t know, we’re going to give it our best shot. I’d like to have that other one under our belt. I think we could definitely get one more, maybe, unless things go really the wrong way. we’ll just have to wait and see.”

Miniseries drivers take their final day off of the week Thursday before returning to action Friday with a $5,000-to-win event. Pay-per-view coverage begins at 5:15 p.m. Mountain Time with hot laps at 5:30 and racing at 7.

Notes: The passing-points format calls for locking in 15 drivers (with the heat winners guaranteed) into the feature field; because of a lineup error, 16th-starting Ryan Gustin was included in the feature field without running a consolation race, thus 25 drivers started the feature. … Ricky Thornton Jr. of Chandler, Ariz., drove the J.R. Haley-owned No. 33x Black Diamond car driven previously by Vic Hill of Mosheim, Tenn.; Thornton finished eighth. … Besides Thornton, there were two other new miniseries entries on Wednesday: Marshall Miles of Sierra Vista, Ariz., and fourth-place finisher Donny Schatz, who came to Tucson after competing in Australia sprint car action.