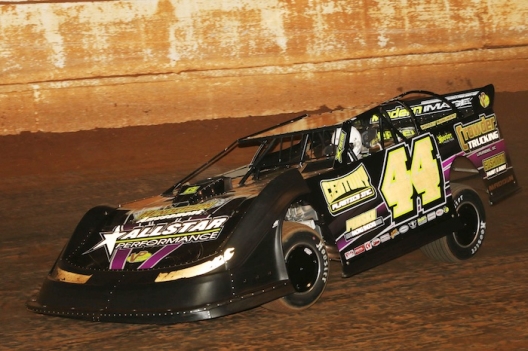 “It’s just been really amazing,” the 40-year-old Madden said after his continuing his torrid late-season surge since returning from a three-month summer break from racing. “That’s just about all I can say about it.”

The flag-to-flag Gobbler victory worth $10,000 was the latest in a string of success for Madden, who returned from an extended layoff with a new Longhorn Race Car on Sept. 6 and hasn’t looked back. He’s made 15 starts and rung up six wins, 12 top-five and 14 top-10 finishes in just two-and-a-half months of competition.

“I’ve been very blessed to just have the success that I’ve had coming back,” said Madden, whose first-place earnings during his hot streak total $65,000.

Saturday night’s score might have been one of Madden’s most dominant performances. He roared off his outside-pole starting spot to grab the lead from polesitter Dale McDowell of Chickamauga, Ga., at the initial green flag of the feature and never faltered thereafter, controlling the action from start-to-finish on a track that took rubber and developed one primary groove.

McDowell, 49, chased Madden throughout the distance but was unable to offer a serious challenge. The driver of the Team Dillon Racing Warrior settled for a runner-up finish, duplicating his second-place effort to Madden in the Nov. 14 Southern National Bonus Series event at Boyd’s Speedway, the Ringgold, Ga., track that McDowell co-promotes.

Madden felt fortunate that he was well positioned at the start of the headliner to take advantage of the conditions.

“They tried hard with the racetrack to give us a racing surface to race on,” said Madden, who recorded his third win in the last four Southern Nationals Bonus Series events run over the past six weeks. “The thing just kind of got one-lane there and we was in the right position on the start to get the position. That’s just the way it fell tonight.

McDowell acknowledged that the initial green flag was the key to the race, which was slowed by just a single caution flag on lap 62.

“When we redrew (for starting position among heat winners), we may have needed that outside line,” said McDowell, who raced at a track located about 45 minutes northeast of his Georgia home. “The outside was better tonight when the bottom left.”

Nevertheless, McDowell’s hopes of staying close enough to Madden to seize on any stumble by the leader were hampered by tire wear.

“Right there at the last we lost tire,” McDowell said. “Me and Randy (Weaver) lost a little bit more tire than Chris did. We just slicked our tire and kind of got in line and rode.”

The 46-year-old Weaver, meanwhile, simply found himself behind two strong rivals with little racetrack left to battle them.

“I think we had as good a car as Chris in the race but the racetrack kind of dictated that (third-place finish),” said Weaver, who closed out a satisfying campaign in which he won 12 times in 28 starts. “This time of year you never know what you’re gonna get (with the track surface), but at least we got to race one more time this year.”

Madden was certainly happy to have another chance to extend his hot streak before settling down for the winter.

“We’re gonna try to look for some more races for next weekend,” Madden said with a sly smile.