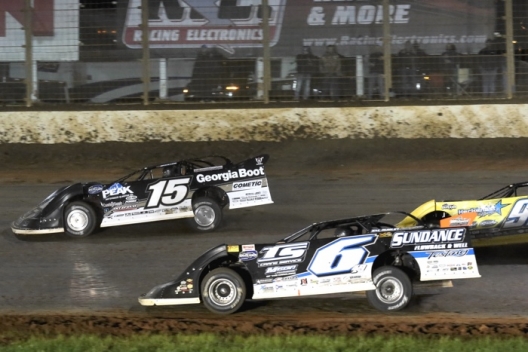 CONCORD, N.C. (Nov. 8) — Jonathan Davenport of Blairsville, Ga., topped off his dream 2015 season with a final flourish, rolling to a convincing victory in Sunday's 50-lap Bad Boy Buggies World of Outlaws World Finals finale at The Dirt Track at Charlotte.

The 32-year-old superstar passed Darrell Lanigan of Union, Ky., for the lead on lap 31 and never looked back in the season-ending World of Outlaws Late Model Series event, which was postponed one day by wet weather.

The $12,000 triumph was the 22nd overall of a historic 2015 campaign for Davenport, whose five crown-jewel wins and Lucas Oil Late Model Dirt Series championship helped push his earnings for the year over the $600,000 mark.

“Just to cap off this season we’ve had with this makes it extra special,” said Davenport, who previously won World Finals features in 2010 and ’11. “We can go into the winter with a big smile.”

Starting sixth in the 31-car field, Davenport steered his K&L Rumley Longhorn Race Car to third on the race’s opening circuit and reached second place by lap five. He briefly fell to third place when Lanigan passed him and early pacesetter Chris Madden of Gray Court, S.C., for the lead on lap 11, but the indomitable Davenport regained second from Madden on a lap-18 restart and snuck underneath Lanigan for the top spot in turn two on the 31st lap.

Davenport dominated the remainder of the distance, crossing the finish line 1.557 seconds in front of the polesitting Lanigan for his fourth World of Outlaws Late Model Series victory of the season and the sixth of his career.

Madden settled for third place after starting from the outside pole. Jimmy Owens of Newport, Tenn., who won the World Finals finale in five of the past six years, finished fourth and Lanigan’s Clint Bowyer Racing teammate, Don O'Neal of Martinsville, Ind., climbed forward from the 12th starting spot to place fifth.

Shane Clanton of Zebulon, Ga., was never a factor despite starting third, fading backward when the green flag flew and finishing a quiet ninth. But he still showed plenty of enthusiasm after the race when he celebrated his first-ever WoO LMS championship, which he clinched by starting Friday night’s World Finals A-Main.

“It’s a dream come true,” the 40-year-old Clanton said after being presented his WoO championship trophy during the post-race ceremonies. “We’ve won a lot of big races but we’ve never put a whole season together. To put one together like we have this year, it’s pretty special.”

Clanton won a career-best 10 WoO LMS features and registered 34 top-five and 37 top-10 finishes in 41 features this season driving his father-in-law Ron Davies’s Capital Race Cars. He led the standings from start-to-finish, ending the schedule with a commanding 174-point advantage over Josh Richards of Shinnston, W.Va.

“It’s just a testament to what we’ve done all year,” said Clanton, who will receive his $100,000 WoO LMS title check during the tour’s awards banquet that was rescheduled for Monday at 1 p.m. at the Great Wolf Lodge in Concord, N.C. “Consistency pays off —you look at the record, and we almost tied Darrell (Lanigan) for top-fives in a season and we had like three less races than he had.

“We made a wrong tire choice tonight and didn’t groove them just right, but we’ll come back next year and defend our title and maybe we’ll be standing up here again.”

Davenport preceded Clanton on the post-race winner’s stage. He enjoyed ending a World Finals that began with subpar time-trial results on a high note.

“We didn’t start off too well this weekend,” Davenport said. “We had ignition problems Thursday night (during qualifying), but Friday night we finally got them worked out and I knew we had a good piece here.”

Davenport was able to make his winning move despite the fact that the racing surface had already effectively locked down along the bottom groove. He seized the moment when Lanigan left the door open.

“I know about running in the rubber,” Davenport said. “I’ve been there enough times to know that once we caught traffic we had to get to the bottom. But (Lanigan) stepped out and tried to get around a lapped car on that outside and I snuck up through there.

“I knew he messed up when he went in the corner there. I just made sure I didn’t mess up, just drive my line and give him plenty of room to come back on the outside.”

Tire wear was an issue for Davenport, but he had enough rubber left to hold on.

“(Crewman) Bryan (Liverman) talked me into a little bit different tire choice than I wanted to go with, but I guess it paid dividends,” Davenport said. “We was softer than Lanigan and all the guys that started in front of us. We couldn’t have made it many more laps, but we made it just enough.”

And Davenport got a victory in a race that might pay a relatively modest $12,000 to win but carries much more importance.

“It should pay 50 grand,” Davenport said with a smile when asked about the high-level competition of the World Finals. “It definitely is like a crown-jewel with everybody who comes here. You ain’t never gonna see 86 cars for $12,000 anywhere else.

“It’s just the atmosphere of being at Charlotte — pretty much the racing capital of the world, and you got the best dirt drivers in the world with the three series — that makes this race definitely one you want to win. It’s just a fantastic way to cap off the year.”

Lanigan, 45, led laps 11-30 after blasting around the outside of both Davenport and Madden to assume command following a restart, but he couldn’t recover after allowing Davenport to slip past him for the lead on lap 31 when he slid high in turn two while working lapped traffic.

“We had a really good piece,” Lanigan said of the Club 29 car he debuted for Clint Bowyer Racing — his recently-acquired ride for 2016 — at the World Finals. “We just got on the outside of a lapped car and he kind of run me up the racetrack and that left the bottom open for Davenport.”

The 40-year-old Madden, meanwhile, wasn’t able to match the speed of Davenport nor Lanigan once the 4/10-mile oval’s surface locked down.

“We had a real good car all weekend,” said Madden, who also finished third in Friday’s A-Main. “We just tightened up too much for the feature. When they dropped the green we were running extremely well, but then the racetrack got a little more grip to it and we just couldn’t steer across the center and these guys were a little bit better.”

Six caution flags dotted the event. Friday-night winner Brandon Sheppard of New Berlin, Ill., slowed to trigger yellow-flag conditions on lap 18 and 34. Other cautions flew for Eric Wells of Hazard, Ky., who spun in turn four and collected Jordan Yaggy of Rochester, Minn., on the opening circuit; Morgan Bagley of Tyler, Texas, who slowed with a flat left-rear tire on lap one; James Rice of Verona, Ky. (turn-three spin on lap 10); and Casey Roberts of Toccoa, Ga., who slowed with mechanical trouble while running fourth on lap 41.

With the completion of the WoO Sprint Car A-Main (won by Joey Saldana) at 6:35 p.m., only the 50-lap WoO Late Model headliner remains on the World Finals slate.

Light drizzle began falling during the second heat and continued throughout the remainder of the preliminaries, but the precipitation was never hard enough to stop the action. … Darrell Lanigan and Shane Clanton were the only heat winners to triumph with a margin over one second. Lanigan’s Heat 1 victory came by 1.075 seconds over Scott Bloomquist, while Clanton absolutely dominated Heat 2 by 6.969 seconds over Casey Roberts, who barely nipped Gregg Satterlee for second place. … Jonathan Davenport made a slick move at the start of the third heat, swinging his car high rolling through turn four to take the green flag and surging from his fourth starting spot to the lead by turn one. “There was just a little bit brown (moisture) coming off turn four on that start and it just gave me a little extra launch,” said Davenport, who went on to victory. … Matt Westfall spun in turn two on the first lap of Heat 1 but rallied to finish fourth — one spot ahead of his Best Performance Motorsports teammate Brandon Sheppard, the Friday-night feature winner who had to make a comeback as well after slipping from fourth to eighth when he slid high in turn two on a lap-four restart. … Chub Frank got into the turn-four wall on lap two of the third heat, forcing him to the pits with a crunched rear deck. … Chris Madden won the fourth heat after swapping the lead twice with Josh Richards. “That was fun,” said Madden, who lost the top spot to Richards on lap two but regained it on the fifth circuit. “That was awesome to put on a show for the fans. We came out with the win and that makes it even sweeter for me.” … Mike Marlar appeared headed to a third-place finish in Heat 4 but slid sideways on the final lap and contacted an inside marker tire in turn three, dropping him to 11th in the finishing order. … Jimmy Owens, who has won the World Finals finale in five of the last six years, earned a feature redraw berth with his victory in Heat 5. … Dennis Franklin rammed the rear end of Steve Francis’s car between turns one and two as Francis made a pass for second on the first lap of Heat 5. The contact left Franklin’s car with nose damage that caused him to fall back in the pack. … Billy Moyer Jr. turned back challenges from Don O’Neal to capture the sixth heat.

Overcast, breezy conditions with temperatures in the mid-50s prevail for Sunday’s postponed program. … A total of 68 cars were signed in for Sunday’s WoO Late Model card, down 18 from the 86 cars that participated in Thursday night’s time trials. … Among the drivers who scratched from Sunday’s action to head home early were Randy Weaver, Jason Feger, Earl Pearson Jr., Gary Stuhler, Austin Smith, Ross Robinson, Austin Kirkpatrick and long-distance Colorado travelers Dan Shepherd and Scott Lewis. … Rick Eckert said his Longhorn Race Car sustained some significant damage in a multi-car tangle during Friday night’s feature but he has it patched up and ready for competition. “It’s got a dent in every side of it and it ain’t pretty,” he said, “but it should be OK.” … The rotation for Sunday's heats will be WoO Sprint first, WoO Late Models second and Super DIRTcar Series big-block Modifieds last. The first WoO Sprint Car heat race took the green flag at 2:10 p.m. and the first three (of six) prelims spun off quickly, but during the fourth heat a car rode the turn-four wall and got into the catch fence; after a 29-minute delay to repair the broken cable, the action restarted just after 3 p.m. ... The first WoO Late Model heat began at 3:25 p.m. ... With the postponement of Saturday night’s program to Sunday, the 2015 WoO Late Model Series awards banquet (as well as the WoO Sprint Car ceremony) scheduled for Sunday evening have been reset for Monday at the Great Wolf Lodge in Concord, N.C. The move sets up a rare 12 noon mid-week awards banquet “luncheon.” …