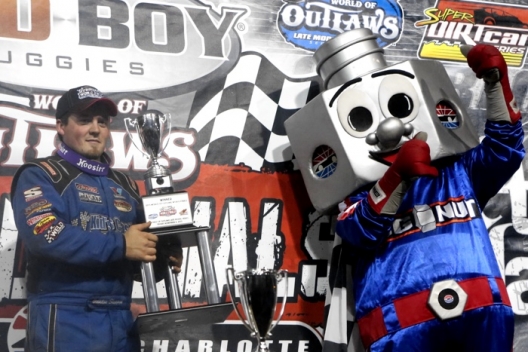 Taking advantage of the pole starting spot he drew after winning a heat race, Sheppard grabbed the lead at the initial green flag and never looked back en route to a rich $12,000 victory in Friday night’s 30-lap Bad Boy Buggies World Finals A-Main for the World of Outlaws Late Model Series at The Dirt Track at Charlotte.

The feature’s scheduled 50-lap distance was cut by track officials due to the length of the racing program, which was stretched well past midnight by a delayed start due to morning rain and two crashes in the accompanying WoO Sprint Car division that forced breaks in the action so track crews could repair damaged catch fencing in turns two and four.

Sheppard, 22, kept Shane Clanton of Zebulon, Ga., at bay throughout the middle portion of the blockbuster doubleheader weekend’s first Dirt Late Model headliner to triumph by 0.634 of a second over the 40-year-old star, who officially clinched the 2015 WoO points championship by simply starting the evening’s feature.

Chris Madden of Gray Court, S.C., finished solid third, nearly two seconds behind the victor at the checkered flag after he started sixth. Outside-polesitter Darrell Lanigan of Union, Ky., slipped to a fourth-place finish in his first start driving for NASCAR Sprint Car standout Clint Bowyer’s Georgia Boot-sponsored operation and Josh Richards of Shinnston, W.Va., completed the top five after slipping from fourth to ninth on the race’s opening circuit because he bicycled between turns one and two and lost ground.

Clanton, whose $100,000 WoO title came in his 11th season as a circuit regular, improved one spot from his third-place starting position in the event. He drew within a couple car lengths of Sheppard’s Rocket Chassis machine on the final circuit but couldn’t quite pull his Capital Race Car close enough to offer a serious challenge.

In the process of registering his first-ever top-five finish in World Finals competition, Clanton did manage to make Sheppard sweat at least a little bit.

“My right-rear (tire) would get to working after we’d get five or 10 laps and I’d get really tight,” said Sheppard, who landed his sixth career WoO feature win. “The car would get to be a handful, especially in (slower) traffic, and I messed up one lap and jumped over the cushion down there in (turns) three and four and (Clanton) next to me (at the flagstand).

“Right then I knew I was either gonna run second in this race or I was gonna haul that thing off into one and give it all she had to stay ahead of him. So that’s what I did — just drove it in there as hard as I could. Luckily, it stuck, and we made it to the finish line.

“Everything just fell our way,” he added, “but everybody knows you gotta have a little luck in this game to be successful.”

Sheppard was thrilled with the final result, which represented his second WoO victory of the 2015 season. He previously was triumphant on the national tour in the April 18 Illini 100 at Farmer City (Ill.) Raceway.

“It means a lot to win this,” Sheppard said. “A win here at Charlotte — it’s not a crown-jewel, but it should be. It’s an amazing feeling to win here in front of this crowd and at a facility this nice.”

And Sheppard almost didn’t even enter the World Finals because his family-owned team ended its season after the Oct. 17 Dirt Track World Championship event. His friendship with Randall Edwards, the Best Performance Motorsports crew chief who has spent the 2015 tutoring the team’s up-and-coming driver Matt Westfall of Pleasant Hill, Ohio, led him to an unexpected ride for the huge season-ending event.

“It was kind of a last-minute deal,” Sheppard said of the details behind his teaming with Westfall and Best Performance team owner Eric Brock for the World Finals weekend. “I was originally gonna come crew for them, but Randall just said, ‘Well, why don’t you just come drive?’ I said, ‘Why not?’ I guess it was a good choice.

“We just put it all together,” he added. “I went up there Monday (to the team’s shop in St. Henry’s) and put my seat in and everything just worked out.”

Four caution flags and one red flag dotted the event.

Cautions flew on lap one for Casey Roberts of Toccoa, Ga., who slowed on the backstretch; lap seven for Jason Feger of Bloomington, Ill., who was hampered by mechanical trouble; lap 17 when Randy Weaver of Crossville, Tenn., spun on the inside of turn four; and Brandon Overton of Evans, Ga., who slowed in turn four moments before Rick Eckert of York, Pa., Chad Hollenbeck of Kingsley, Pa., and Austin Smith of Cedartown, Ga., tangled in the second corner.

The race’s lone red flag was needed for a grinding multi-car crash that occurred on lap 18. A mid-pack scramble swept up Hollenbeck, Smith and Rick Eckert of York, Pa., but no injuries were reported.

Sheppard’s victory came in front of a packed grandstand at Charlotte's 4/10-mile oval as the track hosted the first of back-to-back tripleheaders featuring the WoO Late Models, the World of Outlaws Sprint Cars and the Super DIRTcar Series Big-Block Modifieds. The World Finals conclude on Saturday with another tripleheader featuring the season finales for all three divisions. Gates open at 3 p.m., hot laps are scheduled to start at 4 p.m. and racing is set to begin at 5 p.m.

With the late hour — at 12:55 a.m., the checkered flag of the WoO Sprint Car B-Main finally completed the program's marathon series of preliminary events that began with the first WoO Late Model heat at about 6:50 p.m. — officials announced that the feature distance in all three divisions has been shortened. The WoO Late Model A-Main has been reduced from 50 to 30 laps, the big-block modified headliner has shrunk from 40 to 30 laps and the WoO Sprint Car feature will run 25 laps rather than its originally scheduled 30.

As the clock struck 1 a.m., track crews were finishing some quick reconditioning work on the rough cushion with the WoO Sprint Car feature set to roll out first. The WoO Late Model and big-block modified features will follow.

Drivers had to deal with a thick berm that developed in the middle of the track through turns three and four. … WoO Sprint Car champion Donny Schatz stopped with a flat right-rear while running fifth on lap eight of the second heat. … Floridian Austin Kirkpatrick got the worst of a lap-one restart tangle during the third heat when contact from Donald Bradsher turned him toward the turn-four wall. As Kirkpatrick slid across the track he was tagged by Dale McDowell, sending Kirkpatrick’s homebuilt car bouncing into the air. Kirkpatrick’s machine came down hard on its side and swapped ends before coming to rest nosed against the concrete; the 22-year-old escaped without injury. … Chub Frank won the third heat after surging from fourth-to-first on the opening lap after polesitter Steve Francis hit mud on the inside of turn two and pushed into second-starter Mike Marlar, opening the door for Frank on the bottom of the track. … Jimmy Owens was penalized two spots for firing early from his outside pole position on the second attempt to start the fourth heat, but he recovered to finish third and transfer to the feature. … Brandon Sheppard made a memorable move to win the fourth heat, blasting his Best Performance Motorsports Rocket around the outside of the track to vault from third-to-first on a lap-five restart. … Josh Richards was victorious in the fifth heat in his first competitive start with a new Rocket car. … Scott Lewis and Kerry King Jr. were both towed off the track during after slapping the outside wall in separate incidents. … First-time World Finals participant Max Blair spun into the infield on the backstretch on lap three of the sixth heat, drawing a caution flag. … Following a lap-six restart, the sixth heat race turned wild. First, Scott Bloomquist and Don O’Neal came together on the backstretch while battling for second; Bloomquist sustained right-front damage, hit an inside marker tire in turn four and slipped out of a transfer spot. Then, on the final lap, O’Neal got hung up on the berm in turn four while running second and spun into the infield where he slid backward into a tire-protected jersey barrier just feet from the finish line, allowing Jonathan Davenport and Morgan Bagley to finish second and third, respectively.

Though there appeared to be no weather concerns that would hamper Friday night's racing program, rain — including a signficant downpour — rolled through the already water-logged Charlotte area late this morning, dousing the racing surface and forcing officials to adjust the evening's schedule.

Track and World Racing Group officials gathered for a meeting at 1 p.m. and released a new tentative Friday schedule that pushed the originally announced start times back one hour, putting the Late Model drivers' meeting at 4 p.m. and track wheel-packing for the DIRTcar big-block modifieds at 5 p.m. But with cloudy, misty conditions continuing to prevail as of 3:50 p.m. — preventing track crews from getting onto the racetrack to begin the run-in process — officials again pushed the tentative time for the first cars to hit the track to 6 p.m.

Surface reconditioning progressed ahead of schedule, however, and big-blocks began rolling onto the speedway shortly before 5:45 p.m.

The only division scheduled to hot-lap is the WoO Sprint Cars. The first time the Late Models turn circuits around the 4/10-mile oval is supposed to be when the class's heat races kick off the program.