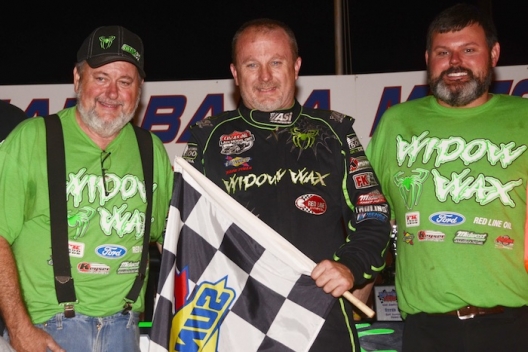 Starting on the pole, Owens edged ahead of fellow front row starter Chris Madden of Gray Court, S.C., at the drop of green flag. Holding off challenges from Randy Weaver of Crossville, Tenn., and Clint Smith of Senoia, Ga., Owens notched his second victory in four years in Alabama’s richest event.

“I had a lot of clean racers behind me,” Owens said in victory lane. “I knew the trick was going to be getting the lead on that start because the track was already not as good as we wanted it to be. But it’s all you can do with the weather and stuff in the area. I got to thank Barry Wright and Bryan Rowland and Widow Wax. It’s pretty awesome. We’ve won a lot of races with a lot of cool people, and it’s great to be in victory lane with Barry (Wright).”

Multiple yellow flags slowed the 100-lapper, with early frontrunners Scott Bloomquist of Mooresburg, Tenn., and Dennis Franklin of Gaffney, S.C., among drivers pitting and returning to the tail of the field. But out front, Owens couldn’t worry about a similar fate.

After an up and down 2015 season, Saturday was a special night for Owens, who picked up the victory in a new Barry Wright car. He’s piloted a Club 29 Race Car for the last couple of seasons.

“Last Thursday, this car was a bare, unpainted frame, and Barry Wright and his whole crew have worked their tails off,” Owens said. “I just pretty much showed up and drove. It’s pretty awesome … we seem to work good together. It was definitely a fun weekend and I look forward to more.”

“We had a good car,” Weaver said. “I love racing down here and was hoping to pull one off for my car owner. It was fun. Hats off to Jimmy (Owens) … it’s good for him and Barry (Wright) and them guys. We’ll click one of these off one day. I’ve just got a good group of people around me and hopefully we can pull it off maybe next year.”

Racing as high as second, Smith said he hated to see the late-race cautions. But overall, he was pleased with his National 100 weekend.

“The caution flag wasn’t my friend there at the end,” Smith said. “My car wouldn’t go on the restart, it was just stumbling around. That’s why I couldn’t fire with (Randy) Weaver on the restart. But if it went green, I was just sitting there cruising behind the No. 20. I think I had something that could drive up with him … he’d had have to made a little mistake. But a top-three here, where we stared out, I’ll take it. We’ll just lick our wounds and go on to the next one.”