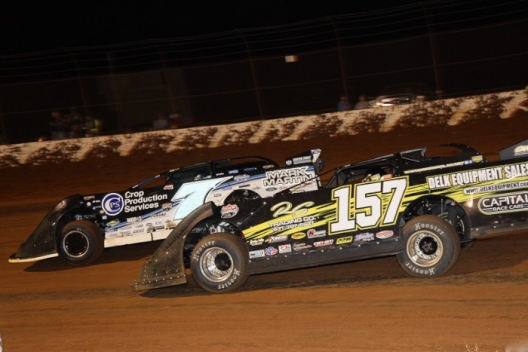 MERIDIAN, Miss. — Mike Marlar of Winfield, Tenn., won a three-driver dogfight in the late stages of the 21st annual Coors Light Fall Classic for a $15,000 payday at Whynot Motorsports Park.

Marlar overtook Jared Landers on the 70th lap, then survived challenges from the Batesville, Ark., duo of Landers and 10th-starting Billy Moyer over the final six laps to capture one of Mississippi’s richest races.

While Marlar’s harder compound tires on the right side benefitted him during a long mid-race run, he knew he might be vulnerable when a late caution appeared in the 100-lapper.

“We had that caution with five (laps) to go and there I am out there on them hard tires, and Billy’s on four soft ones,” Marlar said. “It was super-exciting the last little bit, but I managed to squeak by and hold 'em off there on that restart.”

Moyer briefly edged ahead of Marlar exiting turn two in the final laps, but Marlar held on in a dramatic chase to the checkers, edging Moyer by less than half a second. Landers, who led laps 3-69, made a last-ditch charge on the high side that saw his car climb the frontstretch wall just before the checkered flag.

“I was trying to keep (Moyer) down there, behind me, and chase Jared at the same time until my tires would light up, and then once that happened I was in pretty good shape,” said Marlar, who held the second spot most of the race. “Our car, we’ve got this new Capital Car, and it’s been really good. When she’s hitting on eight (cylinders) and the tires are gripping, it’s a really good piece.”

Marlar notched his second 2015 payday of at least $15,000 — the first time he’s done that in a single season since 2004 — while Moyer and Landers settled for the second and third spots. Chris Simpson of Oxford, Iowa, came from the 15th spot to finish fourth while Dennis Erb Jr. of Carpentersville, Ill., led the first two laps, slipped back, then salvaged a fifth-place finish.

While Landers controlled most of the race, Marlar and Moyer had a long battle for the second spot with Marlar mostly running higher on the track and Moyer digging in the low groove.

“I kind of ran a little bit everywhere,” Moyer said. “I was better right around that bottom for sure. Mikey was kind of running through the middle (using) momentum. I tried that a little bit and really wasn’t bad, but you’re out there playing offense and defense both, and I just figured I’d stay there with what got me there and I was cruising around that bottom.”

Wishing he’d started a little closer to the front, the fifth-row-starting Moyer wasn’t too disappointed in falling short of his first Fall Classic victory. “We had fun there,” said the just-turned 58-year-old driver (he celebrated his birthday on Oct. 19) who recently announced plans to retire from full-time driving. “When the car’s good, it’s always fun. Everything worked well.”

Landers felt pressure from Marlar off-and-on throughout the first two-thirds of the race and wasn’t able to keep the Tennessean behind him.

“I don’t know if the right-front (tire) was a little soft and I started pushing, or just kind of slowed down and got out of my rhythm. I felt him on me somewhere — I said, 'Where is he?' ” said Landers, who got signals from a crew member that Marlar was running on the high side. “I said, 'Man, I’ve gotta start moving up there.' And I moved up there. About the time I felt him down (lower), I was trying to move up there on the top trying to get something to work. It’s always hard to hit it (right) the first time.”

“He did a heckuva job. He drove his butt off and won that race, and so did Billy. He came up there and snuck around me on the bottom. It kind of got interesting there at the end. Third place with these guys is still a good deal.”

A lap-28 caution appeared when McElhenney and Shane Clanton tangled while another yellow flew three laps later for a tangle that sent Spencer Diercks and Austin Rettig spinning. Austin Smith slowed to bring out a lap-63 caution and the final yellow appeared on lap 94 for debris.