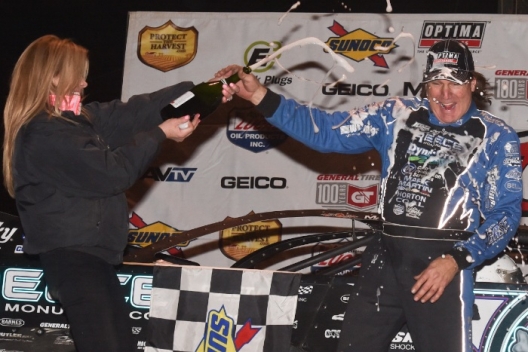 PORTSMOUTH, Ohio (Oct. 17) — Scott Bloomquist made history Saturday night, becoming the first driver to ever notch consecutive Dirt Track World Championship victories as he led flag-to-flag for a $100,000 triumph the 35th running of the event at Portsmouth Raceway Park.

Picking up victories in both rounds of Friday’s heat race preliminaries, Bloomquist started on the pole of Saturday’s 100-lapper, jumping to the lead at the drop of the green flag. The Hall of Famer backed up his 2014 victory with his third career DTWC win and a race-record payday.

“I was getting signals just kind of letting me know how far ahead I was,” Bloomquist said in victory lane. “We tried to pace ourselves, but we set a pretty strong pace. The car was just perfect all weekend. The way they did the format with the heat races and inverting and stuff, we come through both of them. Starting up front didn’t hurt. Early there probably could have been some passing. Late, it was pretty difficult to pass and we just had to just be patience and not try to push our luck.”

While second-running Jared Landers of Batesville, Ark., was able to close the gap between him and teammate Bloomquist in the early running, the track took rubber around the halfway point, making passing difficult. Bloomquist made his way to PRP victory lane for the second time this season.

“It just cleaned up,” Bloomquist said. “The bottom got clean and all the crumbs from the bottom just got the middle to the top sprinkled with just enough dust. It was really hard to see from looking at it, but I could tell a big difference. I went up there one last time late in the race and tried it on a lapped car and said, ‘Not again.’ It definitely was not like it had been earlier. Earlier, guys were running up high. But when that bottom cleaned up, that was it.”

“When the track got to one lane, pretty much rubbered up, I knew we was in trouble because the lapped cars could run the same times we were,” Landers said. “And the only way we could pass a lapped car is if he slipped a little bit. I just parked the bottom. I was like, ‘The only chance I have is if somebody gets in there and wads Scott (Bloomquist) or somebody up. I tried to give myself room and I’m happy the way it turned out.”

After scoring a victory in the Lucas Oil Series-sanctioned Lucas Oil Late Model Knoxville Nationals a Knoxville (Iowa) Raceway just a few weeks ago, Landers was pleased with another strong crown jewel performance. He fought back challenges from O’Neal in the early running.

“I kept watching my guy in the pits, he was giving me signals and I was like, ‘I know he’s close,’” Landers said. “I know I messed up a few laps and I knew I couldn’t make any error. If you let one of them guys pass you, you was going to get passed by a couple more right then. Second is where we needed to be.”

While third wasn’t quite the finish O’Neal was hoping for, the former DTWC winner said he was happy his team was continuing to improve.

“About halfway in, when it started streaking up there on the bottom, it was over with,” O’Neal said. “Wherever you was at is where you was going to finish unless you messed up. A good solid run for us, just not what we wanted at all. We’ve got to get a little better. The last couple months we have turned our program around, a lot of top-fives and stuff. We’ve just got to keep digging.”

Notes: R.J. Conley's fourth-place finish was his best ever in the DTWC. ... The race was slowed by three cautions. The first yellow waved on lap three when Jimmy Owens slowed on the racing surface, turning in to the pit area to become the race’s first retiree. … Zack Dohm slowed in turn four to draw a caution on lap 20. … The final yellow flew on lap 30 when Bobby Pierce slowed with a flat tire.

10:21 p.m. (lap 63): Landers clears the lapped car of Jason Montgomery, closing the gap between the No. 777 and race leader Bloomquist.

10:05 p.m. (lap 23): Fourth-running Johnson slows down the backstretch and pulls in to the infield under green. Charging from the back of the field, Bobby Pierce has moved in to the top-10.

9:43 p.m.: Feature cars roll on to the frontstretch and pace laps get under way.

Polesitter Jackie Boggs charged to the lead at the drop of the green flag, with Mason Zeigler challenging second-starting Bobby Pierce for the runner-up spot. A yellow flag waved on the fifth lap for Mick Sansom. Austin Mills spun in turns three and four to draw a caution on lap six. A red flag fell on the ensuing restart when Russ Frohnapfel hit one of the infield barricades. Another yellow flew on lap seven when Boom Briggs slowed in turn four. Jon Hodgkiss spun in turn two to draw a caution on lap 12. Boggs led the remaining distance, with Pierce edging ahead of Chris Ferguson to grab the second and final transfer spot.

A yellow flag flew on the opening lap for a tangle in turns one and two involving Dennis Erb Jr., Tommy Bailey, Evyian Terry and others. Darrell Lanigan charged to the lead as the race took the green flag, with a battle ensuing between Devin Moran and Jason Jameson for the runner-up spot. Terry spun to draw a second caution on lap three. A yellow flag waved on lap eight when Brandon Sheppard slowed on the backstretch. Matt Melvin spun on the ensuing restart to draw another caution; third-running Jason Jameson retired under the yellow. Lanigan picked up the win in the second consolation, with Moran holding on to the second-place spot to transfer to the feature.

A yellow flag waved on the fourth lap when Charles Floyd spun in turn four. Michael Lake drew a second caution on lap seven when he slowed on the frontstretch. Earl Pearson Jr. advanced from the fifth starting spot, taking a commanding lead to win the first consolation. Fourth-starting Zack Dohm outdueled Doug Drown to grab the second and final transfer spot. Polesitter Rod Conley slipped to finish at the tail of the field, with outside front row starter Mike Marlar retiring early.

Action is set to get under way Saturday evening for the conclusion of the 35th annual Dirt Track World Championship, with the night’s races set up by the double round of heat race preliminaries contested Friday night.

Two-time and defending DTWC winner Scott Bloomquist of Mooresburg, Tenn., and Greg Johnson of Bedford, Ind., will make up the front row of Saturday’s $100,000-to-win feature.

With the top 16 drivers in Friday’s combined passing points already locked in to the main event, Saturday’s program will include three consolation races with the top two finishers from each race transferring to the feature.

Series and track provisionals will make up the final two rows of the 100-lapper. Saturday’s program will also include the Jim Dunn Memorial non-qualifiers’ event.

Five former DTWC winners are already locked in to Saturday’s 100-lapper, including last year’s race winner Scott Bloomquist of Mooresburg, Tenn., Don O’Neal of Martinsville, Ind., Rick Eckert of York, Pa., Jimmy Owens of Newport, Tenn., and Steve Francis of Ashland, Ky. … Jonathan Davenport of Blairsville, Ga., will clinch the 2015 Lucas Oil Series title just by starting the night’s main event. He rolls off from the 16th starting spot. … R.J. Conley of Wheelersburg, Ohio, and Jason Montgomery of Jackson, Ohio, are among drivers who have won features at PRP earlier this season who are locked in to Saturday’s feature, while other local favorites Rod Conley, also of Wheelersburg, and Jackie Boggs, will start on the front row of consolations. … Tim McCreadie of Watertown, N.Y., Steve Casebolt of Richmond, Ind., and Kyle Hardy of Stephens City, Va., are among drivers scratching from Saturday’s racing action after accidents on Friday night. The Chub Frank car that McCreadie flipped during Friday's heat racing was too damaged for further action; Casebolt's machine sustained significant front-end damage when he hit a car that spun in front of him on the opening lap of his first-round heat; and Hardy's car had its front-end beat up considerably when he was shunted into the turn-one wall during a second-round prelim. … Gregg Satterlee of Indiana, Pa., decided to head home early after performing poorly in Friday's program. ... Saturday’s program includes the Jim Dunn Memorial non-qualifiers’ event and a $4,000-to-win modified feature.