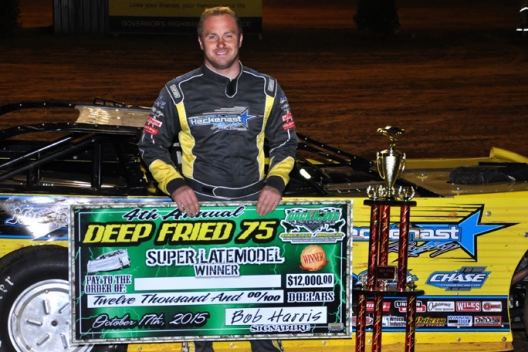 WHEEL, Tenn. — After dominating the middle to late portion of the fourth annual Deep Fried 75, Frank Heckenast of Frankfort, Ill., had to hold off a host of would-be challengers during a five-lap scramble to the finish following a caution on lap 70 of Saturday’s $12,000 season-finale at Duck River Raceway Park.

Heckenast managed to stave of the charge of Dale McDowell and the high-side rally of Ronny Lee Hollingsworth to collect his fourth win of the season and first since a $2,000 ALMS victory at Hartford (Mich.) Speedway back on Aug. 7.

The 2014 World of Outlaws Dirt Late Model Series Rookie of the Year dominated much of the race after inheriting the lead from Vic Hill of Mosheim, Tenn., when Hill was clipped by second-running Billy Ogle, Jr., of Knoxville, Tenn., on lap 26.

Heckenast led the final 49 circuits, but had to survive a final five-lap dash around the southern Middle Tennessee bullring before he could finally catch his breath. He won by .432 seconds over McDowell of Chickamauga, Ga.

Northport, Ala.’s Hollingsworth blasted around what was left of a narrow cushion from fifth to capture third on the final restart. Michael Chilton of Salvisa, Ky., was fourth ahead of Batesville, Ark., native Billy Moyer, Jr.

“It was really tough to be honest because my crew guy was telling me that they were on the top and bottom. My guy didn’t know where to (tell me to) go cause they were everywhere,” Heckenast said. “I figured McDowell was on the bottom.

“I kept watching the scoreboard and knew he was coming up. I just tried to keep it straight … keep it underneath me. I don’t know if I blocked him there at the end; I was just trying to do everything I could. It was a gamble there at the end. I’m just glad it worked out.”

McDowell made a race of it by methodically moving forward from his 11th starting spot. He was in the top five by the time the fourth of five caution flags waved on lap 44. He took third on the subsequent restart and was second by lap 52. His best shot at getting by Heckenast came following the final caution.

“I was really just trying to throw everything I had at it,” McDowell said. “He had a good smooth line there. I was just trying anything to make any kind of gain.

“These short tracks, I really like getting in the lapped traffic and just being patient and trying to work your way through the lapped traffic. It had to be a real good race for the fans, especially when we was two- and three-wide racing back there for fourth and fifth.”

Hollingsworth, meanwhile, was fifth on the final restart. With time running out, he darted to the top shelf for one last rally. He blasted by Moyer and then dropped Chilton from third to fourth, gaining two spots in the waning laps.

“They had that last restart and we really had nothing to lose getting up there and trying to gain a few spots,” Hollingsworth said.

Heckenast won Friday’s second heat race and started on the outside front row of the feature. On his way to his richest career payday and biggest win since claiming a $10,000-to-win World of Outlaws event at Bubba Raceway Park in Ocala, Fla., on Feb. 14, his toughest racing was done early in the 75-lapper.

He raced Hill, the polesitter, door-to-door, through the first seven laps before Hill finally cleared him and established control of the race. Hill’s blistering pace pulled him to the rear deck of the backmarkers by lap nine. Picking his way through traffic, Hill maintained the lead for the next 15 laps, though Heckenast had closed the gap to one car length as the pair sliced through lapped traffic.

“I was just trying to keep him in sight and keep the other guy behind me,” Heckenast added. “I knew we had a ways to go.”

A caution waved for Skylar Marlar on lap 23, giving third-running Ogle a chance to close in. Ogle got a huge run off the top side on the restart and drove by Heckenast. Two laps later he carried that high side momentum down the back straight. He caught Hill at the end of the backstretch and attempted to dive under him entering turn three, but clipped Hill’s left front corner, sending the leader spinning up the track.

Ogle was charged with the caution and sent to the rear, while Hill went pitside for repairs and returned to the track at the tail. They restarted beside each other, and after more close quarter racing, they settled down and eventually finished on the lead lap with Hill in 11th and Ogle 12th.

Notes: The 26-year-old Heckenast gave much credit to his Club 29 Race Car co-designers Darrell Lanigan and Ronnie Stuckey, as well as the horsepower from his Rhyne engine. He was also quick to praise crew chief Axle Wicker. “I’ve been working so much that I haven’t been able to be at the shop since (the) Knoxville (Nationals). My crew chief Axle Wicker has had the car and done everything and he’s done a really good job.” … The race was slowed by five cautions; 14 cars finished on the lead lap. … Riley Hickman, winner of last year’s Deep Fried 75, when the event was sanctioned by the Southern Nationals Bonus Series, won Saturday’s undercard, a UCRA Crate Series victory worth $2,500. Hickman of Ooltewah, Tenn., finished eighth in the main event. … Henry Hanger of Winchester, Tenn., topped a field of 18 Limited Late Models for a $1,500 victory on Friday night. … Billy Moyer Jr., was debuting a brand new Victory Race Car by Billy Moyer. … The Deep Fried 75, which was held in November its first three years, was moved to October this year and closes out Duck River’s season.