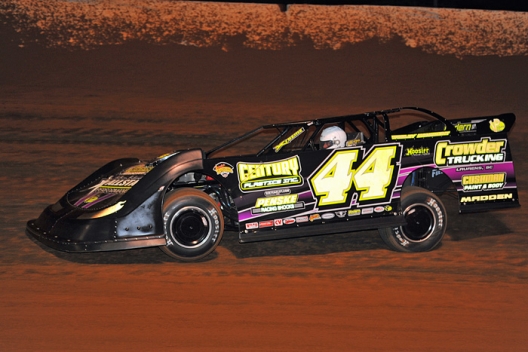 JUNCTION CITY, Ky. (Oct. 10) — Just a month after returning to full-time racing following a nearly four-month absence, Chris Madden of Gray Court, S.C., made his way to victory lane for the third time this season, capturing a $25,000 victory in the Southern Nationals Bonus Series-sanctioned Fall Classic at Ponderosa Speedway.

Charging to the front of the 22-car field at the drop of the green flag, second-starting Madden led the entire 100-lap distance, fighting back challenges from polesitter Scott Bloomquist of Mooresburg, Tenn., to make his way to Ponderosa Speedway’s victory lane in his first ever visit to the Junction City oval.

“We had a great race car tonight,” Madden said after the race. “I want to thank all these guys that work so hard on this thing … they gave me a race car that I couldn’t help but win a race with. This thing was super fast.”

“I was worried we wasn’t going to get the win,” Madden said. “We run about the last 75 laps with the thing blowing fuel in my face. That’s why I couldn’t take off on the starts and (Bloomquist) was able to get up beside me a few times there. But congratulations to Scott for a runner-up run. Any time you can run with that guy, it’s a blessing to me.”

“(Madden) did a good job,” Bloomquist said. “The way the track was tonight, getting the jump on the start  … the outside was the better place to be. We just got in tow there, hoped we might get a break in traffic. But it’s pretty tough to pass a good car out here. Let’s just say we’ve been consistent. Maybe we can pick it up a notch next time.”

After a hard-fought battle with Jason Jameson of Lawrenceburg, Ind., Marlar grabbed the third-place spot on lap 64 and began reeling in the race leaders. A lap-90 yellow ended his charge.

“It hurt me,” Marlar said. “But you don’t know how much Chris (Madden) was driving hard either. I was definitely driving hard and he could have been up there conserving. So it’s hard to say those statements, that you could have or would have. But I’m just glad (promoter) Jerry (Denson) got the race in with the inclement weather we had this week. We tried to put on the best race that we could.”

Notes: The race was slowed by five cautions. ... A yellow flag waved for Ray Cook on lap 10 when he lost a drive shaft. ... Steve Casebolt slowed on the frontstretch to draw a caution on lap 21. ... Another yellow waved on lap 49 when Kent Robinson slowed with a flat right-rear tire. ... Jason Jameson slowed in turns one and two to draw a caution on lap 90. ... The final yellow flew for Justin Rattliff on lap 91. ... Third-place finisher Mike Marlar lowered the track record in Friday's time trials. ... Darrell Lanigan was among drivers in attendance for Thursday's practice session, but scratched from the weekend's action after injuring his thumb.