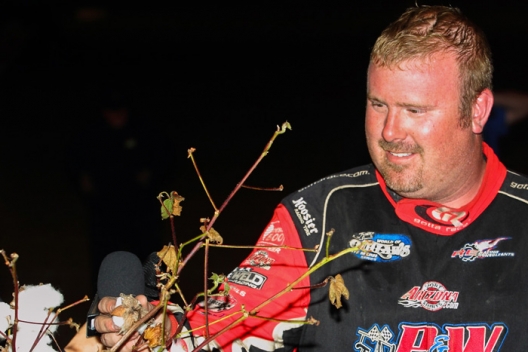 The Dewitt Singleton- and Johnny Stokes-promoted event drew many of the sport’s heavy hitters among its 66 entrants. Red hot youngsters Billy Moyer Jr. and Bobby Pierce, along with surging veterans Don O’Neal, Steve Francis and Dennis Erb Jr., were at the 3/8-mile oval just west of Columbus.

Bagley, whose last victory came 17 months ago in March 2014, was likely an afterthought when the green flag was unfurled.

But 100 laps and $20,000 later, the 29-year-old driver from Longview, Texas, proved would-be handicappers wrong by breaking that lengthy winless streak and collecting his richest career victory. The $20,000 payday doubled Bagley’s previous career best — a $10,000 victory three seasons ago in Tucson, Ariz. — and matched the Lucas Oil-sanctioned Clash at The Mag for Mississippi’s richest dirt race.

Bagley overcame a late-race battle with Erb, of Carpentersville, Ill., and then held off Chickamauga, Ga., native Dale McDowell for the victory. Erb, who wrestled the lead away from Bagley on lap 63 and led 13 laps, finished third, while O’Neal duplicated his fourth-place finish from the June 13 Clash at the Mag. The pole-starting Moyer Jr., of Batesville, Ark., led the first 41 laps before fading to fifth.

Nearly an hour after taking the checkers, Bagley stood behind his team’s hauler, sipping on a beverage and taking short draws from a cigarette. With the oversized winner’s check and a gleaming trophy sitting just a few feet away on the team’s pit cart, Bagley was still a bit overcome, both anxious and happy.

“I could barely talk down there on the front straightaway. I was doing all I could to hold back tears,” he said, adding thanks for car owners Wayman and Kay McMillan.

“We won that $10,000 at Tucson, now three years later here we are without anything big being done. We’ve led some laps, won some smaller (races), but sometimes you wonder, ‘When the hell is it gonna happen again?’ With the few we’ve had slip away, this is good. I told the guys as long as it’s been, when we do win, we’d just go big.”

And that he did.

As Moyer bolted into the lead early, Bagley first turned back repeated challenges from O’Neal, of Martinsville, Ind., for the runner-up spot. The two raced for second as Moyer built big leads, first using the long way around up near the fence, and then down around the hub.

With Moyer still leading by a half straight on lap 30, Erb entered the fray. Moyer encountered heavy traffic on lap 38 as Bagley, O’Neal and Erb closed in. A lap later Erb drove by O’Neal for third.

Meanwhile, Bagley caught the leader and made his move to the point on lap 42 as Moyer Jr., struggled with the backmarkers.

“I think we had a softer right rear than they did,” Moyer said. “Really it was when I got to the lapped cars … that dirty air messed me up. It’s like freakin’ NASCAR. These cars are so air-sensitive.”

Moyer lost another spot when Erb streaked past on lap 43. It then took Erb 20 laps to track down Bagley. Using traffic to his advantage, Erb pulled even with Bagley and took the lead on lap 63. He couldn’t shake the determined Texan, however.

They raced side-by-side for four laps before Erb used the slower car of Jeremy Payne as a pick and finally cleared Bagley. Eight laps later though, Bagley was back. He reclaimed the lead on lap 76 and once he managed to put 12th-running Matt Westfall a lap down on lap 87, Bagley pulled away unchallenged over the final 13 circuits.

“Our car was real good there in the middle,” Erb said. “Once that bottom came in and started getting tight, I got too tight and I wasn’t able to rotate like I needed to. (Bagley) was real good around the tires down there.”

After losing the lead, Erb was unable to hold off the late-race charge of McDowell, who rallied from his 12th-place start to finish second.

“It was fun. He’s a real good racer … experienced,” Bagley said. “That was tight racing. We give each other a lot of respect and never even traded paint. The time I was running behind him, I watched where he was. We got behind him and kinda saw where he was running.

“I took what was working well for me and what he was doing good and kinda put them together. This is a tough racetrack. It’s so slippery and technical. When he got by me, that actually made me better. There were 66 cars here … good cars at this place known as Black Ice. This was a damn good one to get.”