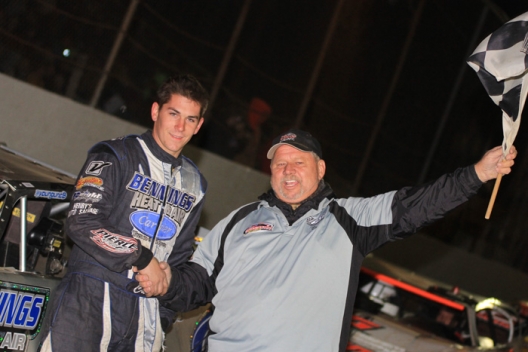 GREENVILLE, Miss. — It didn’t come easy, and it definitely wasn’t pretty, but Timothy Culp emerged victorious in the ninth annual Harlow’s Casino Gumbo Nationals on Saturday at Greenville Speedway for a $10,000 victory in the Mississippi State Championship Challenge Series finale.

The fourth-starting Culp, the West Monroe, La., driver now racing out of Prattsville, Ark., grabbed the lead from Brian Rickman of Columbus, Miss., on a lap-10 restart and never was officially overtaken in the 75-lapper, but the rising young star had to survive a dizzying array of challenges from more than a half-dozen drivers to capture Greenville’s finale for the second straight season.

Culp’s biggest challenge came on lap 40 when Rickman attempted a slide-job in turn one to regain command when contact between the two caused Culp to climb the outside wall. The winner was amazingly able to continue and Rickman was sent to the rear of the field for initiating the contact when a caution flag appeared.

“If you would’ve told me Wednesday we could’ve been in my car and did this, I’d have told you that you were crazy,” Culp said. “We had a pretty good car. I just got to riding there. The worst thing (Brian) Rickman could’ve done was piss me off, because that made me drive that much harder. Once he did that, it was over as far as I was concerned.

“I figured the whole front end was knocked off it .. I don’t know how we were able to get around there. Once we found the rubber (streak), we were all right, but I was still beating the wall down and they were going through the middle a lot better than me. So once I moved down, I knew it was going to be hard to get around me in the rubber. I’m glad it all held together and I can’t believe it.”

Culp, who later survived a three-wide flash under the grandstand with Childress Motorsports teammates Kyle Cummings and Garrett Alberson and then a restart challenge from Josh Putnam, eventually took the checkers over Putnam of Florence, Ala., while MSCCS champion Bub McCool of Vicksburg, Miss., as third. Ray Moore of Haughton, La., and Chad Thrash of Meridian, Miss., rounded out the top five.

“It was a lot of fun,” Culp said. “Once we got the front end knocked off, I could not restart whatever. I couldn’t turn off (turn) four. I don’t know if the front end was toed out so bad, or what. But I was just struggling really bad. I didn’t know whether to choose the bottom. Finally, when (restarts) went single-file, I was like 'Oh, thank you.'  I was glad they finally did that.

“That was a heckuva race. I love coming here. I mean, the fans gotta love racing like that, because it doesn’t get any better than that, sliding every corner and cars back and forth. I know it’s gotta be great for (fans).”

While Putnam fell short of victory, he appreciated the back-and-forth action behind Culp in the race’s late stages.

“We knew there was going to be some sheetmetal (rubbing) and whatnot, but man what a race we had,” Putnam said. “I’ve got one guy that’s kind of sore at me a little bit — I think I got into him a little bit on a slide — but, you know, it was racing. I got it done to me. Hey, around the wall, I’m just happy we had a piece to finish the race.

“We took the lead there and I really thought we had our shot on a restart. We had a caution and called it back, but we just had a blast. Eleventh-to-second, we’re tickled to death with it.”

Bub McCool, who rallied back to third after nearly spinning to cause a lap-32 caution, enjoyed the action, too.

“It was a lot of fun. Everybody was running hard, side-by-side, and you just had to stay on your toes and just pick 'em off when you could and try to stay out of that fence,” said McCool, who wasn’t sure Culp was going to survive his collision with Rickman. “When I seen that happen, I thought he was gone, and he got her back on the ground. He had a good car and he done a good job.”

The polesitting Cummings and Rickman brought the field to the green flag, and after the first start was scrubbed by Ray Moore’s spin, Rickman bolted to the lead with Culp moving to second followed by McCool, Cummings and Eric Cooley.

After Tyler Erb’s flat tire caused a lap-10 spin, Culp capitalized on the double-file restart with a masterful slide job to take the top spot away from Rickman in turn two. The next few laps found Culp extending his advantage with Rickman, McCool, Cummings and Jack Sullivan in pursuit.

Culp edged away again after a lap-19 yellow, but traffic became a factor by the 29th lap and Culp’s struggles in traffic allowed Rickman and McCool to reel in the leader. But when McCool nearly spun in turn one on lap 32, he killed the engine and a caution appeared before he refired the car, sending him to the tail.

A lap 37 caution for Tommy Surrett set up a restart with Rickman turning up the heat on Culp. Entering turn one on the 40th circuit, Rickman tried to slide under Culp, triggering contact between the frontrunners.

Culp’s car was pinched into the outside wall and his right-side wheels rode the top of the concrete wall. Somehow both drivers managed to keep going, but when the caution appeared, Rickman was sent to the rear while Culp, sustaining minimal damage, was restored to the top spot.

Jack Sullivan was promoted to second for the restart at Cummings was penalized for jumping, but Sullivan’s time in the runner-up spot was short-lived as contact with Cummings entering turn three on lap 40 found Sullivan slamming into the outside wall, ending his night. Sullivan displayed his displeasure with Cummings under the caution period before retreating pitside.

When the green flew again, Cummings briefly bolted to the lead with Alberson dropping Culp to third down the backstretch. Culp, however, used an impressive move to narrowly regain the lead at the flagstand.

The next three laps found a three-wide battle for the lead among Culp, Alberson, and Cummings. But Cummings ended up sliding into the infield on lap 44 after contact from Putnam.

The restart found Culp at the point with Alberson, Putnam, Eric Cooley and a rallying McCool occupying the top five. Putnam made his move for the front, but it was erased by a caution.

After that, Culp was able to extend his advantage the rest of the way while the battle behind him featured a flurry of action among the top five with nonstop position-swapping.

In the closing laps Putnam took 2nd for good with McCool, Ray Moore, and Chad Thrash settling into their top five finishing spots. Culp claimed the win by a little less than a second.

Notes: Ray Moore finished fourth after an opening-lap spin put him to the rear. ... Saturday's first B-main was especially wild, with six cars in tight competition for the three transfer spots. Tyler Erb came from 11th to finish second while ninth-starter Robert Baker grabbed the third and final qualifying spot from Kyle Beard off the last corner. ... Culp's victory in the fourth heat came after he was moved up to the pole because original polesitter Billy Moyer Jr. was penalized for jumping the start.