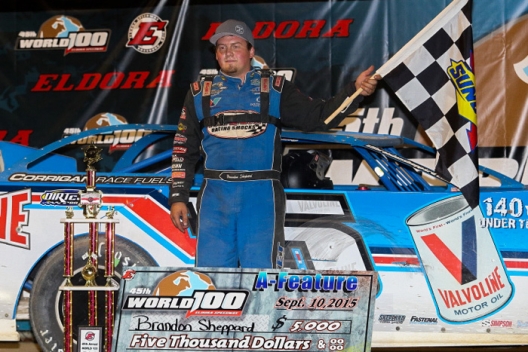 ROSSBURG, Ohio — Not a single caution slowed Thursday’s second preliminary World 100 feature at Eldora Speedway, and with the drivers who were chasing him, winner Brandon Sheppard was glad.

The 22-year-old driver from New Berlin, Ill., has spent much of the season watching the high-flying Jonathan Davenport roll to victories on the Lucas Oil Late Model Dirt Series, so Sheppard did everything he could to stay ahead of the field en route to his 25-lap victory worth $5,000.

Sheppard took the lead from polesitter Jeep Van Wormer of Pinconning, Mich., on the eighth lap, then settled into the high groove to maintain his lead the rest of the way despite battling traffic in the late stages.

“I’ve been watching Davenport this whole Lucas Oil tour,” Sheppard said. “So I knew I needed to get my stuff figured out up there.”

Sheppard figured it out enough to keep Van Wormer in check midway through the race, then build a big enough lead to prevent eventual runner-up Jimmy Owens from getting within striking distance.

Appreciative of his family and supporters in victory lane, Sheppard hopes it’s not the last time he’s on Eldora’s big stage during the sport’s most lucrative weekend.

“It’s a really prestigious place and this race is huge. … this race means a lot, but the one on Saturday is the one we want,” said Sheppard, aiming to become the first World 100 winner from Illinois. “We’re going to give it our best shot.”

Owens slipped by Van Wormer on the 22nd lap to grab the runner-up spot while the Michigan driver settled for a third-place finish. Dennis Erb Jr. of Carpentersville, Ill., wrestled the fourth spot from Davenport in the race’s waning moments, drawing a rebuke from Davenport on the cool-down lap.

Outside front-row starter Brian Shirley ran third early, but he slipped back to a ninth-place finish.

Owens, a two-time World 100 winner looking for his first victory since April, hopes his Thursday performance signals an end to his winless stretch.

“We got a pretty good hot rod right now, and we were just biding our time there, trying to get up through there,” Owens said. “You know, I’m really, really confident. I think we’ve got a good 100-lap race car.

“We would really like to win, we can always use a win to boost up our confidence. But we’ve got a good hot rod right now, and maybe we can put this a Widow Wax car in victory lane on Saturday night.”

Even when Sheppard was held up by slower cars midway through the race, Van Wormer wasn’t able to draw close enough to put pressure on Sheppard.

“These guys are tough here. There was a pretty star-studded field behind us, and you know, we just went out there and gave it our all,” said Van Wormer, who thanked his family and fans in victory lane. “It just feels good to get out there and have a nice run for the night.

“We got a little bit free right there in the center (of the corners), and couldn’t get in the fuel as hard as I think some of those other guys. At that point, we were just pedaling, just holding on.”

Van Wormer jumped into the lead with Sheppard, Shirley, Erb and Owens in pursuit. Sheppard quickly moved up to challenge, trying to slide underneath Van Wormer between turns three and four as the frontrunners made contact.

Van Wormer edged back ahead while sticking with the low groove while Sheppard went to the high side and took command on the eighth lap. By the halfway point, Sheppard was ahead by 2.5 seconds while Van Wormer gave chase just ahead of the Owens-Davenport battle for third.

The slower cars of Steve Casebolt and Garrett Alberson held Sheppard up for several laps, but he maintained at least a one-second advantage and stayed in control in the final laps.

Jonathan Davenport gave full credit to his engine builder for propelling him to victory in the first heat — a race in which he bolted from the fourth starting spot to first on the opening lap and drove away to win by 2.367 seconds over Billy Moyer Jr. “That’s all Lee Roy Rumley horsepower right there,” he proclaimed, praising the performance of his brand-new motor. … Frank Heckenast Jr. scored an impressed victory in Heat 2, but he wasn’t satisfied. “We have to get the car better to run the bottom,” he said, “but some of that (his inability to go low) might have been the tires.” … During his interview after winning Heat 3 Brian Shirley thanked Bob Cullen, the Wisconsin racer who Shirley said helped his Riggs Motorsports team make the trip to the World 100. Shirley drove Cullen’s car in last month’s USA Nationals at Cedar Lake Speedway. … After slipping from his outside pole starting spot to a fourth-place finish in Heat 3, Vic Hill pulled alongside runner-up Jason Feger after the checkered flag to flash some displeasure with something that happened on the racetrack. … Jeep VanWormer got the jump he wanted from the outside pole and rode it victory in the fourth heat. “I just needed to get a good start … just get out there and run my own laps,” he said. … Brandon Sheppard wasn’t satisfied with his Heat 5 triumph. “We got a little bit of work to do,” he said. “There’s always something (more) to be had here.” … Jimmy Owens stuck to the extreme inside of the track to dominate the sixth heat, beating Jason Riggs by 3.455 seconds. He was hopeful that his dominant run was a sign that he might be on the verge of winning his first race since the spring. “Maybe we got our stuff together and can get us a feature win this weekend,” he said.

Using the low side, Doug Drown slipped past Duane Chamberlain to take the lead on the fifth lap. Drown lead the remaining five circuits, with Garrett Alberson finishing second. Chamberlain held on to finish third and transfer to the feature. Josh Rice ran fourth, with Brian Ruhlman rounding out the top five.

Polesitter Steve Casebolt charged to the lead at the drop of the green flag, leading all 10 laps. Chris Simpson edged ahead of Vic Hill to take the runner-up spot, with Shannon Babb advancing through the field to finish third and transfer to the feature. Randy Weaver finished fourth, with Hill running fifth.

With the heat winners lining up inverted by qualifying time, Jeep Van Wormer of Pinconning, Mich., is on the pole of the 25-lapper with Brian Shirley alongside. On the second row will be Brandon Sheppard and Jimmy Owens with Frank Heckenast Jr. and Jonathan Davenport in the third row.

Third-starting Jimmy Owens dominated all eight laps to win the sixth heat. Jason Riggs held on to his second starting spot, with Bobby Pierce edging ahead of Garrett Alberson in a close battle for the third-place spot. Alberson finished fourth, with Mack McCarter grabbing the fifth-place spot.

Second-starting Chub Frank edged ahead of Brandon Sheppard to the lead the opening lap, with Sheppard charging to the front of the field on the next circuit. Sheppard picked up the heat race win, with Jimmy Mars advancing from the fourth starting spot to finish second. Frank finished third to take the final transfer spot, with Josh Rice finishing fourth. Doug Drown rounded out the top five.

Polesitter Brian Shirley jumped to the lead at the drop of the green flag, with outside front row starter Vic Hill shuffling back to fourth. Shirley led all eight laps to pick up a heat race win, with third-starting Gregg Satterlee grabbing the runner-up spot. Jason Feger edged ahead of Vic Hill to take the third and final transfer spot. Hill finished fourth, with Brian Rickman running fifth.

Charging around the high side, outside polesitter Frank Heckenast Jr. led all eight laps to win the second heat. Polesitter Dennis Erb Jr. grabbed the runner-up spot, with Jared Landers improving one spot to finish third and transfer to the feature. Randy Weaver finished fourth, with Chris Simpson rounding out the top five.

Fourth-starting Jonathan Davenport charged to the front of the field in turns one and two on the opening lap, dominating to win the first heat. Billy Moyer Jr. advanced one spot to finish second, with polesitter Morgan Bagley slipping to finish third with the final transfer spot. Tagging the wall in the early running, Steve Casebolt finished fourth, with Mike Spatola rounding out the top five.

Dream winner Jonathan Davenport of Blairsville, Ga., and his K&L Rumley team were one of the last arrivals to the track. “We stayed up all night working on this thing,” Davenport said. “We finally cranked the (new Lee Roy Rumley-built) motor at 7 this morning. We barely made it here in time to get through tech.” … The St. Henry Nite Club machine steered by Duane Chamberlain of Richmond, Ind., has a gold-dominated scheme with a picture of late Eldora founder Earl Baltes on its hood. … Another Richmond, Ind., driver, Steve Casebolt, has an Ohio State University football wrap on his Tye Twarog-owned car. … Former World 100 winner Steve Francis of Ashland, Ky., is celebrating his 48th birthday. … With finishes of sixth in 2013 and ninth in ’14, Terry Phillips of Springfield, Mo., is one of just two drivers with a top-10 finish in each of the last two World 100s. The other is four-time winner Scott Bloomquist of Mooresburg, Tenn. (third in ’13, first in ’14). … Randy Weaver of Crossville, Tenn., sustained a broke axle during hot laps, forcing his Chip Stone-owned team to scramble to make repairs for time trials. … Dustin Nobbe of Batesville, Ind., limped into the pits during hot laps with a flat right-rear tire and other damage to the right-rear corner of his car. The mechanical engineering student at Purdue University arrived at Eldora after attending classes earlier in the day. … Jackie Boggs of Grayson, Ky., didn’t record a qualifying lap. His car’s engine began to pop as he sat in the staging area, prompting him to shut it down immediately. … Morgan Bagley of Tyler, Texas, and Brian Rickman of Columbus, Miss., crunched the right-rear corner of their cars when they got into the outside wall during time trials. … Josh Rice of Verona, Ky., is driving a Club 29 Race Car the Kuzman racing purchased from Tye Twarog, Steve Casebolt’s car owner.

Jared Landers of Batesville, Ark., was the fast qualifier for the second feature in the opening night of the 45th annual World 100. He tripped the clock with a time of 16.681. Josh Richards of Shinnston, W.Va., was the night’s overall fast qualifier.

Three drivers apiece from each of consolation race will fill out each 24-car starting field. The first three rows of each feature event will line up heat winners inverted by qualifying time.