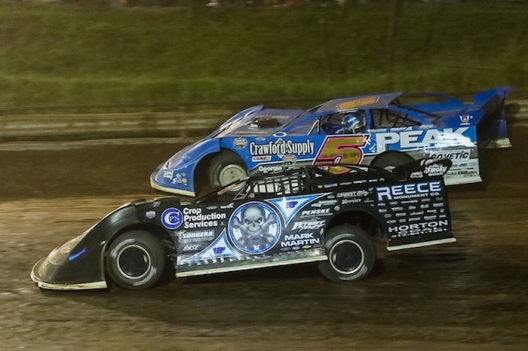 Regaining the lead when Don O’Neal of Martinsville, Ind., tagged the turn-four wall on lap 79, Bloomquist led the final circuits to earn a $25,000 payday in the series richest one-day event. Notching his second career Hillbilly 100 victory, Bloomquist became the race’s fourth different winner in as many events at I-77.

“I knew we were good,” Bloomquist said in victory lane. “We just hung with him (O’Neal). The car was real maneuverable. I felt like if we could get back by him, we’d be OK. But it’s really tough to pass lapped traffic here, so I wasn’t real happy after that start. But everything turned out good.”

Charging to the front of the field at the drop of the green flag, Bloomquist fell to O’Neal on a lap-39 restart. The 2010 Hillbilly 100 winner was challenging the O’Neal for the lead when the defending Lucas Oil Series champion brushed the wall with less than 25 laps remaining in the 100-lapper.

“I didn’t know if he got in it or not, we were getting in position,” Bloomquist said. “I’d actually moved up in three and four and run even higher than he was through the center of the corner and was getting a run at him and felt like I was going to be able to get him even if he hadn’t done that.”

O’Neal edged ahead of Jonathan Davenport of Blairsville, Ga., and Devin Moran of Dresden, Ohio, in a tight battle for the runner-up spot. Davenport held on to finish third, with 10th-starting Steve Francis of Ashland, Ky., grabbing the fourth-place spot. Moran rounded out the top-five.

“We tried,” O’Neal said after the race. “Scott (Bloomquist) was good all night. We just happened to get him on that restart there and I thought maybe if we got out front we could stay there. I just wasn’t’ quite good enough in lapped traffic to get around them pretty quick and that really hurt us.”

But after a 2015 season of ups and downs, the second-place run was a strong close to the weekend for O’Neal, who posted top-five finishes in series events at Attica Raceway Park and Portsmouth Raceway Park.

“What a turnaround,” O’Neal said. “It started at Pittsburgh last week, had a good run. And then had three solid runs all weekend here. So I’m really proud of all the team. All the guys worked hard and they’re the ones turning it around.”

Davenport, improved from his sixth starting spot to finish third after a close battle for the podium position.

“We was about everywhere on the racetrack, we was going back and forth,” Davenport said. “Fell back and would come back, fell back, so we salvaged a pretty good run. This here ain’t my cup of tea. It’s a cool racetrack, but this slow stuff sucks. I can’t wait to get to Eldora next week.”