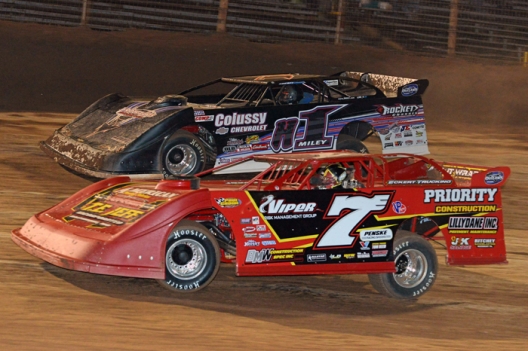 Earning every cent of his $30,150 pay in a race postponed by rain on June 27, the 49-year-old star outdueled fellow Pennsylvanian Jared Miley of South Park to grab the lead on lap 64 and fought off a late-race challenge from Shane Clanton of Zebulon, Ga., to register his second World of Outlaws Late Model Series triumph since debuting a new P&J Contracting-sponsored Longhorn Race Car three weeks earlier.

Eckert steered his Paul Crowl-owned mount under the checkered 1.158 seconds ahead of Clanton, the WoO points leader who was shooting for a sweep of the 4/10-mile oval’s weekend after winning the national tour’s Working Man 50 on Friday night. Clanton, 39, marched forward from the seventh starting spot in his Capital Race Car but was unable to overtake Eckert to duplicate his 2010 Firecracker 100 by GottaRace.com victory.

Miley, 29, settled for a career-best Firecracker 100 finish of third after leading laps 1-63 in his Rocket Chassis machine. Fourth place was claimed by Chase Junghans of Manhattan, Kan., who recorded his third consecutive top-five finish in a 100-lap WoO event, and fifth place went to 2013 Firecracker winner Josh Richards of Shinnston, W.Va., who started 17th.

The triumphant run secured Eckert a place in Firecracker 100 history that he admitted thinking about prior to the race’s green flag.

“Me and Jared, when we were walking up there to get in our cars (after driver introductions), I said, ‘OK man, let’s try to keep this money in Pennsylvania,’” said the polesitting Eckert, who shared the front row for the start of the feature with Miley. “He said, ‘OK, let’s do this.’

“We didn’t have any kind of a plan, but we were hoping one of us could win it and keep it in Pennsylvania — and we did. It’s an honor.”

Eckert found a formidable foe in Miley, a former Lernerville track champion who vaulted into the lead from the outside pole at the race’s initial green flag. Miley kept Eckert at bay through six caution flags in the first 31 laps and was still in command as the A-Main passed its midway point.

While Eckert eventually managed to sneak by Miley on the inside to assume command on lap 64, it took all of his talent and savvy to pull it off.

“Jared Miley did a heck of a job … that kid did a heck of a job,” said Eckert, who recorded his third overall WoO win of 2015 and the 33rd of his career. “I was putting all the pressure I could on him and I couldn’t get by him. At one point I thought, I’m gonna drive by him here, and he picked the tempo up and drove off again — I’m like, he shifted (gears). I don’t know what happened.

“I saw him start getting loose, though, and we were able to get by him.”

But then Eckert had to deal with Clanton, who could sniff a signature victory for a spectacular season that saw him hit the 10-win mark on the WoO the previous night. Clanton grabbed second from Miley on lap 74 and five circuits later began bidding for the lead underneath Eckert.

“I knew I was in trouble there when he showed himself and I looked at the scoreboard and it was still (20)-some laps to go,” Eckert said. “I’m like, Dammit, I’ve got to pick this pace up.”

Eckert figured out how to stay ahead of Clanton, bearing down in lapped traffic and pulling out to a consistent 1-second lead over the final 10 circuits.

“I was just so snug that I had to just keep maneuvering around,” Eckert said. “I’d go three-wheel brake for a couple laps, and then I’d go back to four-wheel brake. I kept changing everything I could change in the car, but I was having a hard time at the end there getting exited (off the corners) and I knew Shane must’ve been getting a big run on me somewhere because he drove beside me down the frontstraightaway that one time.

“Man, I was just trying to fend him off, and it all worked out. He’s won enough races this year so he didn’t need to win another one.”

Clanton briefly thought he had Eckert’s number, but the ever-changing Lernerville track surface shifted at the wrong time for the driver who’s searching for his first-ever WoO championship.

“The line changed three or four times,” said Clanton, who earned $15,050. “I found that bottom and passed Jared and caught up to Eckert, but somebody else behind me just got to running the bottom and just threw me crumbs up so I couldn’t get the traction down the straightaway that I needed.”

Miley, meanwhile, didn’t sulk after his bid for an upset victory fell short.

“We were really good there early on the cushion and it kind of died a little bit,” Miley said. “Then I had to get down in the middle of the track where Rick and Shane are really good. They’re used to this kind of racing more than us, but to run third to them guys means a lot. I learned a lot during the race.

Finishing in positions 6-10 was Tim McCreadie of Watertown, N.Y., who ran as high as fourth; Gregg Satterlee of Indiana, Pa., who rallied after his involvement in a lap-30 tangle forced him to make a pit stop; Morgan Bagley of Tyler, Texas; Eric Wells of Hazard, Ky.; and Frank Heckenast Jr. of Frankfort, Ill.

Defending Firecracker 100 champion Darrell Lanigan of Union, Ky., passed Eckert for second place early in the distance and stalked Miley for the first third of the race, but his night ended when a broken transmission forced him to slow on a lap-30 restart. His disabled car caused a chain-reaction pileup in turn two that included Satterlee, Heckenast and Jordan Yaggy of Rochester, Minn.

Notes: Eckert’s best finish in eight previous Firecracker 100 feature starts was a third in 2011. His only other top-10 run was a ninth in 2009. … Miley’s third-place finish was by far the best Firecracker performance by a local Lernerville driver, besting his own eighth-place finish in 2012. … Davey Johnson of Greensburg, Pa., ran as high as fourth early in the feature before sliding backward and ultimately retiring on lap 67. … Lanigan appeared to win the second heat by a mere 0.001 of a second over Junghans, but officials found that Lanigan's transponder was positioned one foot too far forward on his car so the victory was given to Junghans. ... No time trials were contested to start the program because the heat lineups were determined using drivers’ best finishes from the preliminary shows run on June 25-26. … Provisional starters were Yaggy and Lawler (WoO) and Alex Ferree of Saxonburg, Pa., and Schaltenbrand. … Ferree had to fall back on a provisional after he slid over the turn-two bank on the first lap of the second heat, forcing the race’s fifth start to the rear of the field. Schaltenbrand, meanwhile, broke a motor at the beginning of the night and returned to his shop just down the street from the track to retrieve a backup so he could start the feature. … Kenny Pettyjohn of Millsboro, Del., earned $3,000 for capturing the Uncle Sam 30 Non-Qualifiers’ Race. … The WoO LMS concludes its three-race holiday weekend in Pennsylvania on Sunday night (Sept. 6) with an $8,000-to-win event at Selinsgrove Speedway.