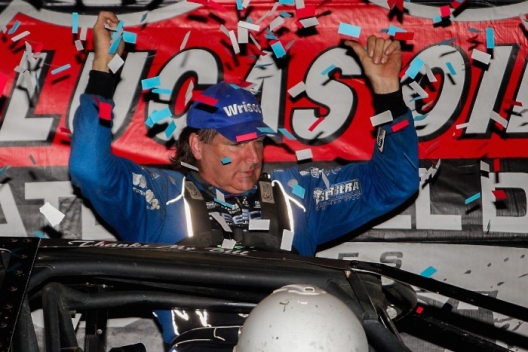 Bloomquist, who again cut into Jonathan Davenport’s points lead, posted his first four-race winning streak on the national tour since 2011 by leading all the way in the Labor Day weekend special.

While Bloomquist stayed comfortably ahead tight racing behind, Jimmy Owens of Newport, Tenn., finished second in the 50-lapper with Davenport rallying from his 17th starting spot to finish third. Don O’Neal of Martinsville, Ind., scored his third straight top-five finish on the series by finishing fourth while his Clint Bowyer Racing teammate Steve Francis of Ashland, Ky., rounded out the top five.

Devin Moran of Dresden, Ohio, and Dennis Erb Jr. of Carpentersville, Ill., were drivers who ran among the top five, but both retired on the 31st lap, Moran after spinning off the frontstretch and into the infield.

Bloomquist, meanwhile, didn’t let anyone seriously contend in a victory that moved him within 120 points of Davenport as he continued to make up ground in the quest for his third series title and first since 2010.

"The car was just superb all night long,” Bloomquist said. “We are back in the points chase and I hope we don't get any more rainouts so we can settle it on the racetrack! If the track is anything like this for the ($100,000-to-win) Dirt Track World Championship next month, then the fans will be in for quite a show.

"I don't really know what they've done differently with the race track, but it was different from when we were here in July. We could all run anywhere on it. Our car handled so well tonight. We replaced the (steering) rack last night and we just tried to stay out front for the whole race. I didn't abuse the tires too much. It was just a perfect night, and it's hard to do that anymore with the type of competition there is in this series.”

Bloomquist notched his series-leading 60th career Lucas Oil Series vicotry and sixth of the season. Five of them have come in the last seven races following Davenport’s hot streak that included a stretch of five victories in a row and seven in nine series starts.

Owens survived a spectacular battle for second among several drivers throughout the race.

"We were all mixing it up. The fans had to enjoy that race for second. None of us had anything for Scott. Congrats to him and his team on the win,” Owens said. “I want to thank Bryan Rowland for giving me this opportunity. Everybody on the Widow Wax team is working hard and we keep getting close to taking this car to victory lane.”

To qualify for the main event, Davenport had to run his first consolation races of the season. He rallied from the ninth row to a podium finish at a track where an early accident knocked him out of the July race.

"To come out of here finishing third with the way the night started, we will take it,” Davenport said. “The car was really good, but to start 17th against these guys is really tough. We learned a lot tonight, so when we come back here next month we will have some good notes.”

Notes: Eight caution flags slowed the feature. … Eddie Carrier Jr. of Salt Rock, W.Va., started outside the front row but had a horrible first lap, losing ground in turns two and four before settling in mid-pack. He ralllied to finish sixth. … Thirteen of 24 starters completed 50 laps. … The tour returns to Portsmouth on Oct. 16-17 for the Carl Short-promoted DTWC and the events first $100,000 payday.