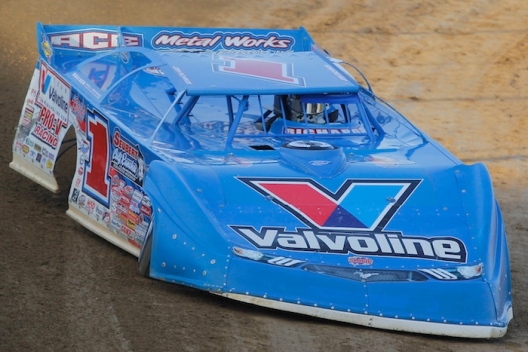 The three-time WoO champion left no doubt as to who was the dominant car at Atomic's two-race event in driving his Valvoline Rocket Chassis house car to a lead of more than eight seconds in Saturday's caution-free race. Richards, 27, earned $10,150 for his eighth WoO victory of the season and his fourth in the national tour's past five events.

"This car was a dream to drive," said Richards, who will attempt to add another victory to his impressive weekend when the WoO heads for Eriez Speedway in Erie, Pa., on Sunday. "I love coming here to this awesome track. To drive all over it and move around like that, it was a lot of fun."

Richards crossed the finish line 8.471 seconds ahead of WoO points leader Shane Clanton of Zebulon, Ga., while Jared Hawkins of Fairmont, W.Va., settled for third after challenging Richards through the race's early portions. Devin Moran of Dresden, Ohio, was fourth with R.J. Conley of Wheelersburg, Ohio, rounding out the top five.

Although he fell short of the victory, Clanton continued to march toward his first-career WoO title with his fifth consecutive top-five finish and his third straight run among the top three. His lead over Richards at the top of the WoO standings sits at 158 points with eight races remaining on the season.

"It took me so long to get by a couple guys there and lapped traffic was pretty tough with the cushion as big as it was in one and two," Clanton said. "I didn't wanna take no chances. We needed to finish where we were and come home second. Josh has been on a roll. Our Capital Race Car is pretty good right now, just needs to be a little better."

After starting alongside Richards on the front row, Hawkins was the only driver to provide Richards a serious challenge. Hawkins’s Rocket machine kept pace with his good buddy Richards through the early laps with Hawkins even taking a few looks under Richards when the leaders reached lapped traffic around lap 10.

But Hawkins couldn't maintain Richards’s pace and faded late. He settled for third in completing a solid weekend.

"I was surprised I was keeping up with him because I was really pushing it," Hawkins said of his attempt to keep pace with Richards early in the race. "I'm sure I burnt my stuff up there. Those last 20 laps were a handful.

"I'm glad we came home with a top three and I'm real happy with the weekend. It's a lot of fun racing these guys. To be able to come out and be competitive with them makes it even better."

Jason Montgomery of Jackson, Ohio, was sixth in the final rundown after slipping backward from third on lap 14, with Eric Wells of Hazard, Ky., taking seventh. Chub Frank of Bear Lake, Pa., was eighth with Chris Ferguson of Mount Holly, N.C., and Chase Junghans of Manhattan, Kan., rounding out the race's top 10 finishers.

Notes: Richards shared the front row for the start of the feature with his good buddy Hawkins, who was the best man at Richards's wedding. ... The victory was Richards's eighth of 2015 on the WoO tour, moving him within one checkered flag of catching Clanton for the series lead in the category. It also marked his second sweep of a two-race WoO weekend at a single track, matching his perfect Memorial Day weekend performance at West Virginia's Tyler County Speedway. .. WoO rookie Jordan Yaggy of Rochester, Minn., was involved in a turn-three tangle on an opening-lap restart in the second B-Main and his car rolled onto its side. He wasn't injured and took the green flag in the feature using a provisional. ... Jackie Boggs of Grayson, Ky., was the lone driver to time in the 13-second bracket with his fast lap in Group 2 of qualifying. He earned $500 from Tim Hattle Trucking for his fast-time honors. ... Wells and Hawkins tied for fast time in Group 1 at 14.088 seconds, with the nod going to Wells. ... The national tour made its first trip to Ohio in two years and first stop Atomic since 2009, when the track was known as K-C Raceway.