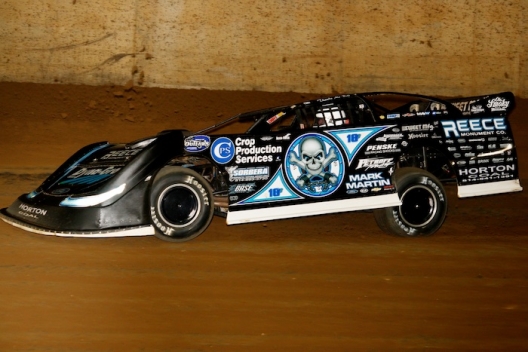 Starting outside the front row, Bloomquist overtook polesitter Steve Francis of Ashland, Ky., on lap 17 of 50, leading the remaining distance to earn a $10,000 payday in his third Lucas Oil Series triumph of the 2015 season.

“We’ve been pretty good lately,” Bloomquist said in victory lane. “We’ve worked hard and tested a little bit and just trying to find where we’ve been missing it. For a while you start looking in the mirror, you start thinking, ‘I need to just get up on the wheel a little harder.’ We definitely didn’t leave anything on the table out there tonight...we’ve just begun to fight.”

Bloomquist battled Francis in the early running, charging to the front of the field just shy of the race’s halfway point and holding back late-race challenges from Jonathan Davenport of Blairsville, Ga., for his first career Whiskey City 50 victory.

“I knew when we could get down below him (Francis) and run through the middle early when the cushion was quite a bit more dominant that we were pretty good and ended up being able to rely on that later in the race,” Bloomquist said. “Even though we had to get up on top there and hustle it pretty hard in one and two, we could still run the middle in three and four. The car was really good tonight.”

Advancing from the fourth starting spot, Davenport finished runner-up, with Jimmy Owens of Newport, Tenn., rallying from the ninth starting position to notch a podium finish. Eddie Carrier Jr. of Salt Rock, W.Va., ran fourth, with Dennis Erb Jr. charging from the 18th starting spot to round out the top five.

“We was pretty good there,” Davenport said. “We missed it just a little bit really, being the first time here with Kevin (Rumley) and second time overall. Scott (Bloomquist) was good tonight. They’ve been working hard. Like he said usually about me, he had to use that cushion tonight to stay ahead of us. We was a little bit better through the middle than he was I think, but it’s just part of it. We’ll go on to the next one.”

After fighting bad luck in his last two Lucas Oil Series starts, Owens was pleased to end the night with a top-three finish.

“We had a pretty good hotrod tonight,” Owens said. “I wish we would have got to start a little further up front there. But we set ourselves back quite a bit qualifying and wasn’t all that good in the heat race. My guys made some good adjustments to the car and we had a pretty good hotrod for the feature. I felt really maneuverable, could run high, low, in the middle. But it just took me too long.”

Notes: Bloomquist tops the Lucas Oil Series all-time win list with 57 career victories. He has three on the 2015 season. ... The first yellow flag waved on lap 11 when Justin Rattliff slowed in turns three and four. … Dustin Linville and Don O’Neal tangled in turn two to draw a caution on lap 14; Linville retired, O’Neal continued. … Another yellow waved on lap 19 when second-running Steve Francis slowed with a flat tire. … Josh Rice slowed to draw a caution on lap 22. … Another yellow flag waved for Chris Brown on lap 40. ... Duane Chamberlain piloted the Gary Engle-owned No. 15.