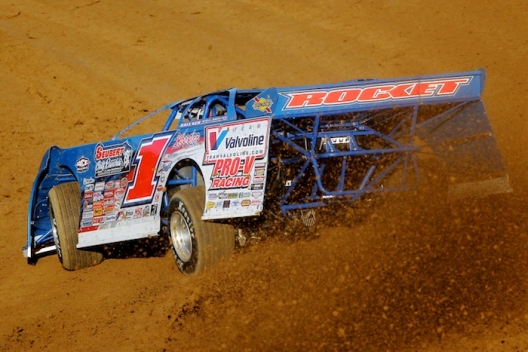 Richards, the three-time series champion from Shinnston, W.Va., overtook race-long leader Darrell Lanigan of Union, Ky., on lap 26 of Friday's 40-lap race at the 3/8-mile oval and drove his Valvoline-sponsored Rocket Chassis house car to his third victory in the past four events.

The $8,650 triumph marked Richards' seventh WoO LMS win of the season and the 56th of his career. Even more significantly, the victory was Richards' first at Atomic Speedway.

"This is an awesome racetrack," Richards said of the historic Buckeye State race facility formerly known as K-C Raceway. "I love coming here, but this is one that's always eluded me. I actually won my first big check here 10 years ago, but it was just a dash. It feels good to finally win one here."

The first half of the race featured a battle between a pair of three-time WoO LMS champions in Richards and Lanigan. The polesitting Lanigan led the way through the race's caution-plagued opening laps, as the third-starting Richards made an early move to take second from Jackie Boggs of Grayson, Ky.

Richards chased Lanigan through the first half of the race before turning up the pressure just after the midway point. Lanigan's bobble exiting turn two on lap 26 gave Richards the opening he needed. He took advantage, using a slide job to complete the winning pass in turns three and four.

"He was good out in clean air by himself, but after we'd run some laps I could gain on him," Richards said of his battle with Lanigan. "He slipped up, and I knew I had to take it while I could because he doesn't mess up very often."

Lanigan wasn't able to make a serious bid to retake the lead after losing it to Richards. He faded in the following laps, dropping back to fourth before slowing on lap 32 and retiring from the race.

Advancing from the seventh starting spot in his Optima Batteries Rocket, Carrier used a lap-35 restart to take second from Clanton. But the Lucas Oil Late Model Dirt Series regular wasn't able to keep pace with Richards through the closing laps. He settled for the runner-up finish in just missing what would've been his first career WoO victory.

"I think we had a third place car, and then got a good run on Shane that last restart," Carrier said. "I think he kind of hit a hole and pushed a little bit and I got him. I was probably holding him up, but I'll take second."

Clanton drove his Weldbank Energy Capital Race Cars house car to another solid finish in recording his 21st finish of the third or better on this year's WoO LMS campaign. The series veteran holds a 162-point lead over Richards as he chases his first series championship.

"We had a good car tonight, just made the wrong adjustment for the feature and we bounced through the holes a little too much," Clanton said. "Eddie got by me there, but overall, a good finish."

Rick Eckert of York, Pa., recovered from problems that forced him to slow and cause a lap-three caution to finish sixth, while the night's fast qualifier Chris Ferguson of Mount Holly, N.C., finished seventh after running as high as fourth midway through the race. Chase Junghans of Manhattan, Kan., rallied from 24th to finish eighth with Morgan Bagley of Longview, Texas, and Mason Zeigler of Chalk Hill, Pa., round out the top 10.

The race was slowed by eight cautions, including a number of yellow flags that involved frontrunners. Second-starting Boggs slowed and retired from the race on lap 12, while Matt Westfall of Ludlow, Ohio, slowed from a top-10 spot on lap 19. Lanigan's slowing machine on lap 32 was hit by 10th-running Duane Chamberlain of Richmond, Ind. The final caution waved for a tangle resulting from a top-10 battle between Devin Moran of Dresden, Ohio and Steve Casebolt of Richmond, Ind.

Series competitors return to Atomic on Saturday for another complete program highlighted by a 50-lap, $10,000-to-win main event. The series moves to Eriez Speedway in Hammett, Pa., on Sunday, where it will wrap up its three-race weekend with another $10,000-to-win program.