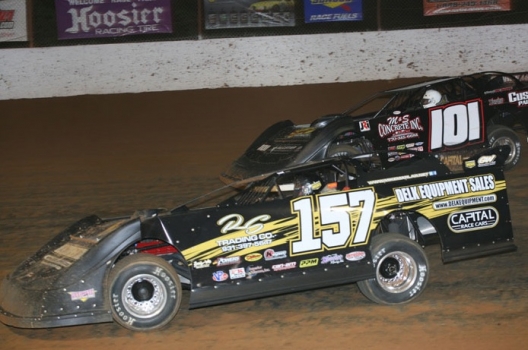 “It took all 75 laps, that’s for sure,” Marlar said in victory lane. “We qualified well and just really didn’t get our car good for the heat. That goes to show how critical all this is … get a little off and them guys drive by you. But just an awesome race.”

Making his way into the top five by the race’s halfway point, Marlar charged past second-running Jared Landers of Batesville, Ark., on lap 44. Navigating heavy lapped traffic, Marlar slipped past Bloomquist, stretching his lead over the field until a yellow flag waved with five laps remaining in the12th annual event.

“A lot of these guys I race with, I’ve raced with a long time,” Marlar said. “I got to credit some of these guys like Michael Chilton and Victor (Lee) and some of them guys. I just had a good car tonight. I was squeezing in some tight spots and saying, ‘Hey Michael, it’s me, let me go here.’ So it all worked out. Them guys give me room when I needed it. A lot of getting through that traffic is them guys holding a good line.”

“We really don’t know this track that well and we went too soft on tires it seemed like,” Bloomquist said after the race. “We fired up good and took off good, but it slowed down on us. The tires are torn up pretty bad … looks like he might have had something a little harder than we did. But we’ll be back. We felt like we were pretty dominant, we just lost our tires.”

After dropping back in the early running, Linville, a Ponderosa Speedway regular, worked his way back to the front of the field to finish third.

“It was getting pretty interesting before that caution come out,” Linville said. “I was wishing that caution hadn’t come out. But Mikey’s been on a roll, congrats to them guys. And Bloomer, anytime you get to run with Bloomquist like that, it’s a pretty cool deal.”

Notes: Marlar recorded his first win since debuting a new Capital Race Car a few weeks ago. ... Friday's victory makes Marlar's second of the 2015 season; he captured Ricmond (Ky.) Raceway's Paul "Butterball" Wooldridge Memorial back in July. ... The first yellow flag waved on lap 17 when Skylar Marlar of Winfield, Tenn., slowed in turn one.  …  Casey Roberts of Toccoa, Ga., drew a caution when he slowed in turn one with a flat right-rear tire. … The final yellow flag flew on lap 70 when Riley Hickman of Ooltewah, Tenn., and Dustin Mitchell of Pine Level, N.C., tangled in turn four.