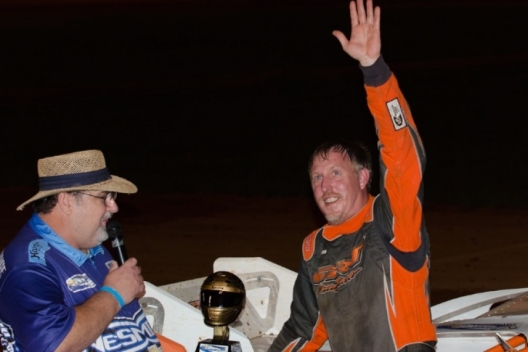 Bruce Carroll
Tim Busha waves to the crowd after his 411 Motor Speedway victory.
What won the race: Tim Busha of Boaz, Ala., led the final six laps Saturday at 411 Motor Speedway for his third career Chevy Series victory. Race-long leader John Ownbey's race ended when he went up in steam on lap 45 and Busha's tight battle with runner-up Cory Hedgecock ended up being pivotal in the $3,000-to-win event.
Quotable: “I hate what happened to Ownbey because Cory and I didn’t have anything for him tonight, but a win is a win, and we’ll take them anyway we can get them,” Busha said. “Cory and I had our own little battle going on for second on the restarts. We both tried the inside and outside. Sometimes the outside would work one time, and the next time it wouldn’t. Then we would take turns trying the inside, with the same results.”
Key notes: Busha's previous series victories came in the tour's first season in 2013 at Whynot Motorsports Park and Talladega Short Track. ... Ownbey, won the previous night's series event at I-75 Raceway in Sweetwater, Tenn., suffered an apparent puncture in the radiator following a lap-30 tangle with the slowing car of Lavon Sparks.. ... A dozen starters finished 50 laps in a race slowed by seven cautions. ... Barry Goodman tagged the wall in hot laps, ending his night prematurely. ... The series is primarily for Late Models utilizing CT 525 engines. ... The night was originally scheduled for a tour race at Duck River Raceway Park in Wheel, Tenn., but that was cancelled.
On the move: Series points leader Ronnie Johnson of Chattanooga, Tenn., started 12th and finished third, making a bold last-lap crossover move to overtake Jake Knowles for a podium finish. ... Fuel pump issues plagued 21st-starting Pierce McCarter of Gatlinburg, Tenn., early in the night, but he rallied forward in the feature to finish sixth.
Winner's sponsors: Busha piloted a Kilpatrick Racing GRT Race Cars.
Points chase: Through Aug. 15, Johnson has 718 points to lead Tyler Crowder (704), Busha (674) and Adam Martin (670).
Car count: 21
Fast qualifier: John Ownbey
Time: 13.806 seconds
Next series race: September 25, East Alabama Motor Speedway (Phenix City, AL) $2,000
Editor's note: Results and race details are unofficial.