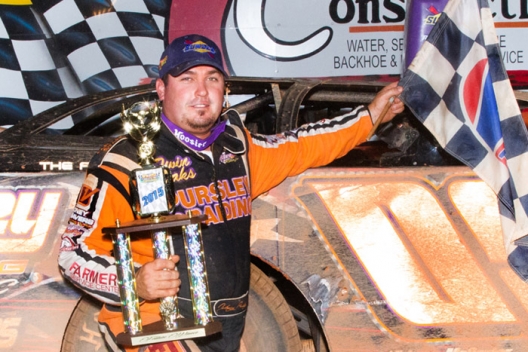 Glen Starek
Johnny Pursley enjoys his first touring victory since 2013.
What won the race: Johnny Pursley of Clover, S.C., outdueled former series champions Dennis Franklin and Casey Roberts in Ultimate Super Late Model Series action at Travelers Rest Speedway. Winning a race with five official lead changes among the three drivers, Pursley earned $4,000 in the Whitey Whitesides Memorial, his first-ever series victory.
Quotable: "We really needed this win. We didn’t win a Super (Late Model) race last year and we have been working hard to finally get one. Our new Barry Wright car has been good everywhere we have raced but we haven’t had things fall our way. Tonight it finally did. That was a lot of fun to race with Rambo (Franklin) and Casey like that. Those guys aren’t going to give you anything but they are going to race you clean. Thanks to everyone who helps us get to the track every week, we couldn’t do it without their help,” Pursley said after his first career Ultimate win.
Key notes: Pursley notched his first touring victory since Oct. 19, 2013, in Carolina Clash action at Fayetteville (N.C.) Motor Speedway. ... Roberts jumped out to the early lead. ... Dustin Mitchell, who debuted a new Longhorn Chassis, got turned around on the eighth lap. ... Pursley led lap 13 before Roberts edged back ahead on lap 14. ... Franklin edged Pursley out front by .002 seconds on lap 15. ... Pursley grabbed the lead for good on lap 19, fighting off Franklin, who had a pass for the lead negated by a lap-22 caution for Jordy Nipper. ... The Georgia-based series made its first visit to Travelers Rest as the track hosted its first open-competition engine event since 2009.
On the move: Brent Dixon of Elberton, Ga., started 11th and finished sixth.
Winner's sponsors: Pursley's No. 09 is sponsored by Twin Oaks Racing, Eagle Manufacturing, Pursley Grading and White Horse Limited.
Points chase: Entering the event, Roberts had 451 points to lead Franklin (412).
Car count: 18
Fast qualifier: Casey Roberts
Time: 15.225 seconds
Polesitter: Johnny Pursley
Next series race: August 21, Ponderosa Speedway (Junction City, KY) $15,012
Editor's note: Results and race details are unofficial.