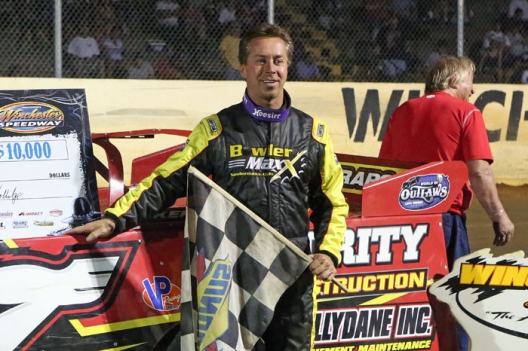 In his third night out in his new Longhorn mount, Eckert, 49, of York, Pa., led every lap of Saturday's Gunter's Honey 50 to earn $10,650 for his second World of Outlaws Late Model Series victory of the season.

The 2011 WoO champion grabbed the lead from the outside pole on the start of the 50-lap race and never looked back. His Paul Crowl-owned No. 7E machine crossed the finish line 2.246 seconds ahead of WoO points leader Shane Clanton of Zebulon, Ga., in a race that was slowed by just one caution.

"This feels really good," said Eckert, who counts Winchester as one of his home tracks after frequenting the 3/8-mile oval throughout the early years of his career. "Usually when you come home you run worse. It's great to win in front of fans we don't get to race in front of much anymore. That's really cool."

After starting the weekend with finishes of eighth at Delaware International Speedway on Thursday and second at Potomac Speedway on Friday, Eckert wrapped up the WoO three-race Mid-Atlantic trip with a dominating performance on Saturday.

Eckert drove around Eric Wells of Hazard, Ky., to win the first heat race and later drew the outside pole in the redraw among heat winners and runners-up. Aside for two instances in traffic, the feature was hardly ever in doubt as Eckert raced to the 32nd WoO victory of his career and his first at Winchester.

"We've struggled some and we've run good some, but we felt we needed to make a change," Eckert said of his decision to switch to the Longhorn machine. "I hope it's the right direction. We've been comfortable the last two nights in it.

"Hopefully we've learned enough about it that it'll make us better going on from here. But that's next week and this is now. This is cool."

Clanton, who saw Josh Richards of Shinnston, W.Va., cut 20 points out of his WoO points lead with back-to-back victories at Delaware and Potomac, stymied the tide with his runner-up effort in his Weldbank Energy Capital Race Cars house car. While he fell short of the victory, Clanton notched his 26th top-five finish in 32 WoO A-Mains this season.

"Hats off to Eckert," said Clanton, who stretched his points lead to 168 points over ninth-finishing Richards. "His car was just a little bit better leaving the corner than mine was. We've got a little bit more homework to do, but overall we're happy.”

In scoring the best WoO finish of his career, Moreland rebounded from his disappointing outing Friday night at Potomac. The standout regional racer more than made up for failing to make Friday's A-Main beginning with his heat race victory over Richards.

Moreland, 26, drew the pole for the main event, but he couldn't capitalize as a mistake in the first corner allowed both Eckert and Clanton to pull ahead of him. He settled in from there and pressured Clanton for second through much of race before taking third at the checkereds.

"Going from zero last night to running top five tonight, what else can you ask for," said Moreland, who piloted a Denison Landscaping-sponsored Rocket Chassis in the event. "This is the best Outlaw finish we've ever had. It feels pretty good.

"We knew we had a good car for tonight. All we had to do was do one thing at a time. Time trial good then stay in the front in the heat and get a good pill draw. It was up to me from there to make the right moves on the start on the race, which I didn't do. I feel like I might've gave that away there, but the car was good."

Kenny Pettyjohn of Millsboro, Del., was sixth at the finish with Gregg Satterlee of Indiana, Pa., seventh. Jason Covert of York Haven, Pa., was eighth with Richards and Chase Junghans of Manhattan, Kan., rounding out the top 10.

The race's only caution waved when Tim McCreadie of Watertown, N.Y., spun on the third lap.

Heckenast, the 2014 WoO Rookie of the Year who entered Saturday seventh in WoO LMS standings, was absent from the event due to family obligations. He received 60 hardship points toward his driver points total, while Lanigan's fifth-place finish earned Heckenast Racing full points toward the team's ownership points tally.

The WoO tour has another three-race weekend on tap next week with two races at Atomic Speedway in Chillicothe, Ohio, Friday and Saturday and a visit to Eriez Speedway in Erie, Pa., on Sunday.

Notes: Eckert's previous WoO win this season came on May 8 at Ponderosa Speedway in Junction City, Ky. ... The 3/8-mile oval turned one lane, making passing so difficult that there were no changes in the top 10 running order after some brief position-swapping following the lap-three restart. ... Smoke wafted from the rearend of Josh Richards's car for the second half of the third heat, but he held on to make the redraw with a runner-up finish. He started fifth in the feature but slipped high in turns one and two on the lap-three restart and lost several positions that he was never able to recover.