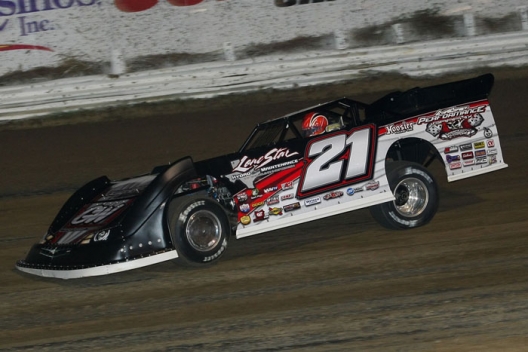 Landers and Brown joined Friday’s other heat race winners in a redraw to lineup the first three rows of Saturday’s 100-lap feature. Landers, the 2010 Topless 100 winner, drew the pole for the $40,000-to-win crown jewel event.

Dale McDowell of Chickamauga, Ga., led every lap of the second heat race and will start outside the third row in Saturday’s 100-lapper. Garrett Alberson of Las Cruces, New Mexico, winner of Friday’s sixth and final heat race, will line up sixth.

The top three cars from each of Friday’s heat races transferred to the main event. Saturday’s program will include consolation races to set the remainder of the field.

Polesitter Garrett Alberson edged Jesse Stovall at the start to lead the first lap. Third-starting Don O’Neal began closing in on the race leader in the early running, but was unable to seriously challenge for the lead. Alberson picked up a win in the sixth and final heat, with O’Neal finishing second. Stovall held on to grab the third and final transfer spot.

Polesitter Billy Moyer Jr. charged to the front of the field, as Allen Tippen spun in turns one and two to draw a caution on the opening lap. Second-starting Jared Landers edged Moyer to lead lap-one as the race took the green flag. A yellow flag flew on the 11th lap when Timothy Culp slowed down the backstretch. Landers led all 15 laps to win the fifth heat, with Scott Bloomquist of Mooresburg, Tenn., slipping past Moyer to finish second. Moyer finished third to transfer to the feature.

Polesitter Terry Phillips jumped to an early lead, with third-starting Jimmy Owens reeling in the race leader. Using the bottom line, Owens charged past Phillips to lead the eighth lap, dominating the remaining distance to win the fourth heat. Phillips held on to the runner-up spot, with fourth-starting Brandon Sheppard finishing third to transfer to the feature.

A yellow flag waved on the opening lap when David Payne spun coming out of turn two. Shannon Scott was taken pit side under caution. Polesitter Chris Brown charged to a dominating lead as the race went green. Dwight Falcon drew a second caution on lap nine when he jumped the turn-four berm, leaving the racing surface. Another yellow waved on lap 11 as third-running Robbie Stuart slowed with a flat tire. Simultaneously, Falcon and Payne tangled on the frontstretch. Brown led the remaining circuits to win the third heat, with fifth-starting Eddie Carrier Jr. improving three spots to finish runner-up. Hunter Rasdon grabbed the third and final transfer spot.

Polesitter Dale McDowell jumped to a commanding lead, with a yellow flag waving on the 12th lap as Robby Moore slowed on the backstretch. McDowell led the remaining distance, with third-starting Mike Marlar grabbing the second-place spot on the restart. Wendell Wallace finished third to transfer to the feature.

Second-starting Earl Pearson Jr. charged to the front of the field on the opening lap to take an early lead. A yellow flag waved on the ninth lap when Brandon Smith slowed in turn two. Despite contact with a lapped car, Pearson led all 15 laps to win the first heat race. Jonathan Davenport finished runner-up, with fourth-starting Shannon Babb improving one position to grab the third and final transfer spot.

Friday’s preliminary action will include time trials and heat races that will set a portion of the field for Saturday’s main event. With 57 cars on hand, qualifying will be split into two groups, with six 15-lap heat races to follow. The fastest qualifier will be inverted to the third-place starting spot in each heat.

Saturday’s program will include consolation races and the 100-lap feature event.

There were 53 cars on hand for Thursday’s practice. … Saturday’s main event boasts a purse of more than $130,000. … Besides Late Models, Friday’s program includes a full modified show. … Jimmy Owens of Newport, Tenn., was the winner of last year’s event. He has two career Topless 100 victories. … Jonathan Davenport of Blairsville, Ga., enters the event atop the Lucas Oil Series points standings. He has a series-leading 10 victories on the 2015 season, including last weekend’s North-South 100. … Hometown driver Billy Moyer is among the weekend’s entrants. The four-time Topless 100 winner recently notched his 800th career victory. … Fellow Batesville natives Jared Landers and Wendell Wallace join Moyer in the pit area. Landers was the winner of the 2010 Topless 100, while Wallace made his way to victory lane in 1998. … The Comp Cams Super Dirt Series is co-sanctioning the event; Jack Sullivan of Greenbriar, Ark., tops that tour’s points standings.