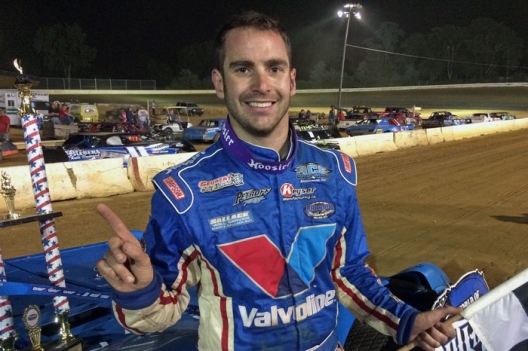 Kevin Kovac/DirtonDirt.com
Josh Richards in victory lane after his second consecutive World of Outlaws win.
What won the race: Josh Richards of Shinnston, W.Va., surged past Morgan Bagley of Tyler, Texas, for the lead on lap two and never looked back Friday night at Potomac Speedway, capturing the Gunter's Honey 50 for his second consecutive World of Outlaws Late Model Series victory. He turned back a brief mid-race challenge from Rick Eckert of York, Pa., to build a full straightaway edge before battling lapped cars ahead of him in the final circuits shrunk his final winning margin over Eckert to 0.879 of a second.
Quotable: “I was kind of messing around with my brake bias front-to-rear and got off rhythm,” Richards said of being surprised by Eckert’s strong inside bid for the lead off turn four on lap 15. “The track had moisture in it at the top early, but then it was like a light-switch went off and I was kind of halfway up in the middle and I just needed to be right down at the bottom. I saw him there (on the inside), but we were able to stay ahead of him and get down to the bottom and then the next restart I got rolling again and back into rhythm.”
On the move: Kyle Hardy of Stephens City, Va., charged from the 20th starting spot to a third-place finish.
Winner's sponsors: The Rocket Chassis house car has an Andy Durham Racing Engine is sponsored by Ace Metal Works, Hoosier, Seubert Calf Ranches, Sunoco Race Fuels and Valvoline.
Points chase: Heading to Potomac, Shane Clanton of Zebulon, Ga., had 4,224 points to lead Josh Richards (4,060) and Chub Frank (3,990).
Car count: 32
Fast qualifier: Josh Richards
Time: 14.730 seconds
Polesitter: Rick Eckert
Heat race winners: Morgan Bagley, Austin Hubbard, Josh Richards, Shane Clanton
Consolation race winners: Stevie Long, Kyle Lear
Provisional starters: Tim McCreadie, Brandon Overton
Next series race: August 15, Winchester Speedway (Winchester, VA) $10,000
Editor's note: Results and race details are unofficial.
By Joshua Joiner
WoO Late Model Series

BUDDS CREEK, Md. (Aug. 14) — Josh Richards is making the most of the World of Outlaws Late Model Series’s visit to the Mid-Atlantic region.

Richards, the three-time WoO champion from Shinnston, W.Va., raced to his second victory in as many nights Friday evening at Potomac Speedway, leading all but the opening lap of the Gunter's Honey 50 to earn $10,700 in the second leg of the national tour's three-race Mid-Atlantic weekend.

Starting from the sixth position, Richards, 27, survived contact in an opening-lap scramble before charging ahead of outside polesitter Morgan Bagley of Tyler, Texas, to take the lead on lap two. After holding off a mid-race challenge from York, Pa.’s Rick Eckert, Richards pulled away for much of the second half of the race before again turning Eckert back amid traffic during the final five circuits.

Richards crossed the finish line with an advantage of 0.879 seconds in earning his sixth WoO victory of the season and the 55th of his career.

"I love racing in this region. I missed dearly getting to race around here," said Richards, who raced at Potomac for the first time in a number of years after missing last year's WoO return to the 3/8-mile track while sitting out the season due to medical issues.

"I thought the (opening-lap contact) might've got a tire or something," Richards added. "Luckily it was just cosmetic. We were able to get rolling and get the lead early. I had to be really patient in lapped traffic — just try to slow myself down and try to ride it out."

Eckert settled for second after starting from the pole. He was followed closely by Kyle Hardy of Stephens City, Va., who charged from the 20th starting spot to score the best WoO finish of his career. Eighth-starting Austin Hubbard of Seaford, Del., was fourth, while WoO points leader Shane Clanton of Zebulon, Ga., finished where he started in the fifth spot.

Richards, who won the first round of the three-race WoO trip during Thursday's Fulton Bank 50 at Delaware International Speedway in Delmar, Del., drove his Valvoline-sponsored Rocket Chassis house car to his 17th top-five finish in 31 WoO races on the season. His back-to-back triumphs come after a disappointing stretch of racing that saw Richards scored just one victory in 12 WoO races between June and July.

"The guys have worked really hard lately," Richards said. "They haven't given up and it's showed. It feels good to win again."

In just his second outing in a new Longhorn Chassis for Paul Crowl Racing, Eckert was solid all night at Potomac. He was in prime position to pick up his second WoO victory of the season after drawing the pole in the redraw among heat winners and runners-up, but Richards outdueled him in the race's opening laps.

"He out-drove us there at the beginning," Eckert said of Richards' charge to the front. "He got up on the wheel and got on the top. I was too neutral at the beginning to do that. I did get a roll on him a couple times in the middle of the race, but I didn't need them cautions.

"I think our cars were pretty equal, to be honest. He just out drove me those first couple of laps."

While the front of the field may have been mostly settled after Richards made his early charge the lead, there was plenty of excitement back in the pack for much of the distance.

Hardy was a large part of that action with his charge through the field. He drove his Viper Motorsports MasterSbilt by Huey machine into the top five by lap 15 and used a three-wide pass to climb to third on a lap-23 restart. But his charge stalled out there, and he settled for third at the finish.

"We didn't expect to pass that many cars in the feature," said Hardy, who finished second in a B-Main to make Friday's main event lineup. "We were pretty frustrated after the heat race and the B-Main. We really weren't looking for that, but we got rolling on the top there on them restarts.

"The car was good. It didn't everything I wanted it to. I wanted to pass two more, but that was all we could get."

The race was slowed by seven cautions. The first occurred on the initial attempt to start the race when fourth-starting Jordan Yaggy of Rochester, Minn., spun off turn two and was hit by both Richards and Briggs. All three cars were able to continue racing with Yaggy dropping to the tail of the field for the complete restart.

The race went right back to yellow conditions on the lap-12 restart when Chub Frank of Bear Lake, Pa., slowed with power-steering issues, while Bagley saw a top-three run turn south when he slowed with a flat tire and brought out a lap-22 caution and Gregg Satterlee of Indiana, Pa., came to a stop at the top of turn one to necessitate the final caution on lap 23.

Notes: Richards scored his first-ever win at Potomac. ... A broke right-rear axle knocked Tim McCreadie out of action on lap two of the fourth heat. Later, in a B-Main, he spun after absorbing a hit from Danny Snyder, forcing him to pull out his second car for the feature. He was an early retiree from the headliner. ... Dale Hollidge's night came to an early end due to engine problems during hot laps.