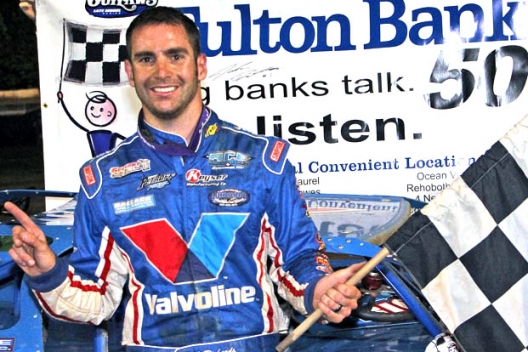 Richards, the three-time WoO champion from Shinnston, W.Va., pressured Seaford, Del.’s Hubbard through the second half of the 50-lap race before taking command when Hubbard's overheating engine expired on lap 45. Richards led the final six laps and crossed the finish line with an advantage of 7.756 seconds over runner-up Chub Frank of Bear Lake, Pa., in scoring his second career victory at Delaware's half-mile oval.

"This year's been up and down, so we'll definitely take it," said Richards, whose victory came in the opening round of a WoO Mid-Atlantic three-race weekend. "I feel bad for Austin. He did a great job out there. I saw him smoking a few laps before, so I was trying to get in a spot in case he broke something. I figured it was a matter of time, but I feel like we had the best car tonight."

The fourth-starting Richards drove his Valvoline-sponsored Rocket Chassis house car to the 54th WoO victory of his career. He was followed at the finish by the polesitting Frank, who led early in the race in his Longhorn Chassis before being overtaken by both Hubbard and Richards.

Tim McCreadie of Watertown, N.Y., advanced from the eighth starting spot in his Sweeteners Plus Rocket to finish third while second-starting Boom Briggs of Bear Lake, Pa., took fourth in his Longhorn. WoO points leader Shane Clanton of Zebulon, Ga., rallied from the 14th starting spot to round out the top five in his Capital Race Cars house car, taking the checkered flag hot on Briggs’s rear bumper.

Richards ran third through the race's early laps while Frank and Hubbard mixed it up at the front. The two leaders swapped the top spot on laps two and three before Hubbard finally pulled ahead of Frank on lap eight. Richards also passed Frank on a lap-13 restart.

Hubbard enjoyed a comfortable lead until the race's halfway point when traffic became a factor and Richards began to apply pressure. The race's final caution waved on lap 30, giving the two leaders clear track for a final 20-lap green-flag run. Hubbard initially edged away from Richards, but Richards closed the gap by lap 37 and made multiple bids for the lead before Hubbard's MasterSbilt by Huey machine slowed on lap 45.

"We'll take it," said Richards, whose five WoO victories this season ranks second only to Clanton's nine wins. "The guys have worked really, really hard. I feel like we should have more wins than we do."

Hubbard, a former WoO regular who now follows a more regional schedule, was looking to turn around his misfortune-plagued 2015 season with what would've been the fourth WoO victory of his career. But the 2010 WoO Rookie of the Year was denied a turnaround triumph when his ailing engine let go just over five laps from the finish.

"We were pretty much a ticking time bomb," said Hubbard, whose most recent WoO victory came at Potomac Speedway in Budds Creek, Md., during last year's Mid-Atlantic weekend. "As long as it was going, I was going. It finally gave up and that was the end of it.

Looking to end his nearly six-year WoO winless streak, Frank led early before slowing his pace in an attempt to save his own overheating engine. While he settled into the third spot around the halfway point, the close racing between Richards and Hubbard ahead of him made Frank believe things might fall his way.

"I won a race here once when Josh crashed, and it was Austin he was lapping," Frank recalled of a 2007 WoO event he won at Delaware. "It was like déjà vu. I was thinking you never know what's gonna happen.

"We were running hot tonight. We were wide-open and the thing was like 240 (degrees) right off the bat. I was trying to baby it and trying to make it because we're point racing with Josh. It ended up getting really hot, but it held the water so I don't think it hurt anything."

Kenny Pettyjohn of Millsboro, Del., advanced from the 12th starting spot to finish sixth, just ahead of hometown driver Ricky Elliott, who started and finished seventh but ran as high as fourth. Rick Eckert of York, Pa., finished eighth in a new Longhorn Chassis he debuted at Thursday's race. Frank Heckenast Jr. of Frankfort, Ill., was ninth with Eric Wells of Hazard, Ky., rounding out the top 10.

The race's first caution appeared on the opening lap when a tangle back in the pack left Mark Pettyjohn of Milton, Del., spun on the back straightaway. The second yellow flag waved on lap three when Staci Warrington, also of Milton, slowed. Nick Davis of Millsboro, Del., slowed for a lap-13 caution, and Donald Lingo Jr. of Millsboro slowed on lap 29. The final caution appeared a lap later after Amanda Whaley, another Millsboro driver, spun in turn four.

WoO LMS rookie competitor Jordan Yaggy of Rochester, Minn., was absent from Thursday's event due to problems with his team's hauler. He received 60 WoO LMS hardship points and plans to join the series for the remainder of the weekend.

Notes: Clanton logged only one qualifying lap because of a crank-trigger problem, but he fixed the malady for his heat race. … Virginian Kyle Hardy failed to qualify behind the wheel of a brand-new Viper Motorsports MasterSbilt by Huey machine that was originally earmarked for Eckert's use. ... Mark Pettyjohn lost his car's engine during heat action, but he started the feature in Delaware International regular Andrew Mullins's car because he received a provisional for being the fastest qualifier who didn't transfer to the feature. ... The race was originally scheduled for May 28 but was pushed back to be opener of a three-race Mid-Atlantic weekend for the World of Outlaws Late Model Series, which visits Potomac Speedway in Budds Creek, Md., on Friday and Winchester (Va.) Speedway on Saturday.