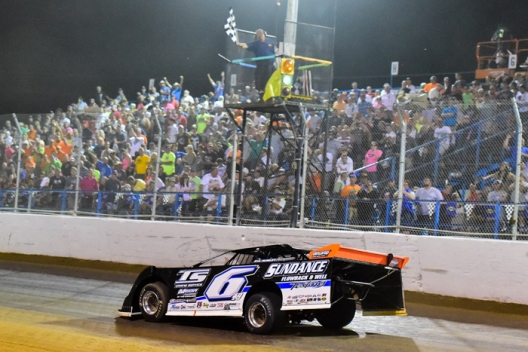 Inheriting the lead on lap 16 when a tangle with a lapped car sent race leader Jimmy Owens of Newport, Tenn., spinning in turn two, the Blairsville, Ga., driver dominated the remaining distance for a $50,000 payday, adding yet another crown jewel to his resume.

Starting outside the front row, Davenport charged to the lead on the opening lap, falling back to third as Owens and fifth-starting Jason Jameson of Lawrenceburg, Ind., swapped the first-place spot in the early running. With Owens rejoining the tail of the field after drawing a lap-16 caution, Davenport cruised to victory, notching his series-leading 10th Lucas Oil Late Model Dirt Series triumph of the season.

“We took off and Jimmy (Owens) and (Jason) Jameson passed us there and I was just kind of riding, waiting for the fuel load to burn off there because I was afraid I was hurting the right-rear tire too much,” Davenport said. “I felt like I was pretty good there, I was just moving around the track.

“Them two (Owens and Jameson) was mixing it up, they was going at it. I could hear them in front of me, they was getting after it. I just tried to sit there kind of patient and just ride for a little bit. And man, I hate that for Jimmy (Owens) … that’s a bad deal.“

“We was coming there with like two or three to go and got racing with those lapped cars,” Davenport said. “I got in (turn) one a little hot, hit that hole and got sideways. I thought I heard his (Bloomquist) motor under me and I’m like, ‘Oh no.’ I tried to squeeze down a little bit because I was racing with Randy (Weaver) there and I went ahead and tried to clear him the next corner where I could get my momentum back up for the last lap.”

As the 100-lapper drew to a close, Bloomquist began reeling in the race leader, but his late-race challenge wasn’t enough to score a third career North-South 100 victory.

"Everybody’s behind right now,” Bloomquist said of Davenport’s hot streak. “You can see it. They just have gotten farther ahead. Whatever it is, we’ve all been on this side of the fence. I don’t know if I’ve ever seen anybody quite as dominant right now as what he’s been … it’s pretty significant. I feel like I drove a great race, did everything I could, and just come up a little bit short. We’ve got some work to do and we’re going to get the tools to do it.”

Stringing together another strong run since debuting a new Capital Race Car at Cedar Lake Speedway’s USA Nationals, Marlar was pleased with his podium finish.

“I had my moments and I would get to pushing a little bit," Marlar said. "These cars are just so hard to race with air. Out on an open track, yeah, I could close in pretty good. But when I’d get to them, it’s like you hit that wall, you just can’t get past it. But we had a real good car, no doubt.”

Notes: Davenport notched his 10th Lucas Oil Late Model Dirt Series victory of the season, the 14th of his career. … The 100-lapper saw three different race leaders. … The race was slowed by four cautions. … A yellow flag waved on lap 16 when Jimmy Owens spun in turn two after a tangle with a lapped car, collecting Josh Rice. … Tim McCreadie drew a caution on lap 31. … A yellow flew for John Gill on lap 61 when he slowed on the racetrack. … The final caution fell on lap 70 for debris on the racing surface.

11:22 p.m. (61 laps): John Gill draws a caution as he slows on the racetrack. Davenport leads Bloomquist, Marlar, Landers and McDowell.

11:17 p.m. (50 laps): At the haflway mark, Bloomquist is reeling in Davenport for the lead. Marlar runs third, Landers, Jameson.

11:05 p.m. (17 laps): Bloomquist has advanced from the 10th starting spot to run second, with 12th-starting Mike Marlar moving to fifth.

10:17 p.m.: Feature cars roll on to the frontstretch for driver introductions.

Promoter Carl Short announced during intermission that this year’s $100,000-to-win Dirt Track World Championship at Portsmouth (Ohio) Raceway Park will feature a passing points format. … Suffering driveline issues, Tim McCreadie of Watertown, N.Y., scratched from the night’s first dash. He’ll start 15th in the 100-lapper. … Brandon Sheppard of New Berlin, Ill. and Dennis Erb Jr. of Carpentersville, Ill., will use series provisionals to make the feature lineup. … Robby Hensley of Walton, Ky., currently leads the Florence weekly points standings and will receive a track provisional to start the $50,000-to-win event. … Rookie Late Model driver Josh Rice of Verona, Ky., is among drivers making the North-South 100 starting lineup for the first time. His strategy, “We’re going to try to save it a little at first. Just kind of let everybody get spaced out, try and find a line, save the tires for the end. Just try to bring it home in one piece. … Winning the evening’s first dash, Jared Landers of Batesville, Ark., will start on the pole of the main event. Watching track prep take place, Landers admitted that starting first was a bit nerve-racking, “You’ve got to stay up there. Everybody’s looking at you and you’ve got to win this race. This is our chance to capitalize on another big one.” … Transferring through a consolation, two-time North-South 100 winner John Gill of Mitchell, Ind., cracked the starting lineup for the first time since 2007. He has 18 career North-South 100 starts.

Second-starting Jonathan Davenport led all six laps to win the second dash and start outside the front row of the main event. Steve Francis finished second, with Chris Ferguson advancing one spot to finish third.

Advancing to the second-starting spot as Tim McCreadie scratched from the dash, Jared Landers charged to the lead at the drop of the green flag. Landers led all six laps to win the first dash and will start on the pole of the feature. Polesitter Jimmy Owens slipped one spot to finish second, with Jason Jameson holding on to his third-place starting spot.

Polesttier Chris Brown jumped to an early lead, with Austin Mills spinning in turn four to draw a caution on the second lap. Another yellow flag waved on the ensuing restart when Matt Westfall hit the backstretch wall. Zak Blackwood spun in turn two to draw a caution on lap five. A fourth yellow fell on the ensuing restart when Duane Chamberlain and Chad Stapleton tangled in turn four in close a battle for the runner-up spot with Scott James. His displeasure with James apparent, Stapleton climbed from his car and heaved his steering wheel at the driver of the No. 83. Chamberlain and James were able to continue from the tail of the field, with Stapleton retiring to the pits. Brown cruised over the field to win the final consolation, with John Gill edging Greg Johnson for the second and final transfer spot.

A yellow flag flew on the opening lap when Bobby Pierce spun in turn four, collecting Ethan Burgess and Mason Combs. As the race took the green flag, outside front row starter Dustin Linville charged to a commanding lead. Robby Hensley spun in turn four to draw a caution on the 10th lap. Challenging Chris Simpson for the runner-up spot, Michael Chilton jumped the cushion to hit the turn-two wall, as Ted Nobbe simultaneously hit the turn-four wall to draw a lap-14 caution. Linville picked up the win, with Simpson finishing second to transfer to the 100-lapper.

Seconding-starting Earl Pearson Jr. jumped to an early lead, with third-starting Kent Robinson challenging polesitter Randy Weaver for the runner-up spot. Working the bottom of the racetrack, Weaver began reeling in the race leader, taking the lead just past the halfway point. A yellow flag waved for R.J. Conley on lap 11 when he spin in turn four. Dustin Nobbe drew a second caution when he spun in turn two on lap 15. Weaver picked up the win, with Pearson holding off Robinson to grab the second and final transfer spot.

Action is set to get under way Saturday evening at Florence for the conclusion of the 33rd annual North-South 100, with the night’s races set up by the double round of heat race preliminaries contested Friday night.

Three-time North-South 100 winner Jimmy Owens of Newport, Tenn., and home-state driver Steve Francis of Ashland will start on the pole of a pair of dashes that will set the lineup for the first eight rows of the $50,000-to-win main event.

Owen’s dash will set the inside lane of the feature, while Francis’s dash will set the outside lane. Three 20-lap consolation races, with the top two cars transferring from each race, will determine the remainder of the field, along with series and track provisionals.

Along with Saturday’s dashes, consolations and 100-lapper, a $2,5000-to-win non-qualifiers' race is part of Saturday’s schedule. … Besides Late Models, Saturday’s racing action will also include a modified feature. … The 2015 National Dirt Late Model Hall of Fame induction ceremony was held Saturday afternoon. … Drivers Skip Arp of Georgetown, Tenn., and Davey Johnson of Greensburg, Pa., were among the Hall of Fame class. Arp is competing this weekend at Florence, with Johnson planning to return to Lucas Oil Series action at the Pittsburgher 100 in a couple of weeks. … Eddie Carrier Jr. of Salt Rock, W.Va., received the Sportsman Award. … Don’t miss details about the rest of the National Dirt Late Model Hall of Fame inductees. ... Switching engines following last night's preliminaries, Dennis Erb Jr. of Carpentersville, Ill., will race his main car again this evening. He was forced to go to a backup car following troubles in Friday's first heat. ... After experiencing engine problems in Friday's heat race action, James Rice of Verona, Ky., has scratched from Saturday's program.