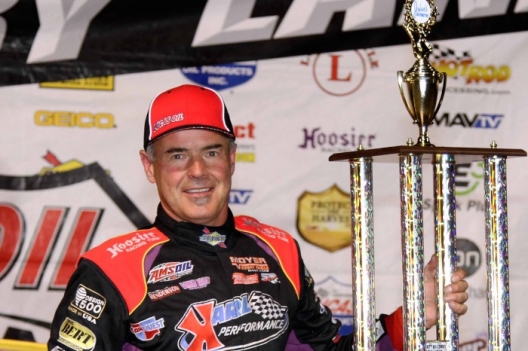 WEST LIBERTY, Iowa (Aug. 4) — A big victory at a big track put Billy Moyer on the cusp of a big milestone.

Hall of Fame driver Billy Moyer of Batesville, Ark., an Iowa native racing just a few hours away from where his career started in the 1970s, led all 40 laps from the pole at West Liberty Raceway for his 799th overall career victory.

"I feel like we've had a real good combination on some short tracks, but I haven't run on a lot of these big tracks with it,” Moyer said of his new Victory Race Car in victory lane. "We threw some stuff at it and it worked. I'm just not real familiar with the car yet, but I couldn't have been happier with it.”

The 57-year-old driver’s 40th career MLRA victory and sixth overall of 2015 left him reminiscing about a career that ranks among the winningest of all time in Dirt Late Model history.

"I never believed we'd win that many races,” Moyer said. "Starting out a little kid here in Des Moines, starting out in an old '71 Camaro. It's good to be back around the family there in Des Moines, and my uncle there getting hooked up with him, and building these cars just puts some enjoyment back in it again.”

Seventh-starting Mike Marlar took a run at Moyer but settled for second while Chris Simpson of Oxford, Iowa, started and finished third in a race slowed by a single caution for Jason Utter on the 23rd lap.

Second-starting Tim McCreadie of Watertown, N.Y., held the runner-up spot for the first half of the race, but slipped back to fourth (where he finished) following the race’s lone restart. Gregg Satterlee of Indiana, Pa., rounded out the top five.

Lapped traffic was the only thing to slow Moyer's blistering pace, as contact with the slower car of Joel Callahan set up a stretch where McCreadie and Simpson took a shot at Moyer early amid slower cars.

Shortly after the midrace restart, Marlar worked his way into the second spot and put some pressure on the winner, but couldn’t find a way past.

"I just needed him to mess up and guys knocking on 800 wins don't mess up much,” Marlar said. “We had a good run. We was probably pretty close on speed. We just couldn't get around him. I love coming out to Iowa here because man, you've got some really fast racetracks, and it's pretty cool to get to go that fast and everybody race that good.”

Simpson, who fell out of Monday’s race at Farley Speedway with overheating problems, posted a solid third-place finish.

"I just got a little tight in and the motor started running a little hot,” Simpson said. “On these lap cars you have to take advantage right away. I kind of slowed up, and Mikey dove on me there and got by me. Overall its a good night.”

Notes: Moyer’s career victory total had been undercounted until Dirt Late Model historian Bob Markos discovered four more from the 1979 season that weren’t already on the ledger. Moyer’s next victory will be No. 800. … Eleven drivers were running at the finish. … Jason Feger broke on the final lap while running seventh. ... Chad Simpson and Jake O'Neil scratched from action after showing smoke in hot laps. ... Jeremy Payne's night ended early in a heat race. ... MLRA competitors made their debut at West Liberty's half-mile. ... Jesse Stovall of Billings, Mo., won Monday's $10,000 event at Farley; he was an early retiree Tuesday. ... Both Farley and West Liberty operate under the Simmons Promotions umbrella, which has had a busy stretch including three fair races at Dubuque (Iowa) Speedway. ... All three tracks run weekly IMCA-sanctioned Late Models.