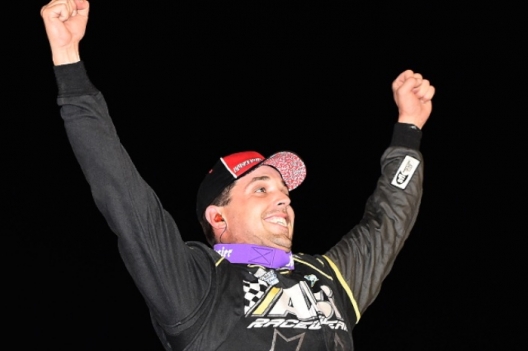 FARLEY, Iowa — The Lucas Oil Midwest LateModel Racing Association made its first appearance at Farley Speedway, but the winner was plenty familiar.

Jesse Stovall of Billings, Mo., notched his series-leading fifth victory in the Monday Mayhem main event, leading all 50 laps to match his career-high $10,000 payday at the 3/8-mile oval hosting the Missouri-based series for the first time.

“Absolutely (these tracks) up here have got some good black dirt,” Stovall said. “I don’t know why it fits me well, but it does, and you know it’s a really fun place to race.”

The polesitting Stovall repeatedly edged away from the field after restarts and was never seriously challenged, taking the checkers 1.6 seconds ahead of reigning series champ Chad Simpson of Mount Vernon, Iowa, who started sixth and took the second spot from series points leader Terry Phillips of Springfield, Mo., after a lap-27 caution.

Phillips settled for third while outside front-row starter Jason Feger of Bloomington, Ill., was fourth. Tim McCreadie of Watertown, N.Y., making a rare series start after a stretch of Midwest racing on the World of Outlaws Late Model Series, rallied from his 15th starting spot to finish fifth.

Stovall was glad to get back on track after a rare off-weekend in World of Outlaws Late Model Series action at Cedar Lake Speedway in New Richmond, Wis.

“I struggled last weekend … this gets my morale back up,” Stovall said. “I get my dog in the dirt awful easy, so this definitely brings our game back up there.”

Although he missed the first few MLRA races of the season, he’s also within striking distance of Phillips in the championship chase.

“I knew when I got close to him he’d turn the heat up,” Stovall said of his friend and fellow racer. “He’s a veteran, he’s a very good racer, and he’s done it a lot of years. It’s going to be very, very tough to get anything done with him points wise.

“So we’ll just keep trying to win races and having fun, and at the end of the year, I just hope we can finish off strong no matter win or lose the points chase.”

Three cautions slowed Farley's 50-lap feature, none for serious incidents. Ray Guss Jr. of Milan, Ill., got into the turn-two wall on the fifth lap for the first yellow.

On the 16th lap, the yellow flew again when R.C. Whitwell of Tucson, Ariz., slowed while running among the top 10 and retired to the infield (Chris Simpson ended his top-five run during the caution period, heading pitside).

Mike Marlar Winfield, Tenn., got caught up in the berm on the 27th lap and spun in turn four after the skid plate got stuck in the rack. That knocked him out of the fifth spot and drew the third and final yellow.

Notes: Stovall's payday matched the $10,000 he earned at 2012's Pelican 100 at ArkLaTex Speedway in Vivian, La. .... Stovall’s temperature gauge reported his engine running hot, and he planned to swap engines for Tuesday’s race in West Liberty. He suspected a faulty gauge. … Eleven of 24 starters completed 50 laps. ... Fourteen were running at the finish. ... Andy Eckrich started on the pole of the second heat but eventually faded and retired; he worked out his mechanical problems and transferred to the feature through the consolation race. … Ryan Gustin of Marshalltown, Iowa, went up in smoke in the first heat. He was eligible for a provisional, but without a backup car, he scratched for the night. … Farley and Tuesday's race at West Liberty are MLRA's richest standalone events in 2015 at $10,000-to-win. ... Justin Kay, who finished eighth in the MLRA feature, notched the night's IMCA-sanctioned Late Model event.