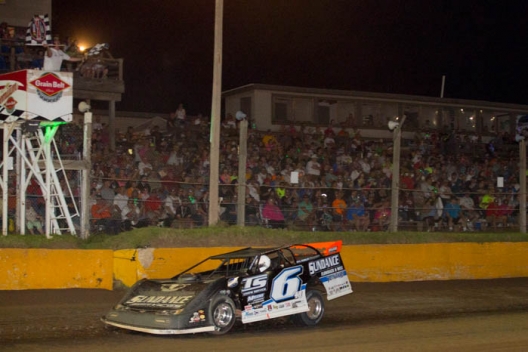 Davenport, whose stellar 2015 campaign already included a $100,000 payday at Eldora Speedway's Dirt Late Model Dream and a $26,000 Prairie Dirt Classic triumph at Fairbury American Legion Speedway just one week ago, overtook Dennis Erb Jr. of Carpentersville, Ill., on lap 23 of the 100-lap race and pulled away from Billy Moyer of Batesville, Ark., in the closing laps on his way to his first USA Nationals victory.

The 31-year-old Davenport drove his Kevin and Lee Roy Rumley-owned Longhorn Chassis to his 16th overall victory of the season and his third of the year on the WoO tour.

"This is unbelievable. It's really just like a fairytale," said Davenport, who completed a sweep of Cedar Lake's USA Nationals weekend after also winning $6,000 in Thursday night’s WoO tune-up event. "We've just really done our homework. Kevin's found a few things and it's really paying off. This thing is just so good, and it doesn't matter if it's a flat track, high-banked, big track, small track — it's phenomenal everywhere."

Like he has been for most of the season, Davenport was nearly untouchable in Saturday's race. Starting from the sixth position, he charged to third on the opening lap to settle in behind Erb and Moyer. Davenport overtook Moyer for second on a lap-15 restart and powered around the outside of Erb to take the lead exiting turn two on lap 23.

Davenport was in control from there, running virtually unchallenged until heavy traffic slowed his pace and allowed Moyer to close the gap around lap 70. But Davenport found his groove through traffic by lap 85 and kept a slower car between him and Moyer for the final 15 laps on his way to winning by a margin of 1.618 seconds.

"We took off really good and got to third," Davenport said. "I just kind of rode there through a couple cautions because I wanted the fuel load to burn off a little bit so I didn't lay over on the right-rear too much and hurt the tire. I just waited for that to burn off a little bit, then picked the pace up and tried to get to the lead.

"It was kind of hairy there at the end. I saw everybody was in the bottom, but then saw a couple lapped cars moving up, so I thought I'd better get up in a hurry. I had to slide one lapped car because I wanted to at least get one lapped car between us just so I'd have a little cushion."

Moyer settled for the runner-up finish in his self-designed Victory Race Car while Erb took third in his Black Diamond Chassis. Defending USA Nationals winner Jimmy Owens of Newport, Tenn., finished fourth in a Club 29 Race Car with Chase Junghans of Manhattan, Kan., rounding out the top five in a Capital machine.

Remarkably, Davenport's stellar weekend at Cedar Lake nearly didn't happen. After his July 25 victory at Fairbury, Davenport, who currently leads the Lucas Oil Late Model Dirt Series points standings, initially planned to take the USA Nationals weekend off in order to spend time at home with family before tackling a busy late-summer and early-fall stretch of racing. But after rethinking the situation, Davenport and the Rumley team decided to make the trip after all.

"I really wanted to come the whole time, but we just don't get many breaks to spend time with our families," Davenport said. "But I told Kevin (Rumley), once you get on a roll like we are, you just gotta stay with it. I know our families sacrifice with us not being there. We all hate that, but this is what we do for a living, and you gotta get it while you can."

After dominating Friday's preliminary action and earning the pole for Saturday's feature, Moyer, 57, felt good about his chances of scoring his long-awaited sixth USA Nationals victory. But after leading only the first lap before getting passed by Erb, Moyer was never able to regain the lead in settling for his third-career runner-up finish in the event.

"He was better than us," Moyer said of Davenport's performance. "We gave it a whirl and gave it all we had, but we came up a little short. The outside came in there for a short little span where you could really rock on that outside, but it went away real quick and there wasn't much we could do after that."

Erb was disappointed not to secure his first crown jewel victory after leading laps 2-22. But the 42-year-old racer was pleased to bring home another solid finish in a major event.

"We had a pretty good car and we're happy with third," said Erb, who finished second behind Davenport at Fairbury's Prairie Dirt Classic after Davenport muscled his way by on the final lap. "I just slipped up a little bit and Billy got by me or else I think we would've at least been second again. But we fell back in line and that was about all we had there."

The race was slowed by four cautions. Bobby Pierce of Oakwood, Ill., brought out the first yellow flag when he slowed on lap two. Chub Frank of Bear Lake, Pa., jumped the turn-three cushion and slapped the wall to cause a lap-15 caution, and Chris Simpson of Oxford, Iowa, stopped on the front straightaway on lap 49 to cause the third yellow. The final caution appeared with 55 laps complete to allow the ambulance to cross from the infield to the pit area.

Frank Heckenast Jr. of Frankfort, Ill., advanced from the 10th starting spot to finish sixth, while 14th-starting Shannon Babb of Moweaqua, Ill., finished seventh after climbing as high as fourth during the race's middle portions. Jason Feger of Bloomington, Ill., finished eighth with A.J. Diemel of Elk Mound, Wis., and Mike Marlar of Winfield, Tenn., rounding out the top 10.

The World of Outlaws Late Model Series takes the upcoming weekend off before returning to action with a Mid-Atlantic tripleheader Aug. 13-15. The national tour visits Delaware International Speedway in Delmar, Del., on Thurs., Aug. 13, Potomac Speedway in Budds Creek, Md., on Fri., Aug. 14 and Winchester (Va.) Speedway on Sat., Aug. 15.

The driver introductions ended at 9:40 p.m., setting the stage for the start of the USA Nationals. As the track lights come back on the field will begin rolling around the track, with the green flag moments away.

Cedar Lake’s famed USA Nationals driver introductions — complete with the absolutely packed house of fans lighting up the stands by displaying the blinking lanyards they received upon entering the facility — began at 9:25 p.m. CT. The first driver introduced, of course, was 29th starter Scott Bloomquist, who said he switched to his backup car after struggling in the last-chance race.

At 9 p.m. CT and with Cedar Lake's weekly Late Model feature completed (Darrell Nelson was the winner), drivers and crew members are gathering outside of turn two to keep a keen eye on the track-reconditioning work being done to the speedway. The countdown to Cedar Lake's driver intros is on ...

Though it appeared Scott Bloomquist would have to watch the USA Nationals feature from the sidelines after failing to transfer in the last-chance race, officials announced that he will start 29th in the 100-lapper using a past champion’s provisional. An official announcement revealed that there was a miscommunication concerning the parameters of the past champion’s provisional between track co-promoter Bob Kauffman and WoO director Tim Christman — the track intended the spot to go to the non-qualified former winner with the most victories in the event, while the WoO stated that the position would go to the most recent USA Nationals winner who failed to qualify. As a result, both Darrell Lanigan (2012 winner) and Bloomquist (five career triumphs) will start the 100-lapper.

At 8 p.m. CT, the track crew is on the speedway reconditioning the surface. Officials plan to run the 40-lap feature for Cedar Lake’s weekly Late Model division before going with the 100-lap USA Nationals headliner.

Jimmy Mars topped the 10-lap last-chance event, leading all the way to beat Bobby Pierce to the finish line by 0.436 of a second. Josh Richards placed third to claim the final transfer spot. Former USA Nationals winner Scott Bloomquist slipped high in turn two on the third lap and fell to the back of the field, leaving him on the outside looking in for the 100-lap feature.

Texan Rodney Sanders led the second consolation from wire-to-wire, beating Morgan Bagley to the finish line by 0.420 of a second. Brandon Sheppard ran second for much of the distance but was shuffled back to a third-place finish following a restart on lap 11 for a caution period caused by Gregg Satterlee, who slowed after his smoking car succumbed while running in fourth place. Bobby Pierce made a bid for the final transfer spot on the lap-11 restart but settled for fourth place, while former USA Nationals winners Scott Bloomquist and Rick Eckert finished fifth and sixth, respectively, and WoO points leader Shane Clanton placed seventh.

Eric Wells scored a flag-to-flag victory, racing unchallenged most of the distance. Boom Briggs drew close on the final circuit but finished 0.680 of a second behind the victor. Chub Frank placed third, taking the final transfer spot. Former USA Nationals winners Jimmy Mars and Josh Richards finished fourth and fifth, respectively, but will have another shot at the feature field in the upcoming last-chance race. Other past event winners failing to make the cut were Darrell Lanigan (finished eighth) and Tim McCreadie, who slipped to back of the pack early in the race and retired on lap 11.

The 28th annual USA Nationals weekend concludes on Saturday night at Cedar Lake Speedway with the running of the 100-lap feature paying $50,000 to win.

Two B-Mains (with three transferring from each) and a 12-lap last-chance race (two more qualifiers) are on the agenda for the WoO Late Models. The field will be rounded out by two WoO points provisionals; a provisional for a past champion or the highest finisher in Thursday night’s WoO A-Main who did not make the feature cut; and a FANSFund provisional.

Officials said that lineups for the B-Mains will be posted at the conclusion of the drivers' meeting that begins at 6 p.m. CT.

Billy Moyer of Batesville, Ark., earned the pole position for the USA Nationals with his victory in Friday night’s 5-lap dash for heat winners. Defending race champion Jimmy Owens of Newport, Tenn., will take the green flag from the outside pole.

With a threat of rain entering the picture from 8 p.m. onward, WoO and track officials have moved up the starting time of the program a half-hour. Hot laps are scheduled to begin at 6:30 p.m. CT with racing slated for a 7 p.m. start.; officials plan to monitor the weather conditions and adjust the order and pace of the show accordingly to make the best effort to complete the 100-lapper tonight.