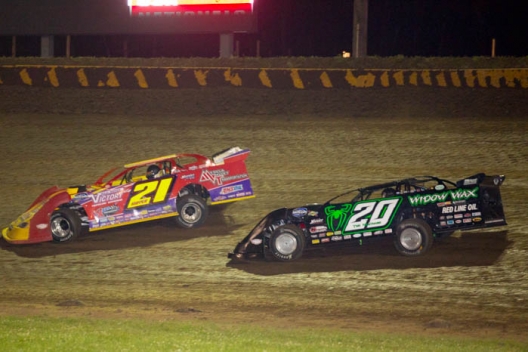 Moyer, who won the USA Nationals five times between 1988 and 1993 before going winless in the event for more than two decades, will chase his sixth Wooden Eagle trophy from the pole of Saturday's 100-lap USA Nationals A-Main after dominating Friday's prelim action.

The 57-year-old Moyer won the first of five heat races for the $50,000-to-win World of Outlaws Late Model Series event and claimed the Pole Dash to earn the inside-front-row starting spot for Saturday's main event. For good measure, Moyer capped Friday's action with a victory in the 12-lap FANSFund Dash for the 11 drivers participating in the USA Nationals as part of the event's fan-voted and -funded travel program.

"Back in the day we really had a handle on this thing and knocked off a lot of them. Now we just gotta get our act back together one more time," said Moyer, whose three-win night came behind the wheel of his self-designed Victory Race Car. "We're happy with the pole and we'll take it, but there's a lot of cars here and a lot of things can happen in 100 laps. Hopefully luck shines on us again up here."

Defending USA Nationals winner Jimmy Owens of Newport, Tenn., will join Moyer on the front for the start of Saturday's feature after finishing second to Moyer in the five-lap dash. Fellow heat winners Dennis Erb Jr. of Carpentersville, Ill., Chase Junghans of Manhattan, Kan., and Jason Feger of Bloomington, Ill., rounded out the dash's five-car field and will start Saturday's feature third through fifth, respectively.

Owens, who charged from fifth to win his heat race and earn a spot in the dash, feels good about his chances of becoming just the third driver to win the USA Nationals in back-to-back seasons.

"I kind of messed up qualifying and wasn't where we wanted to be," said Owens, who piloted his Rowland Racing Club 29 Race Car to the heat race victory. "We didn't get too carried away and thought the track would come to us a little bit. Sure enough, it did come to us pretty good in that heat race.

"I think we'll have a pretty good 100-lap race car tomorrow night. We'll see how things go, but I feel pretty confident about it."

Moyer's heat race victory came in a race with a familiar feel to it. In a reverse of the top three finishers in Thursday's WoO tune-up feature at Cedar Lake, Moyer started on the pole of the 12-lap prelim with his son Billy Moyer Jr. of Batesville, Ark., second and Jonathan Davenport of Blairsville, Ga., third.

Davenport, who passed both Moyers late in Thursday's feature to claim a $6,000 victory, took second from Moyer Jr. on the start of Friday's first heat and pressured the elder Moyer the entire distance. But Moyer turned back each of Davenport's challenges for the win. Davenport settled for second, while Moyer Jr. overtook Boom Briggs of Bear Lake, Pa., on the final lap to claim the third and final transfer spot.

Erb controlled the entire distance of the second heat race after pulling ahead of second-starting R.C. Whitwell of Tucson, Ariz., from his pole starting spot. Whitwell finished second after holding off A.J. Diemel of Elk Mound, Wis., and Rodney Sanders of Happy, Texas. Diemel settled for third and will join Erb and Whitwell in Saturday's A-Main, while fourth-finishing Sanders will attempt to make the feature lineup through a consolation race.

Feger led every lap of the third heat race, but securing the win was far from an easy task. Both Chris Simpson of Oxford, Iowa, and Eric Wells of Hazard, Ky., took shots at Feger, with Simpson looking under Feger and Wells lurking to the high side for much of the distance. Feger held on to win over Simpson, while Wells dropped the third spot to fast qualifier Mitch McGrath of Waukesha, Wis., on the white-flag lap.

Owens was the hardest charger among the heat race winners, advancing from fifth to outduel Mike Marlar of Winfield, Tenn., and Shannon Babb of Moweaqua, Ill., in the closing laps of the fifth heat. Marlar took second, while Babb settled for third after leading the race's early laps.

In the fifth and final heat race, Junghans led a top three of all WoO young guys, He paced every lap to finish ahead of Frank Heckenast Jr. of Frankfort, Ill., and Brandon Overton of Evans, Ga.

Saturday's USA Nationals final-night action is scheduled to begin with hot laps at 7 p.m. The two Last-Chance Showdowns will both transfer the top three finishers to the main event. A final last-chance race will give three more competitors A-Main starting spots, while the 100-lap, $50,000-to-win USA Nationals feature will round out the weekend's action.

Billy Moyer ended his nearly perfect night with a flourish, winning the 12-lap FANSFund Dash for the 11 drivers who were invited to participate in the USA Nationals as part of the event's unique fan-funded travel program.

Moving forward quickly from the fourth starting spot, Moyer surged past Jason Feger to grab the lead on lap two and never looked back in the caution-free race. He beat R.C. Whitwell to the finish line by a full straightaway margin for the $2,500 top prize.

Earl Pearson Jr. overtook Feger for third on lap five and stayed there to the finish. Feger placed fourth and Bobby Pierce completed the top five.

The FANSFund Dash paid $1,750 to start as drivers raced to collect their portion of the fund's travel money.

Taking advantage of a pole starting spot in the sprint, Moyer jumped into the lead at the initial green flag and stayed several car lengths ahead of Jimmy Owens throughout the distance.

Moyer will be gunning for his record sixth USA Nationals triumph — but first since 1993 — while outside polesitter Owens will bid to capture the race for the second consecutive year.

Chase Junghans dominated the action, leading the all the way without facing a single challenge. His near-straightaway margin of victory was the largest of the five heats. Frank Heckenast Jr. smoothly raced to a second-place finish and Brandon Overton — after needing an emergency provisional to start Thursday night's feature — was a solid third at the checkered flag. Former USA Nationals winners Jimmy Mars, Scott Bloomquist and Josh Richards finished 4-6, putting them in Saturday-night B-Mains.

Jimmy Owens advanced from the fifth starting to grab the lead from Shannon Babb on a lap-eight restart, using the inside lane to perfection in winning the race. Mike Marlar slipped past Babb in the final circuits to finish second and Babb settled for third. Caution flags flew on lap five for Kent Robinson, who spun to the inside of turn three after backstretch contact with another car, and lap eight when Shane Polonoski slid sideways entering turn one (forcing Robinson to take evasive action).

Jason Feger led the prelim from wire-to-wire, surviving early challenges from both Chris Simpson and Eric Wells to triumph by less than a half-second over Simpson. Fast-timer Mitch McGrath finished third after overtaking Wells on the white-flag lap.

Dennis Erb Jr. dominated the action, leading the entire distance without a challenge after outgunning polesitter R.C. Whitwell for the lead at the initial green flag. Whitwell held off A.J. Diemel to finish second, with Rodney Sanders a couple car lengths behind the pair in fourth.

Billy Moyer slowed the Jonathan Davenport freight train, staying ahead of Thursday night's winner to score a flag-to-flag win. Davenport closed to Moyer's back bumper on lap seven and challenged a few times before slipping back, finishing 0.546 of a second behind Moyer. Billy Moyer Jr. fell from the outside pole to fourth on the first lap but fought back to grab the third and final transfer spot from Boom Briggs on lap 10.

Mitch McGrath of Waukesha, Wis., surprised the field, turning the overall fastest lap of 14.084 seconds in qualifying. The 28-year-old driver's first-ever WoO fast-time honor came in just his third career start on the series — all this week.

Time trials began with an incident that saw Jason Rauen of Farley, Iowa, ram into the rearend of Bonduel, Wis.'s Nick Anvelink, who stopped with mechancial trouble. Rauen continued but Anvelink did not complete a lap.

A 47-car field is signed in for competition. There will be five 12-lap heat races (top three transfer from each) and the winners will compete in a night-ending dash that will determine the first three rows in Saturday night’s 100-lapper. … The performance Jonathan Davenport of Blairsville, Ga., turned in to capture Thursday night’s 40-lap WoO feature remains the talk of Cedar Lake Speedway. He ranked his $6,000 victory as one of his hardest-this year (he has 15 wins) — and he doesn’t expect any to come any easier. “The hardest part is to stay on top,” Davenport said. “After you win one, then we ain’t thinking about that race again. We’re thinking about the next one. That’s the only thing we can do because everybody is working hard to win too.” … Davenport’s crew chief, Kevin Rumley, mused as well on the challenge of keeping a historic hot streak rolling: “We don’t know how hard to work — it’s like, should we try something or should we stay conservative? It’s kind of like leading a race in lapped traffic, right?” … Shannon Babb of Moweaqua, Ill., has switched from his Club 29 Race Car to a Rocket Chassis machine for qualifying action. … Chub Frank of Bear Lake, Pa., viewed Davenport’s Thursday-night performance as bad news for the field. “His car gets better the longer we run,” said Frank, who was right behind Davenport in fourth place midway through the feature but ultimately slipped back to an eighth-place finish. So with a hundred laps (Saturday), we’re all gonna be in trouble.” … Jimmy Mars of Menomonie, Wis., swept last year’s pair of Cedar Lake Late Model support programs during the USA Nationals with his own spec-engine car, but he no longer has that machine in his stable. It appeared he might pull double-duty this weekend by running his father-in-law Paul Gilberts’s No. 21b, but Mars said his brother-in-law, Scott Gilberts, is slated to be on hand to take the car’s wheel.

The 28th annual USA Nationals weekend continues on Friday night at Cedar Lake Speedway with a World of Outlaws Late Model Series qualifying program. Time trials and 12-lap heat races will be contested to set a portion of the field for Saturday night’s $50,000-to-win 100-lapper.

Two Late Model dashes will also be part of Friday’s card. One will pit the heat winners in a battle for starting spots in Saturday night’s 100-lapper, and the other will feature the drivers who came to Cedar Lake as part of the traditional FANSFund program.

Ten drivers accepted invitations to participate at Cedar Lake as part of the FANSFund, which annually raises money through fan and sponsor donations in an effort to attract additional entrants to the crown-jewel event. The group of drivers will participate in Friday night’s FANSFund Dash, which pays a minimum of $2,500 to win and $1,550 to start and allows the competitors to race for their portion of the fund’s travel money.

The only FANSFund invitee who is not entered in the USA Nationals is Dan Schlieper of Oak Creek, Wis., who is sidelined due to a blood clot in his leg.

Friday’s program, which also includes a full show for Cedar Lake’s NASCAR Late Model division, is scheduled to begin with hot laps at 6:40 p.m. CT. Time trials will immediately follow and racing is set to get the green flag at 7:30 p.m.