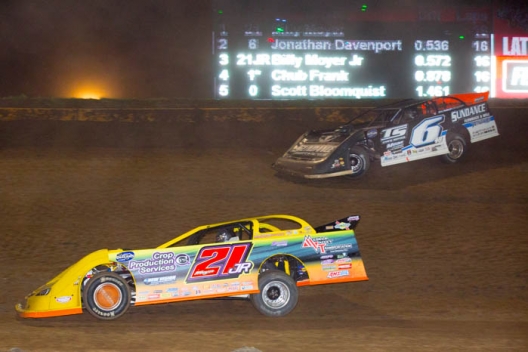 After catching Moyer Jr. with less than five laps remaining, the sixth-starting Davenport edged ahead as the two leaders took the white flag and pulled out front over the final circuit. Davenport crossed the finish line 0.678 seconds ahead of Moyer Jr. to earn a $6,000 payday in an event that served as a tune-up for Cedar Lake's $50,000-to-win USA Nationals that will be contested on Friday and Saturday.

"This car was just phenomenal again tonight," Davenport said of his Lee Roy and Kevin Rumley-owned Sundance Services Longhorn Chassis. "This is definitely good for us. It's a good momentum builder for the weekend. Now we just need a good qualifying lap tomorrow and a good heat race run and see if we can't start near the front on Saturday."

Moyer Jr., who twice led the race for a total of 31 laps, settled for second with his father Billy Moyer of Batesville, Ark., taking third after himself leading laps 11 through 17. Scott Bloomquist of Mooresburg, Tenn., was fourth with Jimmy Owens of Newport, Tenn., rounding out the top five in a caution-free race that was completed in just under 11 minutes.

Much like he did on his way to topping Dennis Erb Jr. of Carpentersville, Ill., in Fairbury's Prairie Dirt Classic on July 25, Davenport again charged around the high line in the closing laps Thursday night at Cedar Lake. Although the top groove was tricky, Davenport expertly rode the cushion to the fourth WoO victory of his career.

"The cushion was right up next to the wall and I kept thinking I was actually hitting the wall," said Davenport, who currently leads the points standings on the Lucas Oil Late Model Dirt Series. "It wasn't easy because you had to be right up there on it, but being up there was what let us get around (Moyer Jr.) there when we got back to him."

After pulling ahead of second-starting Chub Frank of Bear Lake, Pa., on the start, Moyer Jr. controlled the race's early portions until a bout with the cushion in turns one and two allowed both his father and Davenport to charge by him. But Moyer Jr. battled back and used a three-wide pass to overtake both Moyer and Davenport and move back into the lead on lap 18.

Moyer Jr. opened a sizeable gap through the race's middle portions, but the late-charging Davenport and his own struggles with lapped traffic prevented Moyer Jr. from claiming what would've been the first WoO victory of his career.

"We had a real strong run. The car is awesome, but I just gotta do a better job and get through traffic better."

Jason Feger of Bloomington, Ill., advanced from the 12th starting spot to finish sixth, with 10th-starting Brandon Sheppard of New Berlin, Ill., taking seventh. Frank faded to eighth at the finish, with Darrell Lanigan of Union, Ky., and Tim McCreadie of Watertown, N.Y., rounding out the top 10.

Action continues at Cedar Lake on Friday with USA Nationals preliminary racing. The night will feature WoO time trials, heat races and a dash, along with a complete program for the local Late Model division.

The feature field began rolling onto the track at approximately 10:35 p.m. ... Billy Moyer Jr. and Chub Frank share the front row for the 40-lapper. Moyer Jr. has never won a WoO feature while Frank is winless on the tour since August 2009. ... WoO emergency provisionals were used by Chase Junghans, Eric Wells and Brandon Overton. They must forfeit their start money to run the feature.

Billy Moyer Jr. slipped underneath a sliding Jason Feger to grab the lead on lap two and never looked back en route to taking the checkered flag. Feger settled for second and Jimmy Mars finished third after slipping back to fifth from the outside pole.

Chub Frank led all the way, beating A.J. Diemel to the finish line by just over 1 second. Boom Briggs was third to grab the final transfer spot. Polesitter Mitch McGrath became the third driver to be penalized for starting a heat early; he was put back to third for the restart and finished fourth, pushing him to a B-Main. A caution flag flew on the opening circuit when Jason Rauen spun between turns one and two and backed lightly into the outside wall.

Tim McCreadie lost the lead to Brandon Sheppard on lap four but regained it one circuit later, propelling him to victory. Sheppard placed second and Josh Richards held off Shane Clanton to finish third, sending Clanton to a rare consolation appearance.

Scott Bloomquist put on a show, charging forward from the fifth starting spot to take the victory. He passed Shannon Babb for second on lap eight and surged ahead of Mason Zeigler for the lead at the start/finish line on lap nine. Zeigler settled for second after leading the first eight laps and Babb placed third. For the second straight heat the original start was called back, this time for outside polesitter Kent Robinson firing early; he was set back to fourth for the restart and finished fifth.

Jonathan Davenport ran away with the event, beating Darrell Lanigan by 4.467 seconds. Third place was claimed by outside polesitter Bobby Pierce, who rallied after he was ruled to have fired too early on the race's initial start, prompting officials to set him back to the fourth starting spot for the complete restart. Pierce passed Jesse Stovall for third on lap eight and outdueled the Missouri driver on the final circuit for the transfer spot.

In a battle of Dirt Late Model titans, Billy Moyer turned back strong challenges from Jimmy Owens to emerge victorious. Owens actually nosed ahead on the inside to lead lap five, but Moyer roared back the following circuit and pulled away to defeat Owens by 1.346 seconds. Mike Marlar ran alone in third place to take the final transfer spot. The start of the prelim was delayed when Texan Austin Theiss experienced mechanical trouble during the pace laps, dumping fluid on the track and needing a push to return to the pit area.

Billy Moyer of Batesville, Ark., was the overall fastest qualifier, turning a lap of 13.902 seconds. He will start from the pole position in the first heat.

Tim McCreadie of Watertown, N.Y., was quickest in the second qualifying group with a lap of 14.120 seconds to earn a pole starting spot in the fourth heat.

Other heat polesitters are are Jonathan Davenport of Blairsville, Ga., Shannon Babb of Moweaqua, Ill., Mitch McGrath of Waukesha, Wis., and Jason Feger of Bloomington, Ill.

A field of 48 cars has signed in for the evening's action, which will split the time trials into two groups. Drivers in Group 1 will compete for starting spots in Heats 1-3, while those in Group 2 will battle for starting spots in Heats 4-6. The top-three finishers in each 10-lap heat will transfer (winners redraw for top six starting spot in the feature), while three 12-lap B-Mains will each move two more drivers to the headliner. ... The tire rule for this weekend’s action is Hoosier WRS-55, WRS2-55, LM-40 and 1600 (no white dot) compounds. … Shane Clanton of Zebulon, Ga., enters the weekend as the dominant force in WoO competition with nine victories this season, the latest coming Tuesday night at Shawano (Wis.) Speedway. He’s fighting an unspectacular history in the USA Nationals, however; his best finish in six previous feature starts is ninth, in 2004 and ’05, and he didn’t even make the starting field for last year’s 100-lapper. … The red-hot Jonathan Davenport of Blairsville, Ga., originally had the USA Nationals as an off-weekend on their schedule, but after Davenport captured last Saturday night’s Prairie Dirt Classic at Fairbury (Ill.) American Legion Speedway a meeting with his team owners Lee Roy and Kevin Rumley resulted in a change of plans. Deciding their run of success was too good to mess with, they made arrangements to race at Cedar Lake while still spending some time at home after nearly three weeks on the road. They left their hauler at Daren Friedman’s Illinois shop and flew home on Sunday; Davenport and crewman Brian Liverman hopped a flight back to Illinois on Wednesday to retrieve the rig and the Rumleys flew in to Minnesota today. … Bobby Pierce of Oakwood, Ill., who finished second in last year’s USA Nationals feature, arrived at Cedar Lake with a heavy heart. During his trip north on Wednesday night his family’s 6-month-old Siberian Husky, Dash, suddenly collapsed and died while running around at a highway rest stop. “We’re all kind of in shock about it,” said Pierce, whose mother, Angie, took the dog to a local vet this afternoon in hopes of determining the cause of its passing. … Mike Marlar of Winfield, Tenn., is debuting a new Capital Race Car. … Jesse Stovall of Billings, Mo., who has 10 wins this season across the Midwest and is coming off back-to-back top-five finishes in the Lucas Oil Late Model Dirt Series-sanctioned Show-Me 100 and Silver Dollar Nationals, is set to make his first-ever start at Cedar Lake. … Tim McCreadie’s crew chief, Tommy Grecco, is back with the Sweeteners Plus team after spending the past week in North Carolina with his ailing father. … Rodney Sanders of Happy, Texas, is back in the No. 7K machine fielded by Minnesota’s Jason Krohn, who remains sidelined with torn rib cartilage suffered while golfing. Sanders drove the car in Tuesday night’s WoO event at Shawano but was an early retiree because a piece of mud knocked its crank-trigger off and the engine wouldn’t refire. … WoO rookie Brandon Overton of Evans, Wis., will drive a brand-new Black Diamond-Club 29 Race Car owned by J.R. Haley of Baldwin, Wis., who normally fields machines for Wisconsin’s Adam Hensel. Connected with Haley by Black Diamond’s Ronnie Stuckey, Overton is set for weekend-long WoO action to try out a Black Diamond-Club 29 mount while Hensel will focus on Friday and Saturday-night racing in Cedar Lake’s weekly Late Model shows with Haley’s spec-engine car. … Earl Pearson Jr. of Jacksonville, Fla., is making his first USA Nationals appearance since an eighth-place finish in 2010. He will be behind the wheel of Larry Moring’s machine. … Pat Doar, who lives just miles from Cedar Lake in New Richmond, Wis., is a spectator for tonight’s action and plans to compete only in Cedar Lake’s weekly Late Model programs on Friday and Saturday with his spec-engine car. He said his aching back and knee (he recently took cortisone shots in both) have him shying away from the extra work involved with swapping out his spec motor for an open-comp piece. … Brady Smith of Solon Springs, Wis., who announced his retirement from driving during the off-season, is in the pit area lending a helping hand to good friend Rick Eckert of York, Pa.

A Thursday-night racing card has become a traditional lead-in to Cedar Lake’s USA Nationals, which includes time trials and heats on Friday night and last-chance events and the $50,000-to-win 100-lapper on Saturday evening. This is the third consecutive year that the preliminary carries WoO sanctioning.

Thursday’s action, which also includes racing for the NASCAR Midwest Modifieds, is scheduled to start with hot laps at 6:40 p.m. CT. Time trials will follow and opening ceremonies are set for 7:30 p.m.