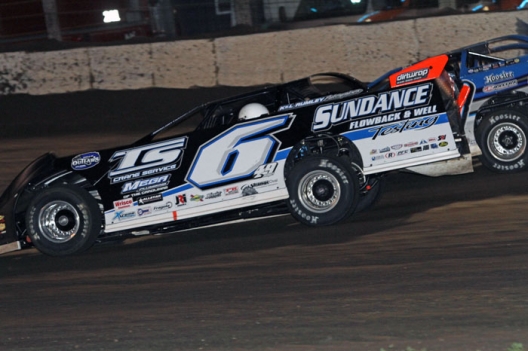 In another thrilling Prairie Dirt Classic A-Main at Fairbury American Legion Speedway, Davenport of Blairsville, Ga., advanced from his eighth starting spot and outdueled sixth-starting Dennis Erb Jr. of Carpentersville, Ill., in an epic back-and-forth battle through the second half of the 100-lap race before using a dramatic final-lap pass to score a $26,000 victory in the World of Outlaws Late Model Series event.

"You couldn't write this in a book any better," said Davenport, whose first WoO LMS triumph of the season gave him his 14 overall victory of 2015 and his fourth payday of $20,000 or more. "This is an awesome place. The facility, the staff, the fans, the way the racetrack races, man this place is awesome."

Fairbury's quarter-mile oval has indeed built a reputation of awe-inspiring racing, especially during the Prairie Dirt Classic. Sanctioned by the WoO for the third consecutive season, the blockbuster event produced its third straight dramatic finish on Saturday in a race that featured eight official lead changes among three drivers.

In true FALS fashion, the event saw close action and building drama through the entire distance before ultimately being decided on the final lap. With a strong run exiting turn two, Davenport cut under Erb down the back straightaway, drove hard into turn three and muscled his way ahead through the final corner. Davenport edged away down the homestretch to a lead of 0.361 seconds as he took the checkered in his K&L Rumley Enterprises Longhorn Chassis.

Erb settled for second in his Black Diamond Chassis, while the Rocket Chassis driven by Brandon Sheppard of New Berlin, Ill., narrowly edged 16th-starting Josh Richards of Shinnston, W.Va., who was fourth in the Rocket Chassis house car. Chase Junghans of Manhattan, Kan., rounded out the top five in his Capital Race Car.

After a lengthy side-by-side battle, Erb cleared Moyer for the lead on lap 31and held the spot until a resurgent Moyer swept passed on lap 50. But Moyer's second stint out front was much shorter than his first. He jumped the cushion on lap 52, handing the lead back to Erb.

The veteran Moyer ultimately saw his hopes of a sixth PDC victory dissipate entirely when he jumped cushion again on lap 56, tagged the wall and came to stop.

With Moyer out of the race, the remaining distance was left to Erb and Davenport to sort out. Picking up the pace against Fairbury's rugged cushion, Davenport stuck with the low-running Erb following the lap-56 restart before charging ahead on lap 65.

Erb recovered quickly, however, and pulled back out front on lap 66. The two leaders raced neck-and-neck through the next 20 laps before Davenport picked up his pace to make a serious bid for the lead.

Davenport used a slidejob through turns one and two on lap 91 to again get by Erb and had opened a slight lead until jumping the cushion on lap 94. Erb took advantage and charged back out front.

The race's final caution with 96 laps complete gave Davenport a chance to regroup for a late-race charge. He took advantage of the opportunity, using a lap-98 slidejob to pull ahead. But Erb crossed over and immediately pulled back out front.

Finally, as the leaders made their final circuit, Davenport charged off of the top of turn two, crossed over to the low groove as Erb drifted high and made contact with Erb as he raced ahead in the final corner.

Davenport certainly didn't hold back with the victory on the line, but he said some close calls with Erb during their back-and-forth battle led him to be extra aggressive in making the winning pass.

"Just like my mom always told me," Davenport said, "you gotta treat everybody else the way they treat you, and that's the way I done him."

Erb, however, wasn't pleased with the final-lap run-in.

"I think we had the best race car here tonight because nobody could run with us once we stayed green," Erb said. "He just got lucky there on the last caution and made a banzai move. I think we'd been alright if we'd had more laps because we were able to pull away the longer we went."

Jimmy Owens of Newport, Tenn., was sixth at the finish after briefly racing into the top five from his 15th starting spot. After starting from the tail of the field in his backup car, Morgan Bagley of Longview, Texas, survived an early spin and recovered to finish seventh.

Tim McCreadie, the Watertown, N.Y., driver who held off Owens to win last year's Prairie Dirt Classic in dramatic fashion, ended up eighth in this year's event after a tangle with ninth-finishing Frank Heckenast Jr. of Frankfort, Ill., caused both drivers to spin on lap 96 and drop out of the top five.

Chub Frank of Bear Lake, Pa., rounded out the race's top 10 finishers. He was also involved in a late-race tangle that left WoO points leader Shane Clanton of Zebulon, Ga., with a flat tire.

The 26-car field for the 100-lap headliner began rolling onto the quarter-mile oval just before 11 p.m. With the rain delay lengthening the program, officials have dispensed with out-of-car driver introductions and will go straight into action after the machines are aligned on the track.

Taking advantage of a restart with one lap to go, hometown racer Mckay Wenger dived underneath leader Ryan Unzicker entering turn three for the final time and had enough traction off the fourth corner to beat Unzicker to the line for a $1,500 victory in the 30-lap Prairie Dirt Shootout non-qualifiers' race.

It appeared that Unzicker was headed to the win after he inherited the lead on lap 26 from Mike Spatola, who slowed with mechanical trouble a straightaway ahead of the field. But Wenger had other ideas, surprising Unzicker with a do-or-die move on the final circuit after Derek Chandler brought out a caution flag on lap 29.

Wenger's final margin of victory was just 0.064 of a second over Unzicker, with teenager Josh Rice placing third, 0.266 of a second behind Wenger.

The cars in the rain-delayed first UMP modified B-Main returned to the track to run in the surface about 10:10 p.m. CT, signaling the restart of action with the weather cleared out.

Officials have made a change in the schedule, moving the Prairie Dirt Shootout non-qualifiers' race ahead to follow the two UMP modified B-Mains. The 30-lapper should run in the track more before the 100-lap Prairie Dirt Classic hits the track.

At 9:10 p.m. CT., no rain is falling on the racetrack — after only light rain fell during parts of the last 40 minutes. Officials continue to monitor the weather, but so far the thunderstorms have missed the racetrack.

There appeared to be only a slight chance of rain hitting Fairbury on Saturday night — and unfortunately, it has arrived. With precipitation beginning to fall lightly at 8:30 p.m. CT ahead of a line of thunderstorms, officials red-flagged the first of two UMP modified B-Mains and had fans clear the stands to wait out the weather.

Morgan Bagley dominated the first last-chance event, taking the lead early in the 20-lapper and racing unchallenged throughout the distance. … Chris Simpson held second place for most of the first B-Main, but after a lap-15 restart he was shuffled back to fourth place and finished there. Boom Briggs overtook Simpson to crack the PDC starting lineup with a runner-up finish. … Jay Morris caught a rut and bounced in the air between turns one and two on lap eight of the first B-Main, nearly flipping before coming to rest and bringing out a caution flag. … Jason Feger led the second B-Main from flag-to-flag. … Brian Shirley slipped by Ryan Unzicker for second place after a lap-12 restart and stayed there to grab the final transfer spot. … Shannon Babb’s bid to rally from the rear of the field in the second B-Man fell short. With only one caution flag slowing the race, he climbed only to eighth and will have to watch the PDC headliner two years after winning it. … WoO provisionals were claimed by Rick Eckert and Eric Wells, who broke a motor during the first B-Man and will run his second car in the feature. … Track provisionals went to Scott Bull and Daren Friedman to complete the 26-car PDC field.

The grand finale of the Prairie Dirt Classic is set to run off on a steamy summer day in central Illinois. While there is just the slightest threat of rain in the early evening, temperatures have soared into the upper 80s, the humidity has risen and winds are nearly non-existent. … Heat winners Chase Junghans, Scott Bloomquist, Dennis Erb Jr., Mason Zeigler, Billy Moyer Jr. and Billy Moyer will redraw for the top six starting positions in the 100-lapper. … Former PDC champion Shannon Babb faces an uphill climb to make the 100-lapper’s field after a heat-race wall smack on Friday night forced him out of the prelim and left him with a last-place starting position in a B-Main. Only the top two finishers from each consolation will transfer and Babb is not in line for a provisional, so he must race his way through the pack. … Five drivers scheduled to start B-Mains have not returned: Mike Provenzano, Michael Kloos, Jay Sparks and Shane Allen. ... Jim Cornelison — the famed national anthem singer for many Chicago sporting events — will be be part of the pre-race ceremonies.

The conclusion of the biggest weekend in the history of Fairbury American Legion Speedway — and Dirt Late Model racing in Illinois — includes B-Mains, a non-qualifiers’ race and the 100-lap Prairie Dirt Classic paying a whopping $26,000 to win. It’s the richest winner’s purse ever offered for a Dirt Late Model event in the Land of Lincoln.

Two 20-lap B-Mains transferring two drivers from each will lead off the program. The PDC field will be filled by two WoO points provisionals, two track provisionals and any WoO drivers who are eligible for emergency provisionals.