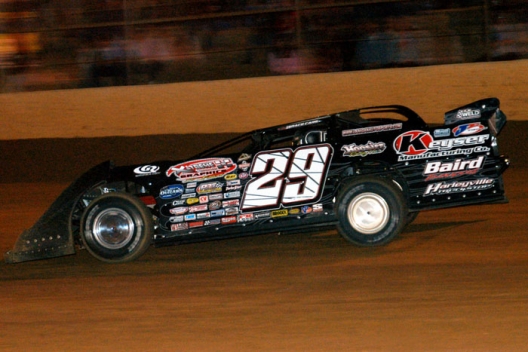 LAVONIA, Ga. (May 3) — Darrell Lanigan of Union, Ky., made a power move on Tim McCreadie of Watertown,N.Y., with 10 laps to go Saturday night at Lavonia Speedway to earn his second consecutive World of Outlaws Late Model Series win.

This was Lanigan's third victory of the season as well as his 56th career series victory while driving his Club 29 Race Car to the $10,000 payday.

"The car has been awesome this weekend. It’s been awesome since we brought it out, can't thank my crew enough, we definitely got good piece here, can't wait for the rest of the year,” said Lanigan, who also won Friday’s tour stop at Fayetteville (N.C.) Motor Speedway.

Brent Dixon and McCreadie brought the field of 20 to life for Lavonia's main event. A false start for Dixon, who fired before the starting point, moved him back to the second row and new polesitter Clint Smith brought himself and McCreadie to the green on the next try. Smith hugged the middle and held down the top spot to lead the opening circuit. McCreadie eventually took the spot from Smith on the third lap with Smith, Lanigan, Dixon and Rick Eckert in tow.

By the eighth lap, Tim Elrod was the first lapped car McCreadie would encounter. Meanwhile, Lanigan worked his way up behind Smith for second and finally grabbed the spot on the 21st lap.

Following another caution on lap 28, McCreadie brought the field down for the restart, then just 10 circuits later Lanigan was on his back bumper to challenge for the lead. Coming off the second turn, Lanigan powered to the inside and grabbed the spot away from McCreadie and held him off for the remaining 10 circuits.

Lanigan crossed the line ahead of McCreadie, Eckert and Smith. Dixon ended up fifth.

McCreadie, who was runner-up, led the majority of the race, blamed himself for losing the lead to Lanigan behind lapped traffic.

"I tried to move him, which was probably the wrong move, and it cost me the race. Dumb mistake on my part,” the Watertown, N.Y., driver said. “We made big gains in a month, that's all I can say, give us another month, we'll be even better.”

Lanigan liked the track, which brought the series to town for the first time. "You could definitely maneuver all over this place,” the winner said.

The ninth-starting Eckert made a run at the end of the 50-lapper and the Rocket Chassis House Car came to life to finish third.

"I made a mistake in the heat race, probably cost me the feature, but the car was really good in the (feature) race there,” Eckert said. “The racetrack was excellent, you could go wherever you wanted to.”

Notes: Lanigan's victory extends Tim McCreadie's winless streak on the series; his last victory came Aug. 3, 2013, at Cedar Lake Speedway's USA Nationals. … Besides the first start, the lone caution appeared on lap 28 when a slowdown was required so emergency personnel could exit the infield and reach the grandstands. ... It was the tour's 14th event in Georgia.