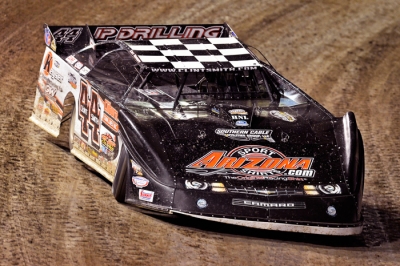 Clint Smith is looking for his first WoO victory since 2011. (thesportswire.net)

Georgians Shane Clanton and Clint Smith are looking for success when the World of Outlaws Late Model Series rolls into their Southern territory this weekend. The tour kicks off a busy month of May this weekend with a pair of $10,000-to-win events in North Carolina and Georgia.

The action starts Friday at 4/10-mile Fayetteville (N.C.) Motor Speedway as the Outlaws will roll into the Larry Norris-promoted speedplant for a 50-lap, $10,000-to-win race during their annual Tar Heel 100 event presented by Ford of Clinton, N.C.

This will mark the first series visit to Fayetteville since April 30, 2010, when Josh Richards picked up the victory, and went on to claim the series championship. Richards also won the Oct. 7, 2008, event and home-state driver Jeff Smith of Dallas, N.C., took the 2009 series victory.

On Saturday the series will make its first appearance to the Stan Lester and Sarah King-promoted Lavonia (Ga.) Speedway for the second 50-lap, $10,000-to-win event of the weekend.

There have been eight different winners in eight World of Outlaws Late Model Series events this season, with Shannon Babb of Moweaqua, Ill., picking up a $20,000 Illini 100 payday Saturday for his 12th career series victory.

Clanton, of Zebulon, and Smith, of Senoia, are both within a two-hour drive of Lavonia Speedway. Clanton, one of World of Outlaws Late Model Series regulars chasing his first win of the season, says he's looking forward to racing closer to home this weekend.

"Lavonia is about as close as the series gets to racing near our home, it would be special to win one here," said Clanton, who last raced at Lavonia Speedway about six years ago. "We need to win this weekend and hopefully we can.”

The 49-year-old Smith is gunning for his first victory on the series since May 8, 2011, at Needmore Speedway in Norman Park, Ga.

"I'm really looking forward to going to Fayetteville this Friday,” Smith said. The four-time Southern All-Star Series champ will reminisce of days when he drove the Dunn-Benson Ford entry for Carlton and Kemp Lamm. Smith spent nearly six years behind the wheel of that North Carolina-based ride.

"We need a World of Outlaws win," said Smith, who has teamed up with the Florida-based Todd Wood racing group in a Rocket Chassis for 2014. "We've had some motor problems and just haven't been able to get into a rhythm yet. It's tough to win anywhere the Outlaws go. There are no breaks anywhere.”

On Friday at Fayetteville, gates open at 3 p.m. with the drivers’ meeting set for 6:30 and hot laps at 7. Adult general admission is $30 and adult pit passes are $40; see thenewfayettevillemotorspeedway.com for more info.

On Saturday at Lavonia, gates open at noon with the drivers’ meeting at 7:15 p.m. and hot laps to follow. Adult general admission is $25, trackside parking is $30 and adult pit passes are $35; see lavoniaspeedway.net for more info. — Chris Tilley

The Dirt Late Model career of driver Jon Mitchell of Texarkana, Texas, includes titles on the Arkansas Motorsports Professional tour and the Comp Cams Super Dirt Series. Will he take a shot at grabbing a crown on the P&W Sales Southern United Professional Racing?

The 34-year-old driver is on top of SUPR points following Saturday’s victory at Baton Rouge Raceway in Baker, La., a 3/8-mile oval where he once broke his arm in a hard crash. After two series races, Mitchell has a 30-point edge on four-time and reigning series champion Rob Litton.

On Saturday, SUPR competitors head to Greenville (Miss.) Speedway, a track where Mitchell won on the Comp Cams Series in 2009. With the positive early season results for Mitchell, it will be hard to ignore an opportunity to chase the title on the SUPR tour that will kicked into high gear over with a Memorial Day weekend doubleheader.

"We are playing it by ear and are going to hit all these (SUPR) shows. I been saying I am going to do it every year,” Mitchell said. “We won the Comp Cams points deal and won the AMP series from back in the day. I am kind of getting older and I think it would be neat if we could win this SUPR championship.

“We have never really pursued it for a full year, so we are going to see how it plays out. We try not to focus on the points deal too much. We are just going to let it play out and things will fall where they may, but it's a confidence booster to have these early results.

“We went to the Lucas and World of Outlaws shows and just missed those, having some bad luck. We felt like we really should have been in those races, but this win will get us to Greenville next weekend and maybe have another good run there.”

Mitchell is quick to point out the extensions of his success, "I definitely want to thank Billy and Kim White of W&W Timber, without them, I couldn't do this — they help us big time. We picked up HealthCARE Express, who has come aboard this season and they help get us up and down the road. Integra Shocks, Keyser Manufacturing, KHP Racing Engines, BASE Race Fuels, Kustom Graphics, who does our decals this year, and just a lot of people that play a big role in getting us to the tracks."

"We (Team 5 Enterprises) are trying to build our business up, even though it has taken away from our racing at times, because we are trying to get it up and going. I am happy with the way everything is turning out.”

Mitchell's best season-long effort with SUPR came in 2002 when he finished fifth in the point. As a part-time competitor last season, Mitchell finished 11th. — Bryan Wimberley

The Hershel Roberts Memorial has known no winner other than Ray Guss Jr.  Guss, from Milan, Ill., will try to win the Deery Brothers Summer Series event held to honor his late friend, car owner and fellow driver for the fourth straight time May 4 at Quad City Speedway in East Moline, Ill.

A dozen series events had been held at East Moline with just a single repeat winner — Rob Toland in 1998 and 2004 — before Guss launched his streak of three straight Roberts Memorial victories in 2011.

Only one driver in Deery Series history has won four consecutive events at the same track. Mark Burgtorf of Quincy, Ill., accomplished the feat at Lee County Speedway over the course of the 1998-2000 seasons.