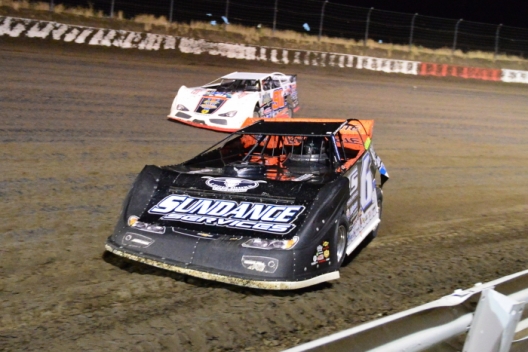 GREENWOOD, Neb. (July 17) — Jonathan Davenport couldn’t be more ready to chase another big-money victory in the Silver Dollar Nationals at I-80 Speedway.

With victories in his pair of heat races during Friday night’s unique two-round qualifying program at the 4/10-mile oval, the red-hot 31-year-old driver from Blairsville, Ga., earned the evening’s most passing points to put himself on the pole position for Saturday’s fifth-annual $32,000-to-win Lucas Oil Late Model Dirt Series event.

“That Longhorn chassis is just amazing to drive right now,” Davenport said of his stout machine from the K&L Rumley stable. “I could run all over the racetrack — bottom, top, go to the top, turn to the bottom, whatever. We just really feel good and maneuverable right now.”

Davenport has been riding this type of wave for about two months now, an amazing, historic run of success that has brought him 11 wins in his last 13 starts, including last month’s $100,000 Dream at Eldora Speedway in Rossburg, Ohio, and the July 12 Show-Me 100 at Lucas Oil Speedway in Wheatland, Mo., that boasted a $30,000 top prize. He’s also dominating the Lucas Oil Series, entering I-80’s big weekend leading the points standings and with two consecutive wins and seven victories in his last nine starts on the tour.

The sizzling racer was so strong in winning twice during Friday night’s 12-heat qualifying show — his first heat from the third starting spot, the second from the eighth position — he didn’t even worry about a backstretch scrape early in his second-round heat that could have proved disastrous if he had forced the issue.

“It is a little bit different coming up here because I was running with some guys I never have ran with and you really don’t know what they’re gonna do, if they’re gonna give you room or not,” said Davenport, who became just the third driver to win two heat races under the Silver Dollar Nationals’ unique format, joining Tyler Reddick and Brian Birkhofer (both in 2012). “I was gonna go in there and then he come up and we did hit a little bit and I backed off. I said, ‘I got plenty of time.’ I was like, ‘I’m just gonna bid my time, my car’s good enough.’

“It’s just an awesome run for us right now.”

Davenport certainly isn’t taking anything about his speed for granted, however.

“There’s a couple other cars I’ve seen that have really stepped up and they’re getting faster and faster so I’m sure they’re all gonna catch up eventually, but right now we’re gonna ride this as long as we can,” said Davenport, whose finished 19th (after using a provisional) in his only previous Silver Dollar Nationals start at I-80 in 2012. “Everything’s clicking, everything’s going good, (but) we might go out here tomorrow and run 15th — that’s the big thing about dirt racing … you never know. You can be on top of your game one night and get lapped car.

“We’re just fortunate we get to start up front, hopefully keep our fenders clean and be there at the end.”

One of the drivers who will attempt to upset Davenport in Saturday night’s finale is Tad Pospisil of Norfolk, Neb., who secured the outside pole for the 80-lap feature with a last-to-first victory in his first-round heat and a runner-up finish to Dennis Erb Jr. of Carpentersville, Ill., in the second round. The regional racer was walking on air after his superb performance.

“It is unbelievable,” said Pospisil, who won Thursday night’s Super Late Model Racing Series feature at I-80 that served as a lead-in to the Silver Dollar Nationals. “To come f rom the back and win our heat race … it worked out we had a caution right in the middle to gather the cars back up and move to the bottom early enough to get traction and get by them guys. Then to chase Erb down in the second heat race and almost get him — one mistake, and we would’ve got him — and just to start pole outside and next to Jonathan Davenport who’s been winning all these races, it’s unbelievable.

“To come out here and line up on the pole outside is awesome, and I’m gonna live every moment of it up.”

Jonathan Davenport’s pair of heat-race victories put him atop the passing-points standings, giving him the pole position for Saturday night’s 80-lap Silver Dollar Nationals feature. He will share the front row with Tad Pospisil, who charged forward from the 10th starting spot to win his first-round heat and was a runner-up to Dennis Erb Jr. in his second-round prelim. … Three former event winners made the finale’s starting field: Jimmy Owens starts third, Scott Bloomquist goes off ninth and Don O’Neal will start 16th. … Lucas Oil Series regulars who failed to qualify under the passing-points format included Earl Pearson Jr., Erb and Steve Francis. They will run last-chance races on Saturday night. … Jesse Stovall was 21st in passing points — forcing him to a Saturday B-Main — after a flat tire on the last lap of his first-round heat knocked him out of second place. He did end the evening with a $2,000 victory in the Cubby’s Chase to the Silver Dollar Nationals invitational event. He crossed the finish line ahead of Chad Simpson and R.C. Whitwell in the race, which saw 18 cars take the green flag with the last six in the running eliminated after each of two six-lap segments to set up a six-car, six-lap spring to the checkered flag. … Rodney Sanders, who starts 15th in the Silver Dollar Nationals finale, scored a $3,000 triumph in the evening’s 35-lap USMTS modified feature.

Chris Brown survived a furious late-race challenge from Brandon Sheppard to capture the first heat by a slim margin. … Jonathan Davenport continued his Lucas Oil Series onslaught, winning the second heat in convincing fashion. He moved forward to pass Jason Papich for the lead on lap six and crossed the finish line 3.844 seconds in front of Gregg Satterlee, who made a slick burst from fifth to second on a lap-six restart. … Defending race champion Scott Bloomquist controlled the third heat, which saw Chad Simpson hold off Jason Feger to finish second. … Jake O’Neil slapped the turn-three wall on lap four of the third heat, knocking him out of action with right-front suspension damage. … R.C. Whitwell upheld Nebraska’s honor with a victory in the fourth heat; while he’s from Tucson, Ariz., his car owner, Al Humphery, hails from Nebraska. … Jimmy Owens outdueled Billy Moyer for the lead at the start of the fifth heat and went on to claim the victory. … Jared Landers looked strong in the fifth prelim, charging forward to pass Moyer for second on lap 10. … Dennis Erb Jr. topped the sixth heat, denying polesitter Tad Pospisil a second heat-race triumph.

Coming off a victory in Thursday night’s SLMRS feature, Tad Pospisil charged forward from the 10th starting spot to win the first heat. The triumph gave him the maximum number of passing points, giving him a good jump on a starting spot near the front of Saturday night’s Silver Dollar Nationals finale. … Robbie Anderson brought out a caution flag early in the first heat after slapping the outside wall. … Garrett Alberson slowed with mechanical trouble on lap four while leading the first heat. … Billy Moyer dominated the second heat, beating Chad Simpson by more than four seconds. … Jesse Stovall’s run from the ninth starting spot to second place in the second heat was dive-bombed by a blown left-rear tire that caused him to slow on the final lap. … Randy Timms hit the turn-one wall during the second prelim. … Earl Pearson Jr. steered to an uncontested victory in the third heat. … Eddie Carrier Jr. pulled off a last-lap pass of Chris Simpson to claim the third finishing position in the third heat. … As Jared Landers cruised to victory in the fourth heat, Jimmy Owens overtook Rodney Sanders on the last circuit to finish second. … Jason Utter controlled the fifth heat, crossing the finish line ahead of Californian Clay Daly — a first-time I-80 visitor — after a lap-11 caution flag for an incident that saw Justin Duty back into the turn-two wall and get clipped by Cory Dumpert. … Jonathan Davenport absolutely dominated the sixth heat, winning by 5.519 seconds over Don O’Neal, who nipped Brandon Sheppard for the runner-up spot.

The three-day event kicked off Thursday with an open practice for Lucas Oil and USMTS competitors along with a complete racing program for the Nebraska-based Super Late Model Racing Series. The preliminary event’s $2,000 top prize was captured by Tad Pospisil of Norfolk, Neb.

Friday night’s card features hot laps and two rounds of six heat races for the 60 Late Model competiors on hand along with a complete racing program for USMTS entrants. No time trials will be contested for the Dirt Late Model division; heat races will be aligned by a draw and combined passing points from the prelims will set the lineups for Saturday’s 100-lap main event. The top 18 drivers in heat race passing points will be locked in the 80-lap feature, while remaining drivers will run consolation races on Saturday to secure feature starting spots. The 32-car feature field will then be filled out with multiple rows of provisional starters.

New to the Friday-night action this year is the Cubby’s Chase to the Silver Dollar Nationals event, a special race split into three 6-lap segments.

Friday's program is scheduled to get under way with hot laps at 7:15 p.m. CST.

DirtonDirt.com is offering pay-per-view video coverage of the action with the broadcast set to begin around 7 p.m. CT. ... The Silver Dollar Nationals is Nebraska's richest dirt race, with the winner's purse continuing its upward trajectory by jumping to $32,000 from the $30,000 prize offered last year and the start money going from $1,400 in 2014 to $1,500 this year. … The 4/10-mile oval near Omaha is promoted by the racing-rich Kosiski family. ... Previous Silver Dollar Nationals winners are Don O'Neal (2011), Brian Birkhofer ('12), Jimmy Owens ('13) and Scott Bloomquist ('14). ... Lucas Oil Series points leader Jonathan Davenport finished 19th (after taking a provisional starting spot) in his lone I-80 start in 2012. He enters the weekend with nine tour victories this season, including two in a row (he swept last weekend’s Diamond Nationals/Show-Me 100 doubleheader at Lucas Oil Speedway in Wheatland, Mo.) and seven wins in his last nine events. … Sultry conditions prevail for qualifying night with afternoon temperatures nearing 100 degrees.