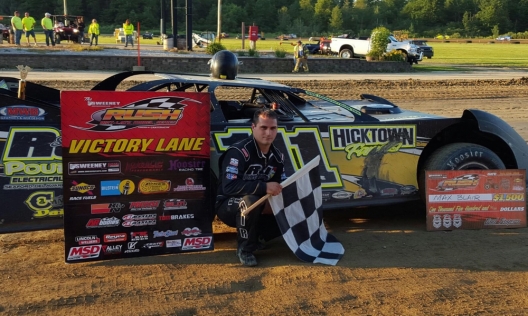 Dustin Jarrett
Max Blair won the Trumbull County Fair Race for the fourth time.
What won the race: Max Blair of Centerville, Pa., took the point at the drop of the green flag and led all 25 laps for $1,500 and his fifth RUSH Dirt Late Model Series victory of 2015 in the Trumbull County Fair Race. Blair previously won the event in 2009, '10 and '14.
Quotable: "It's tough being rough and being a big track, but I sure do love racing here," the 25-year-old winner said. "We always have a lot of fun and look forward to coming. Hopefully we'll have the chance to keep coming back for a long time. It's tough with the weather, but at least we raced for all you fans up there. That's what's cool about coming here is having all these people watch and that's what makes it fun."
Key notes: Just four cars were running at the finish. ... Blair has yet to finish worse than third in 10 RUSH touring events this season. ... Polesitter Jeremy Wonderling and 13th-starting Kyle Lukon scratched from the 25-lap main event. ... Jake Gunn spun on the opening lap. ... Brian Knowles was black-flagged for returning to the speedway after a pit stop and intentionally drawing a caution. ... Joe Sylvester and John Waters tangled with eight laps complete, leading Waters to bring out a caution. ... Four laps later, Sylvester got sideways and struck an infield tire in turn four. ... Racing began at 6 p.m. because the track has no lights. ... RUSH Sportsman Modifieds were also on the card.
On the move: Matt Latta of Conneault Lake, Pa., started seventh and finished third.
Winner's sponsors: Blair's Rocket Chassis is sponsored by R&J Poultry, Moody & Sons Welding, D.I. Anderson and Genesis Shocks.
Points chase: Blair extended his series points lead with the victory.
Car count: 15
Polesitter: Jeremy Wonderling
Heat race winners: Alan Dellinger, Eric Wilson
Next series race: July 19, Humberstone Speedway (Port Colborne, ON) $2,000
Editor's note: Results and race details are unofficial.