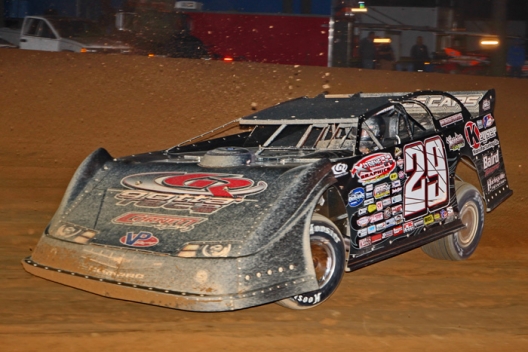 Howard Lawson
Darrell Lanigan become WoO's first two-time winner of 2014.
What won the race: Darrell Lanigan of Union, Ky., took the lead from G.R. Smith of Huntersville, N.C., with nine laps remaining in the 50-lap event and went on to collect $10,000 for his 55th career World of Outlaws victory.
Quotable: "I seen him messing up a little bit coming off of (turn) two," Lanigan said of Smith. "I knew we were good off two, so I just had to hit my marks. I got a good run on him and got by him down the back chute."
Key notes: Austin Hubbard of Seaford, Del., made a guest appearance in Scott Autry's No. 1 Rocket Chassis; Autry skipped the event in favor of a long-planned fishing trip.
On the move: Chub Frank of Bear Lake, Pa., climbed five positions from ninth to record his best WoO finish of 2014 in fourth.
Winner's sponsors: Lanigan's Club 29 Race Car is powered by a Cornett Racing Engine with sponsorship from Gotta Race, Keyser Manufacturing, Performance Rod & Custom and Xtreme Graphics.
Points chase: Lanigan added to his points lead. His 1,358 points lead Rick Eckert (1,282) and Shane Clanton (1,246). Brandon Sheppard was second in points entering the event, but he's dropped off the tour after splitting with the Rocket Chassis house car team and returning to his family-backed program in Illinois.
Car count: 27
Fast qualifier: G.R. Smith
Time: 16.872 seconds
Polesitter: Steve Blackburn
Heat race winners: G.R. Smith, Darrell Lanigan, Jonathan Davenport
Consolation race winners: Austin Hubbard
Next series race: May 16, 201 Speedway (Sitka, KY) $10,000
Editor's note: Results and race details are unofficial.

FAYETTEVILLE, N.C. (May 2) — G.R. Smith did everything he could do to hang onto the lead Friday at Fayetteville Motor Speedway, but Darrell Lanigan was too strong down the stretch and swept past Smith to become the first driver with two World of Outlaws Late Model Series wins this season.

Smith and Rick Eckert battled for much of the 50-lap feature before Lanigan and Jonathan Davenport came on strong in the second half of the feature. A restart with 15 laps to go shook up the contenders when they all tried to go for the same piece of real estate in turn one. By the time it settled, Lanigan jumped from fourth to second and set his sights on Smith.

Then with nine laps to go, Smith started sliding up the 4/10-mile red clay oval, giving Lanigan a chance to drive under him and into the top spot. A caution with eight to go gave Lanigan the clear track he needed to drive off to a 2.292-second, $10,000 victory over Davenport, who was able to sneak past Smith on the last lap while Chub Frank and Eckert rounded out the top five.

"The third caution we just got in there and got in the rut in turn one and got into the side of (Dennis Franklin) and couldn't turn," said Lanigan, the Union, Ky., whose previous WoO victory of 2014 came at Bubba Raceway Park in Ocala, Fla., on Feb. 16. "We fell back three or four spots, but got a good restart the next time and I found a little groove in there and the car was good.”

Lanigan became the first two-time series winner this season through nine races. His victory Friday in his Club 29 machine served as a bit of redemption for a runner-up performance in last week's Illini 100 in Farmer City, Ill.

"I feel like I let the one last week get by me so definitely to win this one makes us feel good," he said. "It's hard to believe, we've had a good car all year, we've been there, just needed a little bit.”

Davenport, the Blairsville, Ga., driver racing out of Mount Airy, N.C., was in the hunt for a win all night long, but ultimately he wasn't able to find a way around Lanigan down the stretch.

"I kept getting stuck on the outside and I kept trying to make it work,” Davenport said. "We probably had a third-place car there but we stuck with it and didn't give up.”

Smith, whose team made the three-hour journey from the Charlotte suburbs with his car on the back of an open trailer, was strong all night. He picked up a $200 bonus for setting quick time, won a heat race, drew the outside front-row starting spot for the feature and raced hard to hold off Eckert, the York, Pa., driver making his second start in the Rocket Chassis house car.

Ultimately, the 32-year-old Smith settled for third, but was pleased with his volunteer crew's effort.

"We had a real good car, setting fast time and winning the heat race,” said Smith, a New Jersey native who drove big-block Modifieds before relocating to Cornelius, N.C. "We just lost it trying too hard. We didn't know what kind of lead we had and got the right rear tire hot and if you give up a little bit to these guys they're good enough to pounce on you.

"We define weekend warrior. I never really looked behind me, or looked on the board. I didn't really care because I knew whether it was Rick Eckert or Darrell Lanigan or Jonathan Davenport, these guys are national champions. I made my mind up in the pit area before we went out there that we were going to go out swinging. We came up about eight laps short. At least we know we're knocking on the door.”

Notes: Lanigan's 55 carrer WoO victories are the most of any driver. ... He broke a streak of eight races without a repeat winner to start the season and remains the only WoO regular to reach victory lane in 2014. … Brandon Overton of Appleton, Ga., started seventh and made it up to third, but was forced to retire early with overheating issues. ... Boom Briggs of Bear Lake, Pa., drew a lap-27 yellow. ... A caution slowed the action on lap 24 for Frank Heckenast Jr. of Frankfort, Ill. ... Shaun Harrell of Raeford, N.C., received a push to the pits before the feature even took the green flag.