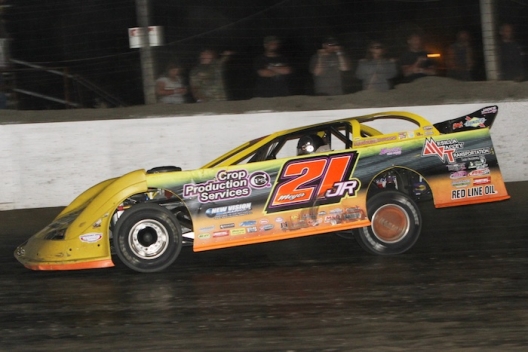 WAUSEON, Ohio (July 11) — It wasn’t that long ago that Billy Moyer Jr. of Batesville, Ark., was questioning the future of his Dirt Late Model Racing career. But his decision to stick with the sport has paid off in a big way.

“We just got lucky and hit that sweet spot right then,” Moyer said of a pass that had him sliding between the two front row starters on the first lap.  “I think Jeep (Van Wormer) slipped his tires a little bit. It was a good move. But I’ve lost them like that and I’ve spun out in front of the field before. It was pretty fun that time, but it’s always one or the other. You can’t get too high and you can’t get too low.

“I hate to get too greedy on the first lap, but man, we had to rock then I think. We didn’t have to rub on anybody … I’ve got a lot of respect for a lot of people here and try to run as clean as I can. They left me room and we kind of went through there.”

Entering Saturday’s program, Moyer Jr. rested just 30 points behind leader Bobby Pierce of Oakwood, Ill., in the series standings. While his victory wasn’t enough to clinch the Summernationals title (falling short by 10 points), the Arkansas driver is glad to be running up front. He closed his 2015 Summernationals campaign with two tour victories.

“We tried really hard and we had a good hot rod tonight,” Moyer Jr. said. “Ten points shy, it is what it is. Bobby (Pierce) done a good job and we’re just glad to be winning races and running up front. People at least know we’re there … it’s no fun running seventh and 10th every night and we’ve been there too. So we’re just glad to be up front.

“I hate to even think about the points, but you know, you have to. It pays a lot of money. I want my name on that deal. But we’re gonna get it on there … we’re gonna work really hard and come back and hopefully do it again next year if all my support and everything stays the same. It sucks to get beat, but man, to win $10,000 here in Ohio with a huge crowd, I’m happy.”

Sixth-starting Casey Noonan of Sylvania, Ohio, advanced four spots to finish runner-up, with Jason Feger of Bloomington, Ill., holding on to his third-place starting spot. Polesitter Dona Marcoullier slipped to finish fourth, with Bobby Pierce charging from the 12th starting position to round out the top five.

“He was definitely on a rail,” Noonan said of Moyer Jr.’s run. “All props to him, he had his car hooked up for sure … a little better than us everywhere I think. We had a pretty good car, had a good night.”

Along with his third-place finish, Feger also finished third in the final series points standings behind Pierce and Moyer Jr.

“I’ve never really been that good here,” Feger said of Oakshade. “I think the best I’ve ever done was like eighth or ninth, maybe. So I’m pretty happy. The car was really good and I know what I can do to make it a little bit better. To come run good at a place you’ve always struggled at feels pretty good.”

The race was slowed by two cautions. A yellow flag waved for Mason Zeigler of Chalk Hill, Pa., on lap 28 when he spun in turn four. Dusty Moore of Swanton, Ohio, drew a caution on lap 41 when he went over the turn-two berm.

Second-starting Jason Feger and third-starting Duane Chamberlain zipped past polesitter Mason Zeigler on the opening lap, with Chas Sentel spinning in turn four to draw a caution. A yellow flag waved for Jacob Rendel on the seventh lap when he spun in turn four. Jason Feger commanded the entire 10-lap distance, with Duane Chamberlain taking the second-place spot. After a side-by-side battle, Mason Zeigler edged Ryan Unzicker for the third-place spot. Unzicker finished fourth to transfer to the main event.

Jumping to the lead at the drop of the green flag, polesitter Dona Marcoullier led all 10 laps to win the second heat. Casey Noonan held on to the second-place spot. Chris Keller finished third, with Rusty Schlenk advancing one spot to finish fourth and transfer to the feature.

Second-starting Billy Moyer Jr. charged to the front of the field, with Phil Ausra spinning on the backstretch to draw a caution on the first lap. A second yellow flag waved on the third lap when Ron Miller and Herb Reich tangled in turns three and four; Miller drew another caution on the ensuing restart. Another yellow flag fell on lap five when Kelly Wahl spun in turn four. Brad Wade drew a caution on lap nine. Moyer Jr. led all 10 laps, with third-starting Matt Miller finishing runner-up. Jon Henry advanced from the sixth-starting spot to finish third, with Dusty Moore grabbing the fourth and final transfer spot.

The program will be made up of hot laps, time trials, heat races consolation races and a 22-car main event.

Several Summernationals regulars have elected to forgo Saturday’s Oakshade finale, including defending champion Shannon Babb of Moweaqua, Ill., and Timothy Culp of West Monroe, La. Babb made the trip to Lucas Oil Speedway in Wheatland, Mo., for the Diamond Nationals, while Culp will compete in Fairbury (Ill.) American Legion Speedway’s $2,000-to-win program. … John Hahler and Jim Moon, both of New Florence, Mo., are among other Hell Tour regulars not on hand for Saturday’s program. … Should 18-year-old Bobby Pierce of Oakwood, Ill., clinch his first career Summernationals title, he will be the youngest driver to ever do so. … Steve Casebolt of Richmond, Ind., is among Saturday’s entrants following a rollover in last week’s Lucas Oil Series event at Portsmouth Raceway Park. … Current track points leader Brian Ruhlman of Clark Lake, Mich., was the winner of last week’s feature at Oakshade. He’s on hand for Saturday’s event.