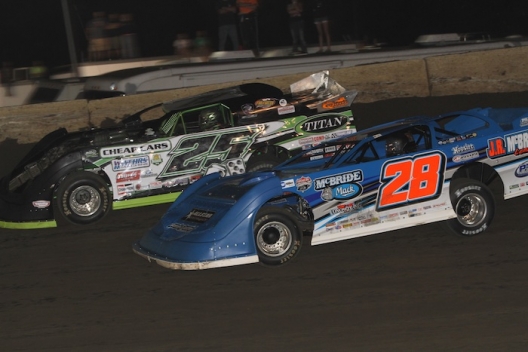 FARMER CITY, Ill. — While polesitter Jason Feger stuck with the high groove at Farmer City Raceway, a hard-charging Dennis Erb Jr. chased him down by driving through the middle of the corners.

Repeatedly Erb cut into Feger's lead, cutting a nearly three-second margin on lap 22 when Erb took the second spot down to virtually nothing in five laps. Over the next dozen circuits, Feger did his best to repel Erb’s charges, but the Carpentersville, Ill., slid in front of Feger in turn two on lap 39.

Erb, a three-time UMP DIRTcar Summernationals champion, kept the Bloomington, Ill., runner-up in check the rest of the way for a $10,000 victory, his second on this year’s Hell Tour and the 19th of his career.

“It was a good race,” said Erb, who credited a harder tire choice for helping his No. 28 to victory lane. “I had to start off a little slow, and I think once our tires came in, it got a little bit better there. We were able to get up there and follow him for a few laps there, see what he was doing, and (I) knew that we could make a move, and it all worked out.”

Feger settled for second in the 50-lapper while Brandon Sheppard of New Berlin, Ill. — like Erb a former tour champion and now a regular on the Lucas Oil Late Model Dirt Series — rallied from 12th to finished third.

Heading into Saturday’s finale at Oakshade Raceway in Wauseon, Ohio, Pierce has a 30-point lead on Moyer and unofficially must finish eighth or better to become the tour’s youngest champion.

“That’s one of the good things here, you know. When the racetrack’s right, you can get out there and move around and put on a good race,” Erb said. “We were having to work our way through there. There was some holes down there in (turns) one and two, it was a little choppy, depending on how you hit it and how you entered the corner, it could’ve bounced you around a little bit.

“You know, we got through it all. He did a good job, he stayed up in his line, and I stayed in my line, and we raced hard and were able to get the win.”

Feger agreed that Erb’s tire choice gave him the advantage later in the race.

“He was able to roll through that middle better,” Feger said. “The top just got awfully rough, and with the softer tire, I lost too much grip. I was just kind of holding on.”

The runner-up tried a crossover move to get back under Erb after the winning pass, but it didn’t quite work out.

“I had a little bit of a run there and I kind of missed the traction a little bit and went sliding. I just didn’t have enough for him,” Feger said. “The top, I just couldn’t run it consistent like I needed to anymore. I could come to him a little bit, and he’d get away, then I’d mess up. It just got too hard up there. It was rough. It was all I could do to hold onto the steering wheel up there. Second’s not too bad.”

At the outset of the feature, Feger took charge with Zeigler and Moyer giving chase in a three-car breakaway. Erb fought his way past Kent Robinson to grab fourth and began tracking down the frontrunners before a lap-10 caution for a slowing Chris Simpson.

Two laps after the restart, the second-running Zeigler slipped over the turn-two banking, then scrambled to recover down the backstretch after losing several positions. The scramble ended with Robinson, the overall fast qualifier, spinning inside turn four.

Zeigler was restored to second behind Feger for the restart with Moyer, Erb and Kevin Weaver in pursuit, but Weaver got into the turn-four wall on the 13th lap and retired while Moyer took second from Zeigler a lap later. Erb dropped Zeigler to fourth on lap 16 while Feger was growing his lead to more than two seconds.

Erb took second from Moyer on lap 22 with Feger comfortably ahead, but Erb quickly closed the gap with the leader in traffic just past the halfway point.

It was nip and tuck for several laps with Erb nearly alongside exiting turn two on lap 33. On lap 36, Feger got too high in turn four and both drivers had to check up to avoid disaster. Erb continued his challenges and made the winning pass three laps later.

Polesitter Bobby Pierce fought off early challenges from Billy Drake for a 12-lap victory. Drake nosed ahead one lap, but Pierce regained command and Drake dropped out on the seventh lap after losing power steering (he received a provisional starting spot. Fifth-starting Chris Simpson got the second and final transfer spot with Scott Bull, Matt Westfall and Joe Harlan rounding out the top five. Ryan Unzicker spun in turn two on the second lap for the race's lone caution. Drake, Unzicker, Harlan and Timothy Culp got provisional starting spots.

With series points leader Bobby Pierce failing to transfer through his heat race and Billy Moyer Jr. winning a heat, Moyer has an opportunity to eat into Pierce's 40-point lead. There's a 40-point difference between first- and 16th-place in the feature. ... Jason Feger of Bloomington, Ill., drew the pole among the redraw of heat race winners. Another No. 25, Mason Zeigler, will be alongside with Moyer Jr. and Kent Robinson in the second row. … Provisionals will be at a premium with series regulars Bobby Pierce, Ryan Unzicker and Timothy Culp in the B-main lineup … Jim Moon of New Florence, Mo., will miss the feature after discovering an engine problem. He time-trialed a borrowed car in hopes of getting a series provisional, but he’s not in line for one. “It was a good run,” said Moon, who ordered engine parts and hoped to be back in action Sunday for a Midwest Big 10 event in Quincy, Ill.

Billy Moyer Jr. cruised to victory in the final heat race while runner-up Michael Kloos had his hands full with Brandon Sheppard through the first half of the race. Kloos finished .613 seconds behind Moyer in second with Sheppard further back in third. McKay Wenger got fourth after stealing the last transfer spot from Joe Harlan just before halfway. The race went caution-free.

Polesitter Jason Feger got the jump on Kevin Weaver, then fought off a large charge by Weaver for a victory in the 10-lapper. Weaver was second with second-row statters Eric Smith and Mike Glasscock getting the other two transfer spots, Glasscock further back than the top three. Kyle Hammer's spin slowed the action on the fourth lap; another caution flew on a botched restart. Paul Stubber slowed with a flat left-rear tire on the eighth lap, but it didn't draw a caution.

Fast qualifier Kent Robinson got a good start and cruised in the high groove to win the second heat over Shannon Babb. Babb stayed with Robinson but never made a serious challenge while Daren Friedman was a bit further back in third. Bob Gardner got the final transfer spot a length ahead of Billy Drake. Two first-lap yellows slowed the race. The first start was called back and Gardner got out of shape in turn two on the second start (he got his spot back).

Polesitter Mason Zeigler slid in front of fellow front-row starter Denni Erb Jr. in turn two on the first lap, then kept Erb in check the rest of the 10-lapper. The top two broke away frm the field by midway with Brian Shirley a distant third after getting out of shape in turn three on the third lap. Shirley transferred along with Scott Schmitt, who held off a late challenge from Bobby Pierce. The lone caution flew on the seventh lap when the No. 74 of Russ Adams went up in smoke and he stopped in front of the frontstretch grandstands. The caution period was lengthy as track workers made sure the oil dropped by the Adams machine wasn't an issue.

Kent Robinson of Bloomington, Ill., topped 47 entrants in Friday’s qualifying at Farmer City Raceway, turning a lap of 12.432 seconds on the quarter-mile oval.

Robinson, looking for his first series victory, will start on the pole of the second heat race. Other heat race polesitters: Mason Zeigler of Chalk Hill, Pa., Jason Feger of Bloomington, Ill., and Billy Moyer Jr. of Batesville, Ark. Series pitns leader Bobby Pierce of Oakwood, Ill., is scheduled to start fifth in the first heat.

While rain has gotten the better of this year’s UMP DIRTcar Summernationals, the tour appears to be ready to go out with a bang with 47 Super Late Models entered for the second-to-last event at a sun-covered Farmer City Raceway.

The month-long tour lost three consecutive events to rain for the second time this week (Vermilion County Speedway in Danville, Ill.; Florence Speedway in Union, Ky.; and Macon Speedway in Macon, Ill.) and, provided Farmer City and Oakshade Raceway’s finale are completed, will have the fewest points races since 1999.

Bobby Pierce of Oakwood, Ill., leads Billy Moyer Jr. of Batesville, Ark., by 40 points and can virtually clinch the title by finishing a few positions ahead of Moyer in Farmer City’s feature.

After group time trials, four heat races will send four drivers apiece to the Farmer City main event while two more drivers will transfer from a B-main (after two C-mains) to set a 22-car field with four provisional starters.

If he can wrap up the championship, Bobby Pierce would become the tour’s youngest champion at 18 years old. Brandon Sheppard of New Berlin, Ill., was 20 when he won the 2013 title. … Series director Sam Driggers dismissed rumors that the series payoff that includes $25,000 to the champion would be reduced because of 11 rainouts. Any rumors are "absolutely not true,” and the posted points fund stand no matter how many series events are completed. … Driggers also said some of the track’s that lost races may add non-point UMP DIRTcar specials later this season paying $5,000-to-win. … Also, in the first drivers’ meeting since the Pierce-Jim Moon clash at Lincoln Speedway, Driggers angrily told drivers that any driver purposefully spinning a competitor would be disqualified. If you take someone out, Driggers said, “make it good, because it’ll be the last (bleeping) time you take sombody out.” ... Instead of heading to Oakshade for the finale, Shannon Babb of Moweaqua, Ill., plans to head to Wheatland, Mo., for Sunday's makeup of the $30,000-to-win Show-Me 100 on the Lucas Oil Late Model Dirt Series (the tour is also racing in Wheatland on Saturday). Babb is locked into the crown jewel lineup along with Billy Moyer Jr. (Pierce and Jason Feger could opt to return to Wheatland on Sunday to start consolation races). ... Lucas Oil regulars Brandon Sheppard and Dennis Erb Jr. are also on hand at Farmer City en route to Wheatland. ... Crate Late Model regular Myles Moos of Lincoln, Ill., is making his fourth start of the season in Dennis Vandersmeerch's Super Late Models. "He wanted to go fast," said Vandersmeerch, who hasn't had as much time to race, "so we're letting him go fast."