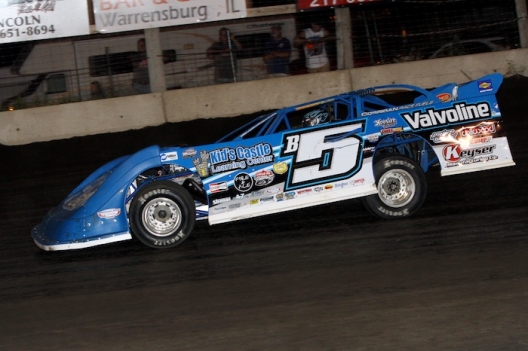 LINCOLN, Ill. — Fresh off his Fourth of July victory on the Lucas Oil Late Model Dirt Series at Portsmouth (Ohio) Raceway Park, Brandon Sheppard headed back to his New Berlin, Ill., home. But instead of kicking back and relaxing, Sheppard continued his new-found momentum, racing to a $5,000 UMP DIRTcar Summernationals victory Monday at Lincoln Speedway.

The fourth-starting Sheppard slipped under race-long leader Billy Moyer Jr. of Batesville, Ark., on the 15th lap, built a lead of more than a straightaway halfway through the 40-lapper, and wasn’t challenged the rest of the way in notching his 10th career Summernationals victory and first in just over one year.

“Things are looking up for us and, you know, I’m really pumped about the rest of the year,” said Sheppard, the 2013 Summernationals champ. “It just means a lot to be on a pretty good run like we’re going, so as long as we can keep the car good and luck stays on our side, there’s a lot of big money races coming up, and our confidence is up, so we’re looking forward to it.”

Outside front-row starter Jason Feger of Bloomington, Ill., posted a runner-up finish during a hurry-up program with officials trying to beat an approaching rainstorm. Brian Shirley of Chatham, Ill., was third while Wendell Wallace of Batesville, Ark., improved nine positions to finish fourth.

Shannon Babb of Moweaqua, Ill., salvaged a fifth-place finish after losing the third spot when he slipped over the frontstretch berm on the 30th lap.

Moyer faded to a sixth-place finish, but gained some ground on series points leader Bobby Pierce of Oakwood, Ill., who finished a lap down in 10th after an early skirmish with first-time series heat winner Jim Moon of New Florence, Mo. Officials said they threatened Pierce with disqualification for hand gestures and his failure to immediately line up for the lap-three restart, but he escaped any penalties, according to series director Sam Driggers.

Moyer took the lead from his pole position, but he had his hands full with Feger and Sheppard shortly after the lap-three restart with the trio entering turn one virtually three abreast.

Moyer got a little breathing room while Feger and Sheppard mixed it up for second, but once Sheppard cleared Feger amid traffic, he pulled off an outside-inside move on Moyer to take the lead exiting turn four on the 15th lap. Within five laps he threaded through traffic to build a 2.5-second lead and a cushion of lapped cars while Feger, who took second from Moyer, struggled to keep up.

“We had a really good car,” Sheppard said. “I think picking the right spot in lapped traffic had a lot to do with it, but my crew guy was showing me I had quite a bit of room, so I must’ve had a pretty good car, so you can’t ask for much more than that. And the track was really good tonight, really racy.”

The caution for Babb bunched the field with 10 laps remaining, but Sheppard cruised the rest of the way, taking the checkers 1.587 seconds ahead of Feger, who entered the race third in points.

“Brandon’s had a lot of laps around here. He’s always tough here every time we come here. Congrats to him and his team, a great bunch of people there,” said Feger, who posted his eighth top-five finish in 16 series races. “We were good. I mean, Brandon kind of snuck by us there (among) some of them backmarkers. … But second place, the car’s in one piece. I’m happy with it.”

“We’ve had a couple of wins and a couple of seconds and been up front quite a bit, so it feels good. Like tonight, I think we could’ve made a couple of adjustments to get better. I feel like we got a real good constant right now going on. … We’ve just gotta keep digging and keep going and see what happens here.”

Shirley, running part-time on the series in 2015, matched his best finish of third in his sixth feature start.

“If the bottom would’ve held a little bit more, we ran side-by-side with Brandon for three or four laps there, and even Feger, but there just wasn’t enough down there to make the move,” he said. “The top side was really the dominant spot.”

Sheppard was glad to notch a victory at a track where he began racing before he passed his driver’s test.

“This is probably the closest track we come to and we don’t get to come here enough,” Sheppard said. “It’s a really racy place and me and my dad basically ran here when I first started, this is where I ran every Friday night. It feels nice to come here in front of the hometown crowd getting a win.”

Notes: Although approaching rain stalled during the evening, Lincoln wrapped up the night’s racing program at 9:15 p.m. with the Late Model event over before 9. … Sheppard’s previous series victory came July 4, 2014, at Fayette County Speedway in Brownstown, Ill. … The feature was slowed by two cautions; the third lap for Bobby Pierce’s spin and the 30th lap when Babb slid off the frontstretch. … Nine drivers completed 40 laps. … Louisiana native Timothy Culp started 15th and finished eighth in his Lincoln debut. … The series is scheduled to run Tuesday at Vermilion County Speedway in Danville, Ill.

Jim Moon's heat race victory was his first-ever on the Summernationals tour. ... With rain approaching from the west, the Late Model consolation was set to go about 8:10 p.m. ... The heat-winner's redraw: Billy Moyer Jr. and Jason Feger are on the front row with Moon starting third in the 40-lap feature. ... Kolby Vandenbergh is on the pole of the consy.

Slipping under early leader Ryan Unzicker at the midway point, low-running Jim Moon raced to his first heat victory on the tour. Mark Burgtorf dropped Unzicker to third a lap later and Unzicker, who ran high early, settled there after dropping to the low groove. Daren Friedman and Donny Walden got the final transfer spots in the non-stop heat.

Overall fast qualiifer and polesitter Billy Moyer Jr. withstood stiff challenges from Brian Shirley in winning the caution-free second heat. Shirley pulled alongside Moyer in turn four on laps seven and eight, but Moyer was able to keep his momentum in the high groove while the lower-running Shirley slipped back. Moyer Jr. barely avoided the wall exiting turn four on the eighth lap. Shannon Babb was third with Timothy Culp a distant fourth, transferring with Bob Gardner.

Jason Feger's high-side momentum carried him past polesitter Brandon Sheppard early and he raced to a 10-lap victory. Sheppard survived a close call with the turn-four wall on the seventh lap in finishing second while series points leader Bobby Pierce was a distant third in the caution-free affair. Scott Schmitt and Wendell Wallace also transferred. Charley Hess retired to the infield after two laps

Two of the top title contenders on the UMP DIRTcar Summernationals will be aiming to keep their wheels on the ground Monday at Lincoln Speedway for the Graue Inc. 40 at the quarter-mile oval.

Bobby Pierce of Oakwood, Ill., this year’s points leader, and Jason Feger of Bloomington, Ill., third in the title chase, both got upside down in last year’s action at Lincoln, which hosts the grueling tour for the ninth time.

Pierce, Feger and other series regulars are in the tour’s home stretch with Lincoln serving as the sixth consecutive night of racing in what could be — weather permitting, of course — an 11-day stretch of continual action heading to the finale at Ohio’s Oakshade Raceway.

The night’s program will be made up of three qualifying groups for time trials, three heat races transferring five drivers apiece and one consolation race to set a 22-car starting field with provisional starters making up the final two rows.

Lincoln Speedway has removed the infield tire barriers ringing the track, replacing it with a berm. ... Charley Hess got into the wall in time trials. ... Illinois native Justin Allgaier, who went spinning after taking the checkers at Daytona in the wee hours, is competing in the modified division.