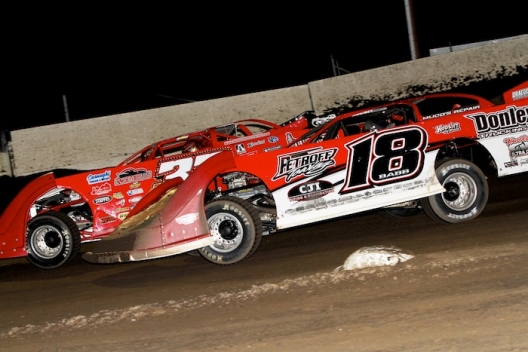 HAUBSTADT, Ind. (July 5) — Shannon Babb of Moweaqua, Ill., considers Tri-State Speedway one of his favorite tracks on the UMP DIRTcar Summernationals tour. And it’s easy to see why.

Babb, who has posted multiple victories at the Indiana oval throughout his racing career, returned to victory lane Sunday night, overtaking Billy Moyer Jr. of Batesville, Ark., on lap 38 of 40 to collect a $5,000 payday and his third Summernationals triumph of the season.

“It was pretty wild out there,” Babb said after the race. “It always is here at Haubstadt. It’s racy as can be and lapped traffic always plays into it a little bit. Billy (Moyer Jr.) was leading the thing … it’s really hard to get off the corner here, so everybody was using the cushion or whatever they could use. It was just good racing everywhere on this place.”

Rolling off from the pole position, Moyer Jr., commanded nearly all of the distance, fighting back early challenges from second-running Cody Mahoney. But as lapped traffic became a factor, the race leader was unable to hold off Babb’s late-race charge, falling to the defending Summernationals champion with less than five laps remaining in Sunday’s main event.

“We started on the outside and got by a couple of them there,” Babb said. “(Billy Moyer Jr.) was really good, he really was. But second place was the place to be and we were able to use the lapped traffic to get around him.”

“This is probably the fifth time I’ve been here and every single time the car looks like this,” Pierce said, assessing his quarter panel damage after the race. “It’s just what you’ve got to do … I saw the white flag there and I slid (Billy Moyer Jr.). I thought I was going to go out of the ballpark. I tried to sail it in there hard enough to where I missed him and give him a chance to get back under me. He did, then he slid me in turn three and I got under him. That was really fun. He raced me really clean and I think I raced him clean. It’s just what happens at this place.”

Third-finishing Moyer Jr. praised Babb and Pierce for running a clean race, but was visibly dejected after the feature, the night’s $5,000 prize almost in his grasp.

“It’s $500 from 11th on back, the exact same money … I think we had a decent lead there for a little bit and then you catch lapped traffic and they don’t show you no respect,” Moyer Jr. said.

“I was pinned in behind the lapped cars. (Shannon Babb) might have been a tick better than me, I don’t know. I think they said we had some room on him. But when we caught lapped cars, I was pinned in there … When I seen it was him I knew he would leave me some room and everything and we had a hell of a race. But it’s just a shame it costs you like over $3,000 for a lapped car. But I guess we’ll take a third. We have to.”

“It’s fun having a little competition between me and him,” Babb said. “I keep telling him he’s older than I am, so he’s got to quit before I do eventually. But you never can tell. He’ll be going till who knows when.”

Scott Weber jumped to the lead on the first lap, but a yellow flag waved when Michael Kloos slowed on the racetrack. Fourth-starting Jason Feger challenged for the second-place spot in the early running, but retired early. Weber edged Robinson at the finish line to win the B-main, with Robinson grabbing the final transfer spot.

Jumping to the lead at the drop of the green flag, polesitter Billy Moyer Jr. led all 10 laps of the fourth heat race. Chad Zobrist held on to his second-place starting spot, with a battling ensuing behind him for third. Ryan Unzicker finished third, with Jeremy Sneed taking the fourth and final transfer spot by a nose over Jason Feger.

Polesitter Bobby Pierce led all 10 laps to pick up the win in the first heat race. Levi Kissinger challenged Pierce in the final laps, nearly besting him at the checkers, but settled for a runner-up finish. Jason Riggs finished third, with fifth-starting Caleb Ashby improving one position to nab the fourth and final transfer spot.

After a three-race Illinois stint, the UMP DIRTcar Summernationals tour returns to Indiana on Sunday night for a $5,000-to-win event at Tri-State Speedway in Haubstadt.

Jason Feger of Bloomington, Ill., captured his series-leading third Summernationals victory of the season Saturday night at Highland (Ill.) Speedway, with Billy Moyer of Batesville, Ark., finishing runner-up. Moyer was the winner of last year’s series stop at Tri-State, but is not expected to be on hand for Sunday’s event, as he heads home to get ready for a long stretch of racing ahead.

Sunday's program will be made up of hot laps, time trials, heat races consolation races and a 22-car main event. UMP modifieds will also be in action.

Saturday’s winner Jason Feger of Bloomington, Ill., is among entrants at Tri-State. Feger, who posted his 14 career Summernationals victory at Highland Speedway, now sits third in the series points standings. … Last year’s Haubstadt winner Billy Moyer of Batesville, Ark., is not on hand for Sunday’s event. … While Shannon Babb of Moweaqua, Ill., fell to fourth in the Summernationals points standings following Saturday’s Highland event, he is a former series winner at Tri-State. His last series victory at the Indiana oval came in 2013. … Wendell Wallace of Batesville, Ark., will make his first Summernationals start since posting a runner-up finish on June 25 at Clarksville (Tenn.) Speedway. … Home-state driver Scott James of Bright has joined the Summernationals field at Tri-State. James finished runner-up in Saturday’s Born Free 40 at Brownstown (Ind.) Speedway. … After wet weather has plagued much of the Summernationals schedule, the tour will contest its fifth straight event, the most races ran consecutively since the series opener on June 10. ... With Sunday's Lucas Oil Late Model Dirt Series event at 201 Speedway in Sitka, Ky., rained out, Dennis Erb Jr. of Carpentersville, Ill., has made the trip to Tri-State.