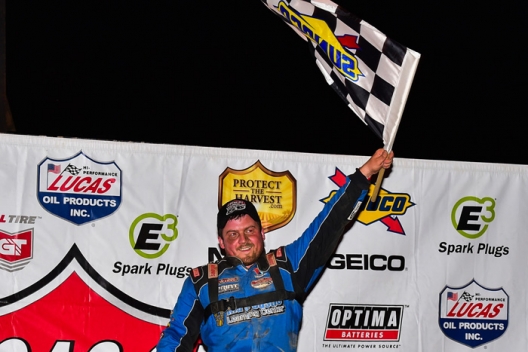 The 3/8-mile oval was the site of Sheppard’s career-highlight victory — a $50,000 score in the 2013 Dirt Track World Championship — and on Saturday night it was the scene of another glorious triumph for the 22-year-old standout from New Berlin, Ill., who captured the track’s Lucas Oil Late Model Dirt Series Independence 50.

Saturday night marked the second Lucas Oil Series checkered flag of Sheppard’s career — both of them coming at Portsmouth. The two victories even bore some resemblance in that the driver known as B-Shepp exploded into the lead in both.

In becoming the first Lucas Oil Series rookie of the year candidate to win a tour feature while chasing the first-year driver crown, Sheppard advanced from the seventh starting spot to blast past Earl Pearson Jr. of Jacksonville, Fla., for the top spot on lap 46. The fast-rising youngster controlled the remainder of the distance to secure a $10,000 win that put him in the Lucas Oil Series’s victory lane for the first time since his October 2013 DTWC success when he made a fill-in start behind the wheel of the Rocket Chassis house car.

Jared Landers of Batesville, Ark., crossed the finish line second, several car lengths behind Sheppard after rallying from a lap-17 pit stop to change a flat tire. Dennis Erb Jr. of Carpentersville, Ill., who started 13th, settled for a third-place after briefly running three-wide for the with Sheppard and Pearson late in the distance, while 12th-starter Jimmy Owens of Newport, Tenn., placed fourth and Pearson slipped to fifth in the final rundown after starting third and leading laps 3-5 and 8-46.

Sheppard, who drove his his family-owned Rocket machine, gambled with his tire compound selection but had enough rubber to mount a late-race charge.

“We went kind of soft of tires, softer than we did when we won here two years ago,” said Sheppard, who leads the Lucas Oil Series rookie of the year chase and sits sixth in the overall points standings. “I saw on the scoreboard that we had 15 laps to go and I knew I really need to get going. Jimmy [Owens] and I battled hard for several laps and then I finally cleared him to get to fourth (setting the stage for his high-side move to gain command).”

Landers, who started fourth, didn’t have enough time to make a bid for the victory but was satisfied with his hard-earned runner-up performance. He led laps 6-7 before being forced to the rear of the field by the flat tire his Sweet-Bloomquist car developed on lap 17 as he battled for the lead with Pearson.

“We are so close to winning one of these races,” said Landers. “I can’t keep the tires on it for some reason. We had a car good enough to win tonight … I was racing hard with Earl (when the flat occurred). Man, our luck has to turn around soon.”

Polesitter Jackie Boggs of Grayson, Ky., was the race’s other leader. He set the pace for the first two laps but retired with mechanical trouble on lap three.

Boggs’s departure came one circuit after a multi-car accident on lap two that created red-flag conditions. The wild incident sent Steve Casebolt of Richmond, Ind., flipping over and also swept up Lucas Oil Series points leader Jonathan Davenport of Blairsville, Ga., who finished 19th and lost a significant portion of his edge in the standings, Davey Johnson of Latrobe, Pa., Kenny Howell of Inez, Ky., and Shannon Thornsberry of Martin, Ky.

Notes: Shepard became the 12th different winner on the 2015 Lucas Oil Series. … Scott Bloomquist of Mooresburg, Tenn., was running second lap 38 when he spun after breaking a left-rear wheel, causing the fifth and final caution flag of a race that last just over one hour. … Half the 24-car field completed 50 laps. ... Devin Moran of Dresden, Ohio, slowed with a flat right-rear tire on the 14th lap. ... Veteran Delmas Conley of Wheelersburg, Ohio, brought out a caution flag on lap 21. … After a previous postponement by weather on Thursday, Lucas Oil Series action at 201 Speedway in Sitka, Ky., was rained out again on Sunday.