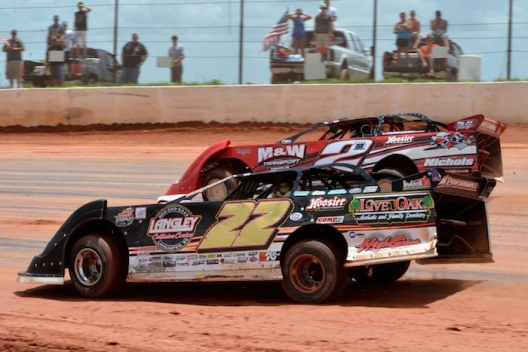 But two laps later in the first-ever Ultimate Super Late Model Series event at the southeastern Georgia oval, Ferguson was kicking himself for making a mistake in turns one and two that allowed Franklin to regain the lead.

The third-starting Ferguson settled down, chased Franklin into the second half of the Red, White & Blue 50, then made the winning move on lap 30 as the Carolina drivers mixed it up at the 4/10-mile oval.

“Any time you got two guys that race as hard as we do, it’s going to happen,” Ferguson said of the contact among the leaders. “I still can’t believe I got back by him, because I thought once I messed up and tried to stay out of the holes in (turns) one and two, I thought it was really going to mess me up … a win’s a win and we’ll take it.”

The Mount Holly, N.C., driver pocketed $10,000 for his sixth special event victory of the season and second on the Ultimate circuit, which saw its main event postponed to Sunday afternoon because of Saturday evening rain.

“First and foremost, I’ve gotta thank God for blessing me with this,” Ferguson said. “I’m never good in the day and luckily the track had enough moisture in the corner where I could still get on the gas.

"My crew guys, my brother and my dad, they made the tire call today and I think that’s what won us the race. I believe we went softer (with tire compound) than about everybody, and it paid off. Thanks to them, thanks to all my guys, my crew guys. I’m worn out. That was a pretty tough race. You really had to hit your marks and not mess up in both corners.

“Helluva race with Rambo. Me and him drive each other pretty hard. We rubbed a little bit, but that’s racing, I think. And I slipped up and let him get back by me, but luckily we got back by him.”

Series points leader Casey Roberts of Toccoa, Ga., made a high-side charge on a restart with three laps remaining that fell short while eighth-starting Ross Bailes of Clover, S.C., grabbed the third spot from Franklin on the last lap. Franklin and Brent Dixon of Elberton, Ga., who debuted a new Black Diamond Chassis during the weekend, rounded out the top five.

Roberts took his overheating car to the pits after the race while Bailes joined Ferguson on the frontstretch for postrace ceremonies.

“That first lap, I broke something on the left-front and just couldn’t steer in. If I got on the brakes, it pushed real bad,” Bailes said. “But there at the end, I was just like, 'I’ve gotta try something, I’m not going to settle back here and just ride around.' I was trying stuff and luckily Rambo, he hit that hole and got bobbled, so I got to third. We’ll take it and go on to the next one.”

Franklin took command at the outset with Ferguson stalking him in the early laps and slipping underneath exiting turn two just before Zack Mitchell slowed with a flat tire.

After another caution for a turn-two collision that involved Kyle Pierce and Scott Shirey, Ferguson led the field to green, but Franklin stayed right with Ferguson and regained the point on the backstretch to lead the 17th laps.

Franklin was in control over Ferguson at halfway while Roberts got sideways in turn four on the 24th lap, slipping behind Dixon and Ivedent Lloyd Jr. before working his way back into contention.

A lap-26 caution waved for Anthony Sanders and Ferguson continued his assault of Franklin, working back ahead on the 30th lap when Franklin pushed exiting turn two.

With Franklin beating and banging with Dixon for second the next few laps, Ferguson stretched his margin to more than three seconds and wasn’t seriously challenged the rest of the way despite a lap-36 yellow for Dustin Mitchell and lap-47 slowdown for Donald McIntosh.