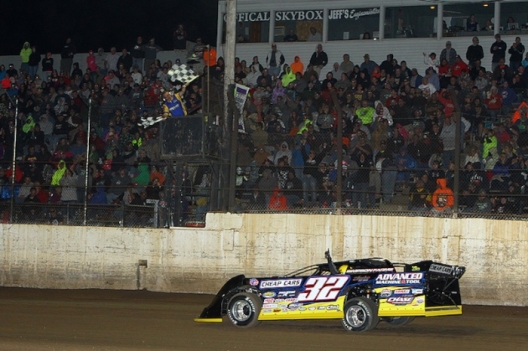 LA SALLE, Ill. (July 2) — It was just one week ago that Chris Simpson of Oxford, Iowa, escaped injury after a cockpit fire ignited and forced him to bail out of his race car during a heat race at Park Jefferson International Speedway in Jefferson, S.D.

Rolling off from the fourth starting position, Simpson battled with second-starting Jason Feger of Bloomington, Ill., in the early running. With lapped traffic holding up the race leader, Simpson overtook Feger on lap 29 of 40, leading the remaining distance for his first victory of the 2015 season.

“This is a long time coming,” Simpson said. “We’ve had a rough start to the year. I talked to (Ronnie) Stuckey this week and was like, ‘We ain’t running bad, we just haven’t had any luck.’ So it feels good. We had an awesome car. The track couldn’t have been prepared any better. We had soft tires on … me and (Jason) Feger had the same thing on. And it all worked out for us. “

While Feger, remaining true to his Highside Hustler nickname, worked the top groove, Simpson said he was able to maneuver his No. 32 machine across the racetrack.

“We ran side-by-side for a while. I’d pass him in (turns) one and two and then in three and four he’d get back by me. But I could tell I didn’t have him cleared going down the backstretch, so I wanted to give him plenty of room. He’s always raced me clean … to run one and two is pretty cool.”

Feger settled for the runner-up spot, with polesitter Shannon Babb of Moweaqua, Ill., finishing third. Fifth-starting Michael Kloos of Trenton, Ill., improved one spot to finish fourth, with ninth-starting Ryan Unzicker advancing four positions to round out the top five.

“The track, it was real fast tonight,” Feger said. “The lapped cars, you came up on them in a hurry and kind of didn’t know which way to pick there. I thought I had the right line chose, and the guy kind of slid the lapped car in front of me and Bob Gardner had to completely lock up the brakes not to hit the guy in front of him. Chris (Simpson) got me boxed in and that’s just the way it goes sometimes. We had a great race going for quite a while there.”

Babb, a former Summernationals winner at La Salle, praised track officials for their efforts with the facility and racing surface.

“That’s the best run we’ve had a La Salle in a long time,” Babb said. “Hats off to the Izzo group. They have done a lot of work to this place, got it looking great. They regraded the whole banking of the track … it’s unbelievable. You could race all over that thing. It’s definitely a big improvement.”

A yellow flag waved on the second lap when second-running Brian Diveley spun in turns one and two, collecting Mike Fryer, with others slowing to miss the collision. Ray Guss Jr. overtook race leader Steve Thorsten in the final laps to pick up the win. Spencer Diercks held off a charging Donny Walden to grab the final transfer spot.

The fourth heat race included an early battle among front runners. Polesitter Billy Moyer Jr. cruised over the field at the halfway point, picking up the heat race win. Fifth-starting Billy Moyer improved three positions to take the runner-up spot. Bobby Pierce was running third, but got into the wall on the final lap, giving Frank Heckenast Jr. the advantage. Brian Shirley finished fourth to transfer to the feature, with Pierce falling to finish sixth.

Jumping to the lead at the drop of the green flag, polesitter Jason Feger led the entire 10-lap distance to win the third heat. Scott Schmitt finished second, with Kevin Weaver edging Billy Drake at the line for third. Drake grabbed the fourth and final transfer spot. A single caution fell for Matt Hahler on the eighth lap when he spun in turns three and four.

The race was brought to a complete restart when Gordy Gundaker spun in turn four on the opening lap. Gundaker was sent pitside after drawing a second caution on the eighth lap when he spun in turn one. Polesitter Chris Simpson dominated all 10 laps to win the second heat. Outside front row starter Curtis Roberts finished second, with Mike Spatola improving one spot to finish third. Matt Westfall finished fourth to transfer to the main event.

Charging around the high side, second-starting Shannon Babb held off polesitter Michael Kloos to win the first heat. Kloos settled for the runner-up spot, with third starting Ryan Unzicker holding on to his position. Mike Mataragas grabbed the fourth and final transfer spot.

With Jason Feger of Bloomington, Ill., capturing his second series victory of 2015 on Wednesday at Daugherty Speedway in Boswell, Ind., the UMP DIRTcar Summernationals tour moves to La Salle (Ill.) Speedway on Thursday for another $5,000-to-win event.

Bobby Pierce of Oakwood, Ill., who finished fourth Wednesday at Daugherty, currently holds a 52-point advantage over Billy Moyer Jr. in the Summernationals points standings. Pierce is a former series winner at La Salle, where he swept the Thaw Brawl weekend to earn a $20,000 payday back in April.

Thursday's program will be made up of hot laps, time trials, heat races consolation races and a 22-car main event. Modifieds, street stocks and hornets will also be in action.

After barely escaping injury at Park Jefferson International Raceway in Jefferson, S.D., just one week ago, Chris Simpson of Oxford, Iowa, is on hand for Thursday’s Summernationals event at La Salle. A cockpit fire ignited in the cockpit of his No. 32 machine, catching the lower right leg of his driving suit on fire and blistering his kneecap. … Billy Moyer is back in the pit area after struggling in Wednesday’s tour stop at Daugherty Speedway. Moyer scratched from racing action action after experiencing issues early in the night. … Former La Salle Speedway track champion Scott Schmitt of Tonica, Ill., is among Thursday’s entrants. Schmitt has multiple victories on the 2015 season, including a Farmer City Raceway-Fairbury American Legion Speedway sweep back in May. … Rookie Late Model driver Matt Westfall of Pleasant Hill, Ohio, posted a top-10 finish in Wednesday’s event at Daugherty. He’ll join Summernationals competitors for the final 10 series events, including Thursday’s stop at La Salle. … Current La Salle points leader Rich Bell of Sheffield, Ill., will aim for his first career Summernationals victory Thursday night. He’s captured the last three weekly events at the speedway.