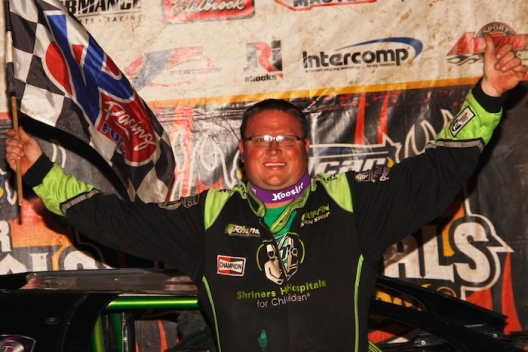 BOSWELL, Ind. (July 1) — As the UMP DIRTcar Summernationals tour made its return to Daugherty Speedway for the first time since 2009, former track champion Jason Feger of Bloomington, Ill., also made his return — to victory lane.

Starting on the pole, Feger charged to the lead at the drop of the green flag, setting a torrid pace over the rest of the field as he sailed around the high side. The race leader fought back challenges from second-running Kent Robinson of Bloomington, Ind., to earn a $5,000 payday in his second Summernationals victory of the season.

“It’s not quite like it used to be, but it’s still a fast place,” Feger said of the racetrack, where he captured the 2008 track title.  “And with all the rain, it was a little rougher than I think it normally would be. But it ended up being a pretty good feature. You were able to race all over and kind of move around. I could just kind of roll in that top groove there and didn’t have to get up on the berm … just rolling the black and it worked out.”

Lapped traffic played a factor in Wednesday’s 40-lapper, with Kent Robinson pulling ahead of Feger to lead lap 30. Feger retook the lead one circuit later, controlling the remaining distance for his 13th career Summernationals triumph.

“The middle groove was really crumby, so it was hard to get in there,” Feger said. “And then you could spin your tires and kind of lose them for a lap or two. You kind of had to keep them under you to keep them digging good. It’s tough. You can go around there so fast and some of them guys aren’t and it makes it interesting.”

With heavy rains plaguing much of the Midwest over the past few days, resulting in four straight rainouts on the Summernationals tour, Robinson praised the track crews for all of their efforts.

“It was fast,” Robinson said. “I had never run a Late Model here, so judging from the speed from a modified to a Late Model, it’s a big difference. You gotta get up on the wheel every lap. It was a little rough, but that’s just how it’s been. I only live a couple of hours from here and we’ve got so much rain in the past week and a half that it’s unreal.

“The track there at the end didn’t get real conducive to double-file racing. But hats off to the track crew. They’ve had a lot of rain up here lately and we had a lot of fun. I didn’t really expect to be that good. We set up to just dig around the bottom, went a little softer than Jason (Feger) on the left-rear tire. And then once the bottom gave up, I had to move up. Kept up pretty well, but we got to lapped traffic there and I had a chance to pull a dirty slider and decided not to because I knew he wouldn’t do it to me. It was fun.”

After a tight battle with Pierce and Heckenast for the third-place spot, Moyer Jr. was able to come away with a podium finish.

“It was fun,” Moyer Jr. said. “I wish it would have been for the lead, but (Jason) Feger and K-Rob done a good job. I got a lot of respect … them guys showed me respect and it’s fun racing like that when you don’t have to worry about hitting each other and everything. Lapped cars kind of helped us tonight. But we had a pretty decent car.”

The race was slowed by two cautions. A yellow flag waved for Steve Kester on lap 18 when his hood came unhinged, blocking his vision. Brian Shirley drew a caution on lap 19 when he slowed in turn two with a right-rear flat.

Series officials made the decision to forgo a C-main after only a few cars made the call for the race. Those cars were added to the tail end of the B-main. … Darin Friedman and Billy Moyer were among drivers scratching from heat races after experiencing issues early in the night. … After the redraw, Jason Feger and Mike Spatola will make up the first row of the feature event. … Provisional starters will be Shannon Babb, Billy Hough, Joe Janowski and John Hahler. ... Devin Gilpin was the winner of the modified feature; he lines up eighth in the Late Model main event.

Polesitter Billy Moyer Jr. charged to the front of the field, with Jay Morris drawing a caution on the opening lap. A second yellow flag waved on the fifth lap when Billy Hough spun in turn two. Guy Volk drew a caution on lap six when he slowed in turn two. Another yellow flag waved for fifth-running Kyle Hammer when hit the frontstretch wall on the ninth lap, setting up a green-white-checkered finish. Moyer Jr. picked up the heat race win, with Devin Gilpin holding on to his second-place starting spot. Jim Moon edged Curtis Roberts for the third-place spot at the line, with Roberts grabbing the fourth and final transfer spot.

Outside front row starter Jason Feger jumped to the lead, with fourth-starting Matt Westfall charging past Bobby Pierce and Ryan Unzicker to take the second-place spot on the first lap. Brian Rickey spun in turn three to draw a caution on lap seven. As the race returned green, Feger led the remaining distance, with Pierce sliding past Westfall in turn two to finish second. Westfall finished third, with Unzicker running fourth to grab the final transfer spot.

Using the high side, second-starting Kent Robinson charged to a commanding lead, picking up a win in the second heat race. Polesitter Brian Shirley slipped one spot to finish second, with Timothy Culp running third. Despite issues with his No. 7, Mike Mataragas was able to hold on to the fourth and final transfer spot.

Polesitter Mike Spatola jumped to an early lead, fighting back challenges from second-running Steve Dimmick when the driver of the No. 11 machine hit the turn-three wall to draw a caution on the fifth lap. Spatola led the remaining distance, with Frank Heckenast Jr. grabbing the runner-up spot. Steve Kester finished third, with Steve Thorsten finishing fourth to transfer to the main event.

Among former Summernationals winners at Daugherty is Shannon Babb of Moweaqua, Ill., who is gunning for his third tour victory of 2015. Babb, the defending series champion, currently sits third in the Summernationals points standings, 71 points behind leader Bobby Pierce of Oakwood, Ill.

Wednesday's program will be made up of hot laps, time trials, heat races consolation races and a 22-car main event.

After forgoing Summernationals events at Peoria, Belle-Clair and Clarksville, Hall of Famer Billy Moyer of Batesville, Ark., has rejoined the Hell Tour field at Daugherty Speedway. … Jason Feger of Bloomington, Ill., was flocked by fans for autographs and photos immediately upon his arrival at the Indiana oval. He’s a former track champion at the speedway. … World of Outlaws Late Model Series regular Frank Heckenast Jr. of Frankfort, Ill., is among Wednesday's entrants. He captured his first career series victory on June 11 at Kankakee (Ill.) County Speedway. … The tour made its last stop at Daugherty, formerly known as Kamp Motor Speedway, in 2009. The most recent series winners at the racetrack include Eric Smith (2009), Wes Steidinger (2008) and Dennis Erb Jr. (2007). None of these drivers are on hand for Wednesday’s program. … Also forgoing a trip to Daugherty is Levi Kissinger of Mount Vernon, Ind., who captured his first career Late Model victory and first career Summernationals victory in last Thursday’s stop at Clarksville Speedway. … Devin Gilpin of Columbus, Ind., is among home-state drivers in the Daugherty pit area. He’ll pull double-duty in the modified division.