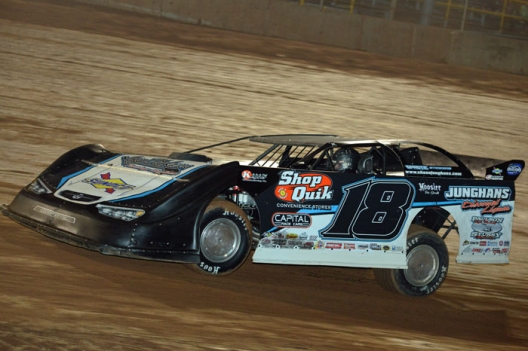 SARVER, Pa. (June 26) — With two of the sport's top drivers behind him and a steady line of lapped traffic ahead of him, Chase Junghans expected his lead in Friday night’s Firecracker 100 preliminary feature at Lernerville Speedway to be shrinking.

Instead, signals from a crew member during the second half of the 30-lap race told the second-year World of Outlaws Late Model Series driver that he was pulling away from former WoO champion Scott Bloomquist and current series points leader Shane Clanton.

"I was just riding around out there trying to be patient and my crew guy was giving me signals saying I was pulling away," said Junghans, the 22-year-old racer from Manhattan, Kan. "I was like, 'Are you kidding me?' But I guess I was, and now, I just don't know what to say. This is surreal."

Junghans was indeed nearly speechless after dominating Friday's A-Main to score his first-career WoO victory during the second night of Lernerville's ninth annual Firecracker 100 presented by GottaRace.com. In notching his fourth top-five finish in the past six WoO events, Junghans earned $6,175 at the 4/10-mile oval and picked up plenty of momentum heading into Saturday's $30,000-to-win Firecracker 100 finale.

Junghans was fast all night at Lernerville, setting quick time in qualifying and finishing second to Clanton in his heat race to earn a spot in the Top 8 Redraw. Luck fell his way in drawing the pole for the A-Main, but he didn't waste the opportunity. He pulled away from an early back-and-forth battle between Bloomquist and Frank and never looked back.

"This feels great, especially having all these good guys here behind us," said Junghans, whose previous best WoO finish was a third-place effort at Fonda (N.Y.) Speedway on June 18. "It definitely helped starting up front, but we made the most of it. Hopefully we can build off of this and maybe win tomorrow or if not at least have a good finish."

A frequent contender at Lernerville, Bloomquist took second from Frank on lap 10 and appeared to initially close slightly on Junghans. But his pace slowed around halfway and the two-time Firecracker 100 winner was forced to settle for the runner-up finish in his self-designed Sweet-Bloomquist Race Car.

"We weren't quite where we want to be, but we're happy with this," said Bloomquist, who made his first laps of the weekend on Friday after a late arrival led him to sit out Thursday's opener. "We've been playing with some different stuff on the car and tonight was the first night we tried it. It wasn't bad, but it wasn't exactly what I was hunting."

With his seventh consecutive top-three WoO finish, Clanton kept his recent hot streak rolling. The co-founder of Capital Race Cars was happy to see a Capital car in victory lane, but he would've liked to have made it a one-two sweep for the chassis brand.

"Any time a Capital car can win, we're happy," said Clanton, whose Capital machine is sponsored by Weldbank Energy. "I told Chase to just go on and run his race and hopefully I'd make it to second. We came close, but I was just a little too tight."

Tim McCreadie of Watertown, N.Y., was sixth at the finish after climbing as high as third midway through the race. Former Lernerville track champion Jared Miley of Pittsburgh, Pa., advanced from 11th to score his second top 10 of the weekend in finishing seventh. Gregg Satterlee of Indiana, Pa., was eighth with Austin Hubbard of Seaford, Del., and Rick Eckert of York, Pa., rounding out the top 10.

The ninth annual Firecracker 100 presented by GottaRace.com concludes on Saturday night. With lineups determined by each driver’s best finish over the two preliminary nights, four Firecracker 100 heat races will each transfer four drivers into the 100-lap, $30,000-to-win finale. Two Last-Chance Showdowns will each transfer three more drivers, while provisional starters will round out the field. The night will conclude with the $3,000-to-win Uncle Sam 30 for non-qualifiers.

With rain beginning to cross the Ohio-Pennsylvania border, officials hurried the B-Mains onto the track immediately after the completion of the heats and will send the 30-lap feature out shortly. It is expected that the 24-car event will be on the 4/10-mile oval by 9:10 p.m. ET. … Chase Junghans drew the pole position, giving him an opportunity to add a feature win to add to his fast-time honors earlier in the night. The 22-year-old WoO sophomore will bid for his first-ever victory on the national tour. … Junghans’s Capital Race Cars teammate, Shane Clanton, will start seventh as he looks to stay perfect this weekend. … Chub Frank starts second, giving him a golden opportunity to snap a frustrating WoO winless streak dating back to August 2009. … WoO rookie Brandon Overton was a late arrival to Lernerville today after missing Thursday night’s program while working to find a replacement for his MasterSbilt by Huey car that was badly damaged in an accident during Tuesday night’s WoO show at Weedsport (N.Y.) Speedway. Overton ended up borrowing a No. 32 machine normally driven at Port Royal (Pa.) Speedway by Lindsay Barton, the girlfriend of MasterSbilt by Huey proprietor Billy Vacek; Overton spent Monday at Vacek’s MBH shop in Martinsburg, W.Va., dropping his motor in Barton’s car and preparing it for Friday action. He was strong with the mount in qualifying, timing second-fastest in his group and finishing second to Scott Bloomquist in the fourth heat.