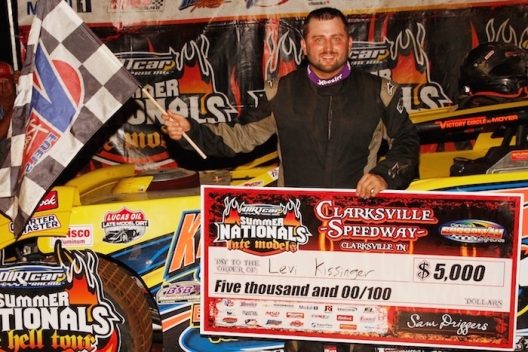 “We’ve been struggling the past month,” Kissinger said after Thursday’s race. “We’ve been terrible. We haven’t even made the show the past few nights. We went to Fairbury and Belleville and we didn’t make the show. We’re learning with this deal. This is a track I’m familiar with.

“I was riding the first half of the racing, trying to keep my tires under me and not burn them up. We caught lapped traffic there and (Wallace) started getting really antsy, like he was driving harder. He just slipped up just enough to let me stick the nose underneath there and I just kind of drove by him there. After that I just had to hit my marks and protect the bottom and just run my race.”

“I run up on some lapped cars at the back of the pack there and they was battling for position,” Wallace said of Thursday’s race. “It just seems like I overworked my tires and he got underneath me. It seemed like he was a little better in the bottom there. Once he got around me, there was no getting back by. He had a pretty good race car.”

The race was slowed by a single caution, with Terry English of Benton, Ky., spinning to draw a yellow flag on lap 29. As the field was bunched back together, Erb made his move toward the front.

“I had a good car all night,” Erb said. “I think we had the best car there at the end … it was real hard getting past (Frost) and (Melvin) when they were running side-by-side. But once we cleared them and I started charging to the front. I just ran out of time.”

But the night was all about Kissinger, who found himself at a loss for words when describing what Thursday’s victory meant to him and his team.

“There’s a lot of good guys, I mean there’s 40 guys that can win every one of these Summernationals races,” Kissinger said. “I grew up watching my dad race Late Models, grew up watching guys that run Late Models for a living, run the Summernationals tour. I’m like, ‘Man, that’d be cool to go run, just run, with them guys, much less win.’ I never in a million years thought we could have won one of these races and to do it this quick in our Super Late Model career is even better yet.”

Terry English charged to the lead at the drop of the green, with a yellow flag waving for Riley Hickman on the second lap. The race was slowed by two more cautions on laps five and 10. English picked up the win, with Kent Robinson holding off Jason Feger to transfer to the 40-lap feature.

Third-starting Brian Shirley drew a caution on the opening lap when he spun in turn one. The race was brought to a complete restart. Rodney Melvin picked up the win, with polesitter Shannon Babb running second. Mike Marlar finished third, while Brian Shirley edged Kent Robinson in the final laps to finish fourth and transfer to the feature.

In the midst of a tight battle for the lead between Batesville, Ark., drivers Billy Moyer Jr. and Wendell Wallace, a yellow flag flew on the first lap when Larry Barber Jr. spun in turn one. Wallace charged ahead of the field as the race returned green, with polesitter Moyer Jr. settling for the runner-up spot. Justin Rattliff finished third, with Jason Riggs running fourth for the final transfer spot.

Second-starting Levi Kissinger took the lead on the initial start, but a yellow flag waved on the first lap when Justin McRee spun in turn one. Steven Ashby drew a second caution when he spun in turn one on the seventh lap. Kissinger dominated the 10-lap distance to pick up a heat race win. Polesitter Ryan Unzicker took the runner-up spot, with fourth-starting Timothy Culp advancing one spot to finish third. Jim Moon finished fourth to transfer to the 40-lap main event.

With polesitter Richard Frost charging to the lead, a yellow flag flew on the first lap for a tangle in turns one and two involving Terry English, Tyler Erb and Gary Christian. Bobby Pierce drew a second caution on the third lap when he spun in turn three. Frost led all 10 laps, with fourth-starting Dennis Erb Jr. improving two spots to finish second. Second-starting Cody Mahoney finished third, with Tanner English grabbing the fourth and final transfer spot.

Pierce became the second driver to net multiple wins on the tour, with defending Summernationals champion, Shannon Babb of Moweaqua, Ill., also boasting a pair of victories. Babb was the winner of last year’s series stop at Clarksville.

The program will be made up of hot laps, time trials, heat races consolation races and a 22-car main event.

After taking the past couple of weeks off, former Summernationals champion Brian Shirley of Chatham, Ill., returns to racing action tonight, making his first Hell Tour start of the season. … Along with Shirley, other drivers making their first Summernationals appearance of the season includes Mike Marlar of Winfield, Tenn., Michael Chilton of Salvisa, Ky., and Riley Hickman of Ooltewah, Tenn. … While five-time series champion Billy Moyer was among entrants for the tour’s first six events, he’s not on hand at Clarksville. He’s expected to rejoin the tour at Paducah on Friday. … Bobby Pierce was the winner of Wednesday’s event at Belle-Clair Speedway in Belleville, Ill. He’ll look to become the first three-time winner on the 2015 Summernationals tour.