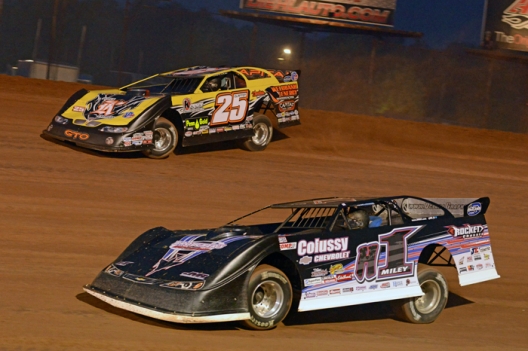 Establishing himself as a heavy favorite to claim Saturday’s $30,000-to-win Firecracker 100 finale, Clanton, 39, of Zebulon, Ga., turned back an early challenge from Jared Miley of Pittsburgh, Pa., and was far enough ahead in the closing laps of the 30-lap feature to survive a valiant late charge by 12th-starting Rick Eckert of York, Pa.

The $6,500 victory — Clanton's WoO-leading seventh of the season and his third in the national tour's past four races — came on the first of two Firecracker 100 preliminary nights at Lernerville's 4/10-mile oval. The 2010 Firecracker 100 winner will look to keep his momentum going in another preliminary program on Friday and in Saturday's 100-lap finale.

"This car was just phenomenal again tonight," Clanton said of his Weldbank Energy Capital Race Cars house car. "If we can just keep qualifying and heat racing like we are and get a good starting spot, then we're pretty confident about our chances in 100 laps around here come Saturday. We've got the dominant car right now; hopefully we can keep it going."

Eckert settled for the runner-up finish after charging from fifth to second in the final 10 laps. The 2011 WoO champion made up considerable ground on Clanton in the closing laps but came up 1.361 seconds short at the finish.

After pressuring Clanton for most of the race's first half, Miley held on to third to record his career-best WoO result. Defending Firecracker 100 winner Darrell Lanigan of Union, Ky., finished fourth and in doing so overtook 17th-finishing Josh Richards of Shinnston, W.Va., for second in the WoO LMS points chase. Eric Wells of Hazard, Ky., finished fifth in Thursday's A-Main, which ran green to the finish after finally getting rolling on the third attempt to start the race.

Clanton's road to victory was made slightly less difficult when he was moved from his initial third starting spot to the pole after Miley, who drew the pole in a redraw among heat race winners and runners-up, was penalized a row for firing too early on the first attempt to start the race.

After a brief opening-lap battle, Clanton pulled ahead of second-starting Mason Zeigler of Chalk Hill, Pa., who was the beneficiary of original outside polesitter Davey Johnson’s jumped start on the second attempt to start the race.

Miley followed Clanton by Zeigler into the second spot and remained within striking distance until the leaders reached lapped traffic just before the halfway point. Clanton was able to negotiate the slower cars much quicker than Miley, allowing his No. 25 machine to pull away to a comfortable lead.

"I just took my opportunities to get by cars when I could," Clanton said of his run through traffic. "I was just riding my line at the top just trying to save tires and be easy on our car. But when I had to get by (lapped cars), I could drive just about anywhere to do it. I can't ask for much more than that out of our race car."

Eckert, 49, was able to keep his Viper Motorsports MasterSbilt machine glued to the track's bottom groove while others struggled. That allowed him to make his late charge and nearly catch Clanton.

"It surprised me that guys kept missing the bottom," said Eckert, who recorded his fourth top five of the 2015 WoO campaign. "That bottom was really nice and most of those guys just weren't patient enough to hit it and get the kind of run off of it like I was."

Miley appeared capable of challenging for an upset victory while keeping pace with Clanton early in the race, but he faded through the second half. Still, the 29-year-old former Lernerville track champion was encouraged by his solid performance in his Colussy Chevrolet Rocket Chassis.

"It feels real good to do this on the first night," Miley said. "Sometimes it's hard to get in and go with these guys because they're just so fast and on top of their game.

"I think we could run with Clanton in open track. But I guess I kind of lack the experience getting through traffic like that and just being comfortable running the front of a World of Outlaws race. But now we got some experience with that and it's definitely a confidence booster."

Johnson, of Latrobe, Pa., faded to sixth at the finish with 13th-starting Austin Hubbard of Seaford, Del., finishing seventh. Zeigler, the Chalk Hill, Pa., driver who set fast time during Thursday's qualifying, ended up eighth in the feature. Chase Junghans of Manhattan, Kan., advanced from his 21st starting spot to finish ninth, while Chub Frank of Bear Lake, Pa., rounded out the race's top 10 finishers.

Leading WoO rookie Brandon Overton of Evans, Ga., missed Thursday’s event after his MasterSbilt Race Car suffered heavy damage in a wreck during the previous WoO race on Tuesday at Weedsport (N.Y.) and a new car couldn’t be prepared in time. Overton, who plans to compete at Lernerville on Friday, was awarded 60 hardship points for Thursday’s race.

The Firecracker 100 presented by GottaRace.com continues on Friday with another preliminary night featuring a complete WoO program of time trials, heat races, Last-Chance Showdowns and a 30-lap, $6,000-to-win A-Main. Drivers’ best finishes in the preliminary events will determine their starting spots in heat races for Saturday's 100-lap, $30,000-to-win Firecracker 100 finale.

With rain still threatening, the 10-minute horn to line up the feature was blown almost immediately after the B-Mains concluded. The 30-lapper should be on the track by 9:15 p.m. … Jared Miley will start from the pole position in the 30-lap feature after finishing second in the fourth heat. Miley battled hard for the lead with Darrell Lanigan but couldn’t overtake the defending Firecracker 100 champion. … Mason Zeigler and Chase Junghans actually turned the same lap times in qualifying — 15.336 seconds — but Zeigler was awarded fast-time honors because he logged his clocking first. … Junghans spent half of the second half battling for the lead with eventual winner Chub Frank, but on a restart with three circuits left the 22-year-old slid high in turn two and fell all the way to sixth place — a slip that cost him a transfer spot. He ultimately qualified through a B-Main. … Rain hit the track during the afternoon — varying in intensity for a couple hours — but ended around 4:30 p.m. The pit area quickly came to life and the Lernerville track surface was able to whip the racing surface into race-ready condition in plenty of time for hot laps to start virtually on schedule. … A less-than-desirable weather forecast for the weekend clearly contributed to the Firecracker 100’s opening-night car count falling below 50, to 44 entries. Among the long-distance travelers who decided to call off planned trips were Jonathan Davenport, Jimmy Owens, Jimmy Mars, Earl Pearson Jr., Dale McDowell, Mike Marlar, Kent Robinson and Dan Stone. … Two-time Firecracker 100 winner Scott Bloomquist made the trip but was behind schedule; he called officials shortly before the drivers’ meeting and said he was just reaching the Pittsburgh area and he didn’t arrive in time to make a qualifying run. ... WoO rookie contender Brandon Overton isn't on hand after the only car in his arsenal sustained heavy damage in a tangle during Tuesday night's feature at Weedsport (N.Y.) Speedway. He traveled to the MBH Race Cars shop in Martinsburg, W.Va., in hopes of getting a car together for Friday and Saturday night's action at Lernerville.