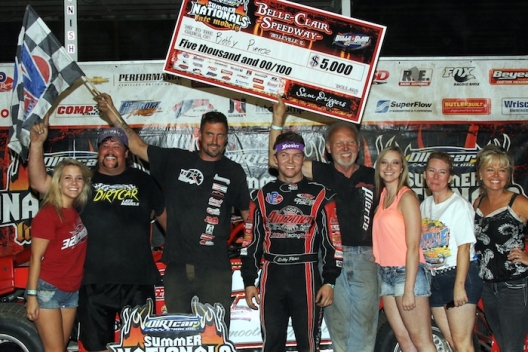 BELLEVILLE, Ill. — While Bobby Pierce entered Wednesday’s UMP DIRTcar Summernationals event at Belle-Clair Speedway with two victories in his previous two visits to the fifth-mile oval, it’s a place where he’s found he needs to bring along extra body parts for his car.

“In qualifying, the car was so tight and I knocked the whole deck off — my dad was pretty mad about that, so I made sure to not do that again,” said the 18-year-old driver from Oakwood, Ill. “My crew guys work their butts off. Every time I come off the racetrack they’ve gotta fix the spoiler it seems like.”

Despite the damage inflicted on his No. 32, Pierce was able to keep it in one piece to grab another victory at the tiny track, earning $5,000 for his second Summernationals victory of the season as he extended his series points lead.

The polesitting Pierce had his hands full with Rodney Melvin of Benton, Ill., after a mid-race restart, but he pulled away down the stretch, taking the checkers nearly three seconds ahead of Moweaqua, Ill.’s Shannon Babb, who saw his two-race winning streak on the Summernationals come to an end.

“I was watching my dad (chassis builder Bob Pierce) the whole time and I knew someone was getting close to me before that (lap-20) caution, and I was thinking about my tires and I had a soft left-side, so I didn’t want to kill 'em in the slick,” Pierce said. “But once the laps started winding down, I just said 'Screw it,' I’m just going to burn 'em to the ground if I have to and try to get this lead opened up so I have some space (so that) if I screw up nothing’s going to happen.”

The seventh-starting Babb took second from Melvin on the 36th of 40 laps but lost seven-tenths of a second to Pierce in the closing laps as the leader pulled away. Ryan Unzicker of El Paso, Ill., was fourth and 11th-starting Brandon Sheppard of New Berlin, Ill., rallied late to finish fifth.

At the race's outset, Pierce edged away to a comfortable margin over Melvin while third-running Daryn Klein held up the rest of the pack over the first 10 laps until Rick Salter, briefly pinning Klein’s car against the frontstretch wall, slipped by on the 12th lap open up a tight pack.

Up front, the middle-groove running Melvin was hanging with the high-flying Pierce while Babb was more than a straightaway behind by the time he got to third on lap 17.

When Kevin Weaver drew the race’s lone caution by stopping at the end of the frontstretch, Melvin turned up the heat on Pierce, nearly pulling alongside a few times. Pierce clipped the frontstretch wall on lap 22, then Melvin drifted into Pierce’s car on the backstretch on lap 25 as the frontrunners touched but kept rolling.

Entering traffic, Pierce moved high and low to find the best path, and began edging away with 10 laps to go. By lap 35 he had a cushion of four lapped cars as Babb and Melvin battled for second. As long as Pierce kept the dented fenders on it — and he did — it was all but over.

“I saw Melvin on the restart, and he was really good on the bottom, so I just knew I had to do something,” Pierce said. “It actually, the cushion got easier to drive because it got slick on the cushion. This is like one of the only places I’ve ever seen do that.

“The whole cushion is actually slick, so it’s like a mound of dirt and you can run up on it and go. So it just kind of got easier to drive, and as the race went on, laps counting down, I could really get on the tires a lot more. Because early, I don’t want to put the burn the tires off on the first lap, you know, and then I really started to get on it there at the end and started to pull away.”

“The 40 laps went by quick tonight. We started seventh and was able to wiggle around a little bit and get in there, but you know, starting up front is where you need to be at here,” Babb said of the tight track with inside and outside walls. “It’s hard to pass, really. Tonight there was a lot of traffic out there and it worked to our advantage, but just not enough laps.”

Melvin posted a third-place finish in just his second start of the season, but said his choice of three harder-compound tires might’ve hurt his chances.

“I was just pushing the right-rear too hard trying to run with Bobby, trying to make him make a bobble, because he was bouncing off the wall,” said Melvin, who had Kentucky driver Tanner English assisting him in the pits. “To run with these guys that race every night, that shows we can run. We’ve just gotta get back in the groove again.”

A brief power outage on the 18th lap of the modified feature left the track dark, but it appeared the track's power was quickly restored. The track lights should be back up to full power by 10:20 p.m. ... Last year’s Belle-Clair winner Bobby Pierce drew the pole for the 40-lap feature with Daryn Klein alongside. Tyler Erb and Rodney Melvin start in the second row. … Melvin is the elder statesman among the four heat winners. … Tyler Erb came up from Texas to run a week worth of Summernationals with mixed success. “This is my favorite night so far,” the youngster deadpanned. He found Belle-Clair a smaller version of Greenville (Miss.) Speedway. ... Provisional starters: Jason Feger, Mike Hammerle, Matt Weidner and Jim Moon. ... Missing from the feature lineup was Dennis Erb Jr., who was running second in the B-main on a restart with one lap to go when Moon spun him exiting turn four. Erb had an animated conversation with series director Sam Driggers, arguing he should've maintained his spot because the race hadn't official restarted. Driggers told him he'd discuss it with officials later, but Erb left dissatisfied. ... As the drivers sat in the infield after the incident, Erb walked over to Moon to discuss it. "I asked him what was he thinking. He said: I wasn't. I said that's your problem." ... Moon was in line to receive a provisional no matter where he finished the consy while Erb had to load up.

Polesitter Michael Kloos raced to victory in the 12-lap consolation race, earning a spot in the main event along with Ryan Little, who inherited the last transfer spot in a strange turn of events. Dennis Erb Jr. was set to restart second on lap 11, but Jim Moon got into Erb's machine exiting turn four, sending Erb round. Erb and Moon were sent to the tail for the restart; Moon retired while Erb pulled to the scoring stand to protest the call. The lone caution flew just as the white flag flew as third-running Jake Little had a flat right-front tire after getting into the backstretch wall; he'd been pressuring Erb for the final transfer spot before his demise.

Bobby Pierce didn't let a little spoiler damage stop him from rolling in the high groove as he built a straightaway lead by halfway and cruised to victory. Polesitter Billy Moyer Jr. finished a distance second while Timothy Culp held third most of the way before losing the spot to Jason Zobrist on the second-to-last lap. Jake Little nearly stole the final transfer spot, but Culp held on in the caution-free prelim.

Looking for his biggest victory, young Texan Tyler Erb jumped into the lead from outside the front row and held off four of the best from Illinois in the 10-lap heat. Erb rode the high groove to victory over fast qualifer Shannon Babb and fifth-starting Brandon Sheppard while Kevin Weaver got the final transfer spot. Dennis Erb Jr., no relation to the winner, was fifth. A lap-two caution appeared when Richie Standridge spun on the frontstretch.

Outside front-row starter Daryn Klein got the jump on polesitter Rick Salter and raced to a 10-lap victory. Salter pressued Klein in the low groove but settled for second while Tim Manville and Jason Suhre got the final transfer spots. A lap-two caution appeared when Kyle Hammer stopped in turn two. Trevor Thornton nearly climbed the turn-four, railroad-tie wall on the third lap, but brought his car back down to the racing surface.

Polesitter Rodney Melvin pulled away from an early battle with fellow front-row starter Ryan Unzicker and won the 10-lapper in his first series action of the season. Melvin edged away to win comfortably ahead of Unzicker and Jason Riggs. Chad Zobrist nearly lost the fourth spot when he got sideways in turn one on the eight lap, but he was able to fend off Michael Kloos. The first start was called back when Jason Riggs stopped exiting turn four. The second caution appeared on the second lap when Darrel Moser ended up against the frontstretch wall; he was towed to the infield.

Shannon Babb of Moweaqua, Ill., will be gunning for his third straight UMP DIRTcar Summernationals victory as the tour moves to one of its smallest ovals with a $5,000-to-win event at Belle-Clair Speedway, a fifth-mile oval just east of St. Louis, Mo.

Babb is among entries along with series points leader Bobby Pierce of Oakwood, Ill., Jason Feger of Bloomington, Ill., and Ryan Unzicker of El Paso, Ill., as the weather-hampered tour nears the halfway point.

The program will be made up of hot laps, time trials, heat races, consolation races and a 22-car main event.

A Shannon Babb victory would pit him into the lead as the all-time winningest series driver over Billy Moyer, who is winless on the series this year but is expected to rejoin it Friday in Paducah, Ky. They have 89 victories apiece. … Billy Moyer Jr.’s team spent the afternoon repairing a faulty generator that’s been giving them fits. They hope changing the regulator did the trick. … His pit neighbor, Jason Feger, has spread mesh netting on the liftgates of the haulers alongside his, provide a little shade on a Belle-Clair evening that’s not quite as sultry as usual. … Tanner English of Benton, Ky., is back on the tour, but as a crew chief instead of a driver. He’s helping out seven-race Summernationals winner Rodney Melvin, his girlfriend’s father. Melvin was among the fastest qualifiers. ... Dave Thornton scratched after hot laps. ... Two-time Belle-Clair winners Dennis Erb Jr. was piloting one of his Barry Wright Race Cars instead of the Black Diamond Chassis that's been successful in recent weeks.