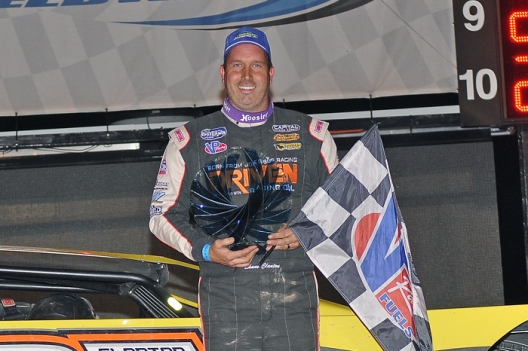 WEEDSPORT, N.Y. (June 23) — Shane Clanton made the most of the World of Outlaws Late Model Series’s visits to New York.

Completing a sweep of the national tour’s two 2015 Empire State stops, Clanton, 39, of Zebulon, Ga., led every lap of Tuesday night's Finger Lakes 40 at Weedsport Speedway to earn an $8,650 victory in the final round of the WoO Great Northern Tour.

Clanton’s series-leading sixth WoO victory of the season followed his win in the Great Northern Tour opener at Fonda (N.Y.) Speedway on June 18 and a runner-up finish in the northern trek’s other completed event at Brighton (Ont.) Speedway on June 20. He’ll look to put an exclamation point on the WoO’s early-summer trip north when the series heads to Lernerville Speedway in Sarver, Pa., this weekend for the $30,000-to-win Firecracker 100 presented by GottaRace.com.

"It's awesome to come up here and run like we have and leave New York with two wins," said Clanton who stretched his points lead to 128 points over Josh Richards of Shinnston, W.Va. "We've got things rolling along like we need it to right now. With the way we're running, I think we've got a car to go win Lernerville too."

Clanton was in control all night at Weedsport, beginning in time trials when he lowered the 3/8-mile oval's Dirt Late Model track record with his lap of 14.831 seconds. He led every lap of his heat race and later drew the pole starting spot in the night's top-six redraw.

Clanton’s only marginal threat during the 40-lap A-Main came from 14th-starting Tim McCreadie of nearby Watertown, N.Y., who reached second place on lap 23 and briefly pressured Clanton following a lap-29 restart. But the 41-year-old McCreadie couldn't match Clanton's pace as the final 11 laps ran caution-free.

McCreadie settled for second, 1.659 seconds back of Clanton at the checkered flag. Defending WoO champion Darrell Lanigan of Union, Ky., charged from 13th to third with seventh-starting Chase Junghans of Manhattan, Kan., taking fourth. Fifth-starting Morgan Bagley of Longview, Texas, ran as high as second before dropping back to fifth at the finish.

Clanton's dominating performance gave him even more breathing room in the WoO championship battle as he chases his first series title. He added a whopping 34 points to his advantage — pushing it to 128 points — thanks to both his victory and a 17th-place finish by Richards.

Coming off his victory in Saturday's race at Brighton, Richards started third and ran as high as second before tagging the inside wall entering turn one on lap 15. The damage to the front of his Rocket Chassis house car eventually caused Richards to slow and retire from the race with 23 laps complete.

For Clanton, the victory was a continuation of his turnaround season after a 2014 WoO campaign that saw the series veteran go winless for the first time ever on the series.

"It's just dedication and hard work and the will and desire not to give up," Clanton said of his astonishing rebound in 2015. "It takes a whole team effort to get to where I'm at."

While he may have fallen one position short of a home-state victory that would've ended his season-long WoO winless streak, McCreadie's runner-up effort continued his improved performance during the Great Northern Tour, which also saw the 2006 WoO champion drive his Sweeteners Plus Rocket Chassis to finishes of fifth at Fonda and third at Brighton.

Tuesday's finish was perhaps the hardest-earned of McCreadie's three consecutive top-five performances. He had to overcome a scrape with the wall in hot laps and a brake-line failure in qualifying before making his charge in the feature.

"He's the man right now," McCreadie said of Clanton and his stellar season. "It's a shame I stuck it in the fence in hot laps then broke a brake line in qualifying. It just put us back. But it is what it is. We try to run as hard as we can."

Like McCreadie, Lanigan remains winless on this year's WoO campaign, but Tuesday's solid run gives the three-time and defending series champion hope of a turnaround during the second half of the season.

"We had a good car tonight," Lanigan said of his GottaRace.com Club 29 Race Cars house car. "We've been throwing some stuff at it. Been a little off at the beginning of the year … just trying to get some stuff together so we can run better in the second half."

The race was slowed by six cautions with the first appearing when Bryan Bernheisel of Lebanon, Pa., slowed on the back straightaway. The yellow flag waved again just after the ensuing restart when sixth-running Tim Fuller of Watertown, N.Y., ended up spun in the infield after a scramble on the front straightaway.

A tangle between Brandon Overton of Evans, Ga., and Rick Eckert of York, Pa., necessitated another caution on lap 14, while Richards' run-in with the turn-one wall forced him to slow and draw the race's fourth caution on lap 23. A lap-28 caution was for the slowing machine of Jordan Yaggy of Rochester, Minn., and a spin by Chad Hollenbeck of Montrose, Pa., caused the race's final caution with 29 laps complete.

Tuesday's race wrapped up the WoO LMS Great Northern Tour. Clanton and Richards split victories in the first two Great Northern Tour events with Clanton winning at Fonda on June 18 and Richards claiming the June 20 event at Brighton. The tour's third event was scheduled for June 21 at Cornwall (Ont.) Motor Speedway but was rained out.

The Great Northern Tour serves as a precursor to one of the season's biggest race weekends in Lernerville Speedway's ninth annual Firecracker 100 presented by GottaRace.com. The crown jewel event features three nights of WoO LMS action kicking off Thursday, June 25 and building toward the 100-lap, $30,000-to-win Firecracker 100 finale on Saturday, June 27.